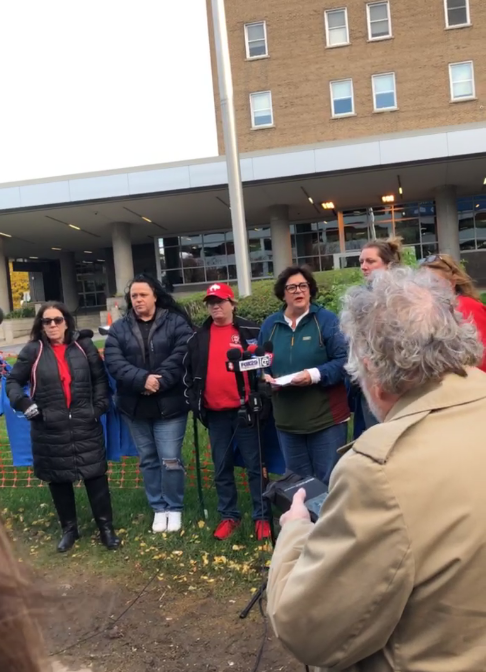 (BUFFALO, NEW YORK) – Today (Tuesday, November 2nd) is Day 33 in the Communications Workers of America’s Strike at Catholic Health System’s Mercy Hospital and while CWA Bargaining Members thought they were close to a deal at the negotiating table over the weekend, it was stopped short by Catholic Health’s stance on not committing to serious staffing ratios, CWA District One Area Director Deb Hayes tells WNYLaborToday.com.

“We bargained all last week and over the weekend and into the early hours of Sunday morning.  We’d made ‘significant process’ and ‘were incredibly close’ to reaching an agreement, but the last unresolved issue was staffing issues.  We’re ‘dealing with horrendous’ conditions (inside Mercy Hospital) ‘and we need guaranteed’ ratios of (Caregivers) to patients.  ‘This is what our Strike is all about,’” Hayes told Your On-Line Labor Newspaper.

CWA District One Vice President Dennis Trainor, who’s been participating in the negotiations, issued the following statement: “Bargaining continues to be productive and we are hopeful that a resolution is on the horizon. The reality is that Catholic Health is trying to go backward on staffing and its proposal would create ratios in Medical-Surgical Units that are worse than the current management-created staffing grids.  We are ready to put this Strike behind us and get back to work and as soon as Catholic Health agrees to staffing ratios that are safe for Staff and patients, we can do that.”

Hayes (pictured above during a CWA news conference held outside Mercy Hospital on Monday) told WNYLaborToday.com a one-to-four Caregiver-patient ratio in the Medical-Surgical Units and a one-to-one or one-to-two ratio in the ICU (Intensive Care Unit) is what the CWA is looking to establish.

“Right now, we ‘are not’ bargaining and ‘there is no schedule to be back at the table,’” she added.  “We’ve told the mediator that ‘we are ready, willing and able (to go back), but Catholic Health continues to put out Anti-Union statements and their lies are infuriating.’  ‘They’re trying to pit the Union against its Members.’”

Hayes was referring, in part, to Catholic Health’s announcement that it would terminate health benefits for striking CWA Local 1133 Caregivers, which Trainer called “a blatant attempt to intimidate the workers into ending their Strike before a fair agreement is reached.”

“It won’t work, just like all of Catholic Health's other threats up until now,” Trainor said in a released statement.  “The CWA national Members Relief Fund (MRF) has ($425 million) in it.  As of this week, the Union’s weekly benefits for Strikers have been increased to ($400), on top of New York State Unemployment Benefits for which they are eligible.  The MRF will also ensure that no Striker faces any financial hardship for a medical or dental emergency of any kind, and that medical care for chronic conditions will be continued.  CWA Local 1133 Members at Mercy Hospital remain united and strong, determined to last one day longer in order to win a fair contract that guarantees that there will be safe staffing in every department of the hospital. Catholic Health patients need and deserve nothing less."

Over the course of the past four-plus weeks, the Union has received an extraordinary amount of support from the Western New York Community and the Labor Movement, as well as a number of extremely high-profile elected officials on the local, state and Federal levels who have spoken out in favor of the striking Caregivers at Mercy Hospital, who are manning a picket line 24/7.

On another front, the CWA released a TV ad that is currently airing in Buffalo and sheds light on what Union Representatives describes as a “dire situation” at Catholic Health, which led to the Strike.

The CWA ad can be viewed at: https://www.youtube.com/watch?v=WPgtUkEmOOw