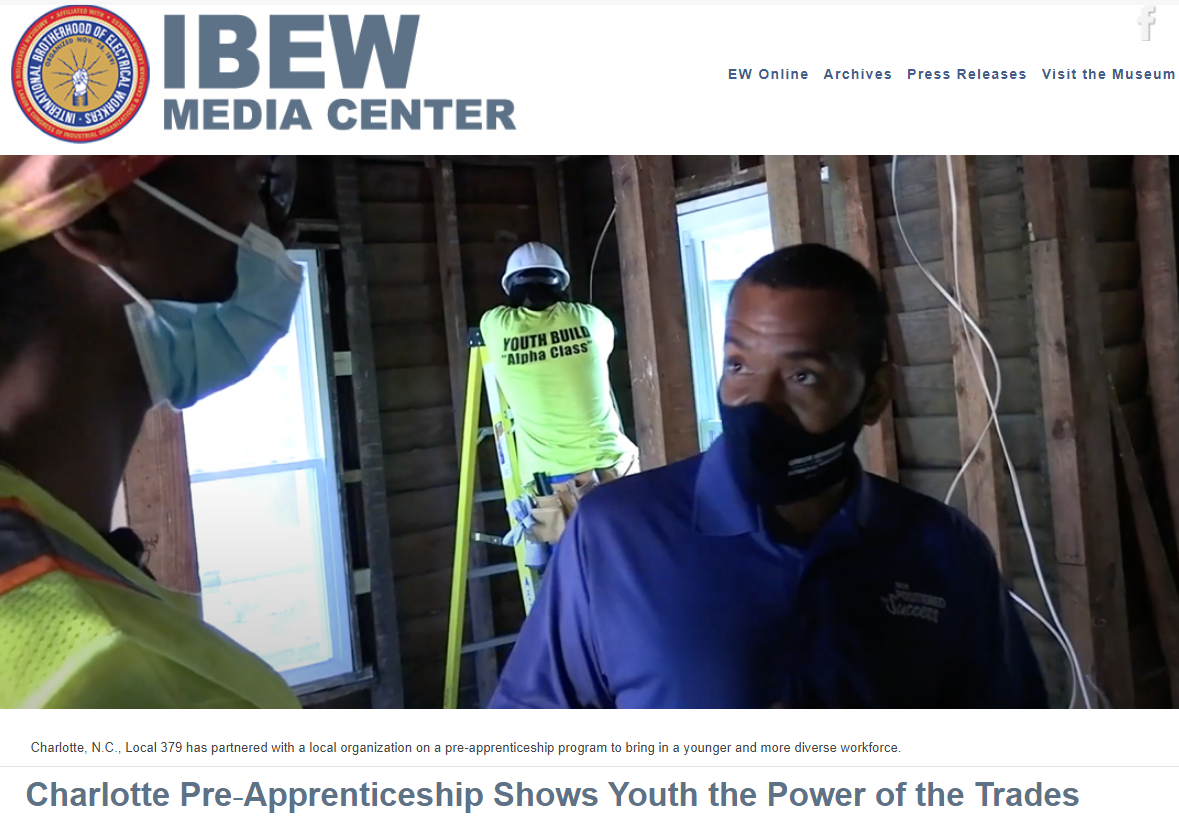 (CHARLOTTE, NORTH CAROLINA) - The saying, "If you can't see it, you can't be it," could apply to many of the young people who come through Grace-Mar's doors when it comes to choosing a career.  So, Charlotte, North Carolina International Brotherhood of Electrical Workers (IBEW) Local 379 is helping them to "see" themselves as Union Electricians.

"Most of these kids don't know what they want to do just yet, so we show them a way to make a good living as an Electrician," IBEW Local 379 Organizer Eddie Byrams said.

Grace-Mar is a local organization that works with young people age 16-to-24 who are no longer affiliated with a school.

One of their programs is YouthBuild, a national program run by a grant from the U.S. Department of Labor.

The Pre-Apprenticeship offers participants an introduction to the Unionized Trades, including electrical, which is where Local 379 comes in.

"It's a pleasure working with the young adults in the Grace-Mar program," Local 379 Business Manager Scott Thrower said. "I hope our Brothers and Sisters inspire many of them to consider a career in the IBEW."

The relationship between the two partners began in 2019 when Grace-Mar reached out to Local 379 to help them with the program.

At first it was mostly Byrams going out and talking to the youth.

"We give them an avenue, a way to improve themselves," Byrams said. "And it's not just electrical, it's also moral and intellectual."

The Pre-Apprenticeship is a six-month program that comes with a stipend, leadership training and high school credentialing among numerous other wraparound services to ensure that participants have the support they need to be successful.

Those services run the gamut from resume writing and interviewing to financial counseling.

"Those soft skills are essential," said Grace-Mar Co-Founder Grace Smith. "They come out not just with a certificate, but with a new outlook, a new brand, and a new attitude."

For a lot of Grace-Mar's participants, most of whom are People of Color, the Trades often just aren't on their radar.

"Seeing successful Minorities is important," Byrams said. "For a lot of young People of Color there's an assumption, almost like it's ‘in the air,’ that the Trades aren't for them."

Fortunately, that assumption is being challenged.

Thanks to grant funding, Grace-Mar was able to acquire a home that needed renovating and could double as a hands-on classroom where Byrams and others gave the young men and women a taste of the Trade.

"The kids loved it," said Grace-Mar Co-Founder Kenny Smith. "The electricians were very approachable.  They didn't talk down to them, they talked to them.  They brought that human aspect that says, 'I'm like you.'"

To Continue Reading This Apprenticeship And Training Labor News Story, Go To: www.ibew.org/media-center/Articles/21Daily/2110/211027_Charlotte