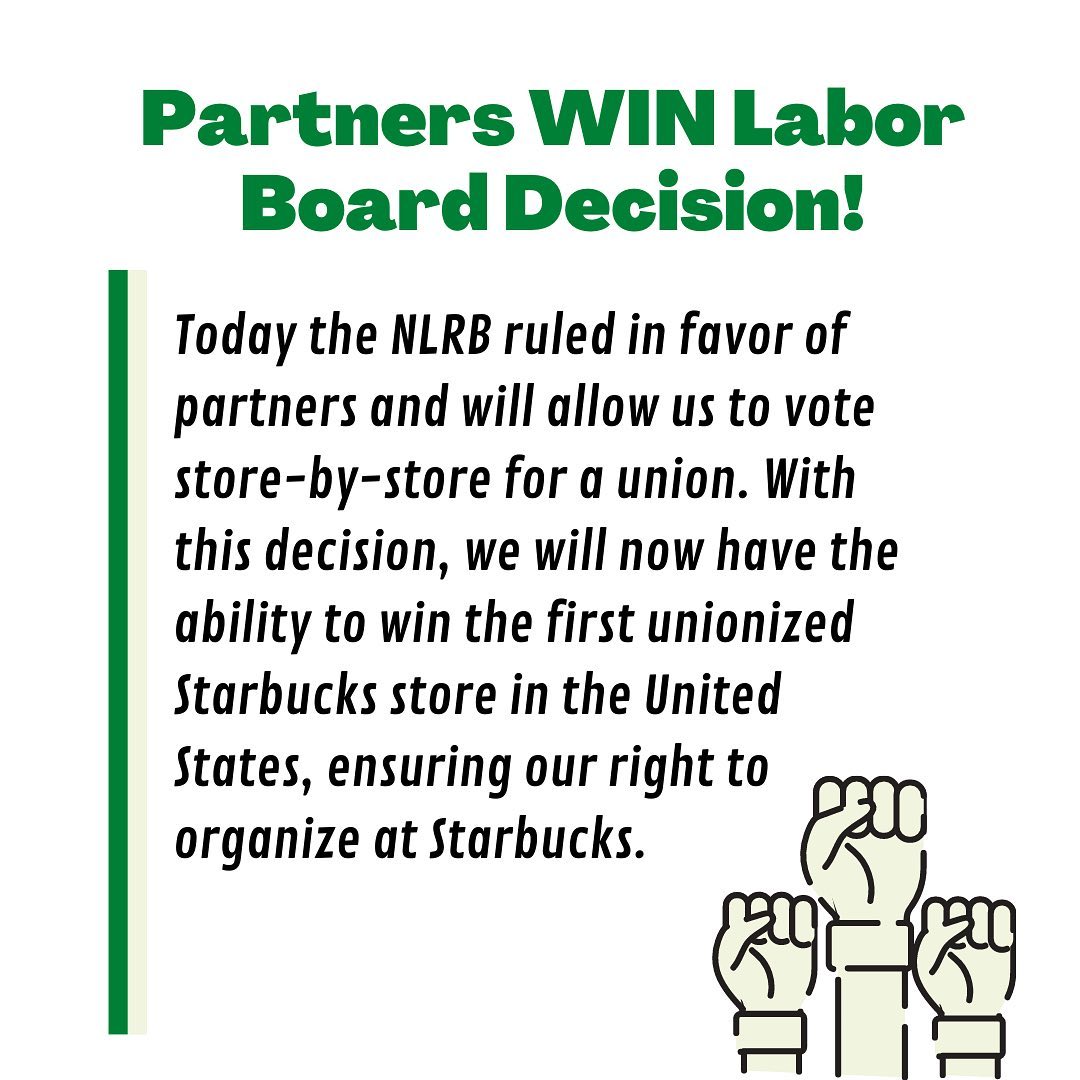 (BUFFALO, NEW YORK) - The Acting Regional Director of the National Labor Relations Board’s (NLRB) Buffalo Office has issued a decision that will allow Starbucks Partners to vote in separate Union Elections at individual stores, as requested by SBWorkersUnited, the Union seeking to gain Union recognition for the Workers.

The Union Elections for the three stores will be held by mail ballot between November 10th and December 8th.  The ballots will be counted by the NLRB on December 9th.

"We’re going to become the first Union Starbucks in the United States,” said Michelle Eisen, a local Starbucks Partner and Member of the SBWorkersUnited Organizing Committee.

“It’s been disappointing to see Starbucks working overtime to try to stop us from organizing, but (this) decision is a big win and soon we’re going to have an even bigger victory when we vote our Union in," Eisen said.

In a released statement, SBWorkersUnited said:

(This) decision is a victory for us as Starbucks Partners and for all Workers facing similar petty delay tactics and Anti-Union campaigns across the United States.

We look forward to our Union Elections and view (this) success as an exciting milestone on the path to winning a true partnership with the company.

This marks a significant victory in our Union Campaign, said SBWorkersUnited, which has been fighting for the right to unionize and gain a voice in their workplace and a true partnership within the company.

Starbucks has met our efforts with delay tactics, hostility and intimidation, but this decision shows they are not prevailing, SBWorkersUnited said.

Partners at the Elmwood Avenue, Genesee Street and Camp Road stores in the Buffalo area filed three individual petitions with the NLRB in September, asking for individual votes on whether Workers wanted to Unionize.

Decades of Federal Labor Law precedent back up individual stores as appropriate Units.

Starbucks attempted this in Buffalo, but failed, SBWorkersUnited said.

The speed and clarity of the NLRB decision also makes clear that Starbucks’ decision to raise legal issues before Union votes were even held was a delay tactic, SBWorkersUnited said.

The company forced a six-day hearing at the NLRB over the issue of whether SBWorkersUnited should vote in store-level elections.

Despite this, the NLRB’s Buffalo Office issued its decision in less than two weeks and dismissed every argument Starbucks made.

Starbucks’ attempts at delay have been coupled with an intense Anti-Union campaign as the company has held numerous Anti-Union meetings to spread misinformation and try to “scare” the Workers out of organizing, SBWorkersUnited said.

Starbucks has also flooded stores with out-of-town executives in order to spy on, coerce, and intimidate their Partners, likely in anticipation of the company losing at the NLRB, SBWorkersUnited said.