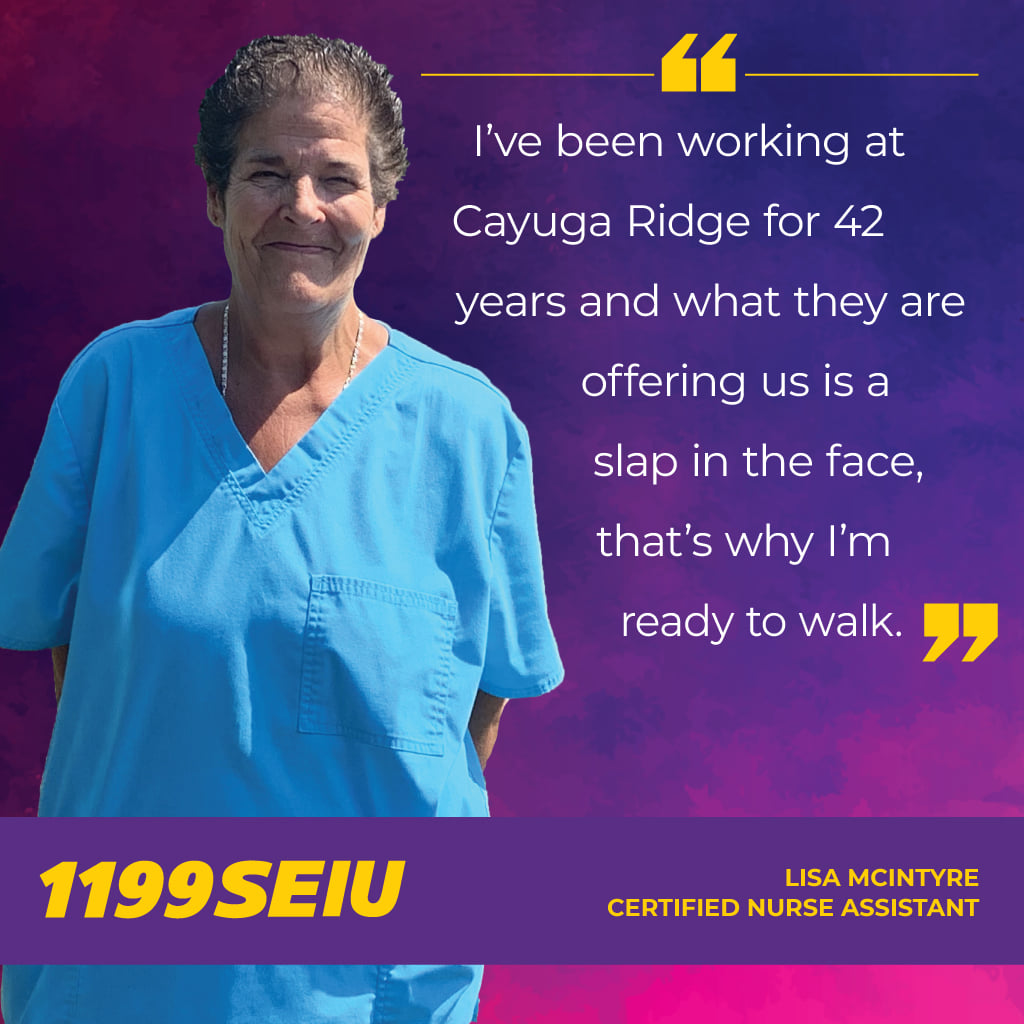 (ITHACA, NEW YORK) – 1199 Service Employees International Union (SEIU) Healthcare Workers East-represented Employees at the Cayuga Nursing and Rehabilitation Center near Ithaca were on the picket line for the second time this year this week as negotiations on an updated contract at the nursing home are at a standstill - which has made it difficult for the facility to address the on-going staffing shortage.

Last month, the Workers held a rally to protest the lack of a fair contract and management’s concessionary proposals - increased health insurance costs, lack of a secure retirement, and below market wage increases.

“This employer is denying fair wages and important benefits to Workers while continuing to hire out-of-town agency staff to come work for higher rates,” 1199SEIU Organizer Emmanuel White said. “The New York City based owners of Cayuga Ridge, Shalom and Barry Braunstein, are disrespecting Essential Health Care Workers by not working harder to reach an agreement at the bargaining table.”

CNA Nicole Murray said: “We are very short staffed, even before the (Coronavirus) Pandemic.  On my unit there are thirty-seven residents and only one Aide and me until seven p.m.  I work on the dementia unit and it’s hard and exhausting.  Our residents need a lot of care and it’s a safety issue for them and me.  We need more staff because residents deserve quality care and with so many of them and so few of us, it’s impossible to do sometimes.”

Last March, the Workers contract expired and talks were put on hold due to the pandemic.

As a result, the Staff has been working through the pandemic without a contract.

Negotiations have resumed, but Workers feel like they’ve reached a stalemate.

Long time LPN Lolita McComb said it has been stressful not having a contract, especially with all the additional risks associated with her job: “It’s kind of scary when you’re not working with a contract.”

McComb said that the prolonged discussions haven’t just had a toll on Workers, but on the residents of the nursing home too, as the negotiations have put a damper on hiring efforts.

The increasingly competitive labor market in the healthcare industry has not helped either, with everyone from county health departments to home health agencies desperate for health workers.

“Nobody wants to walk in this building and apply for a job when they don’t know if we’re going to go on Strike,” McComb said. “We’ve got to get this over with and start getting some Staff back in this building.”

This is not the first time the Workers have been on the picket line this year.

There was another rally in September, but all agree there has not been much progress since then.

Some of the biggest sticking points have been benefits like health insurance, pension plans and regular pay raise schedules.

Some Workers, like Nursing Staff, were given a $4 raise in an effort to boost retention.

Others, like those who work in food service, did not see that raise.

To Read This Labor News Report In Its Entirety, Go To: https://wskg.org/news/second-ithaca-nursing-home-picket/