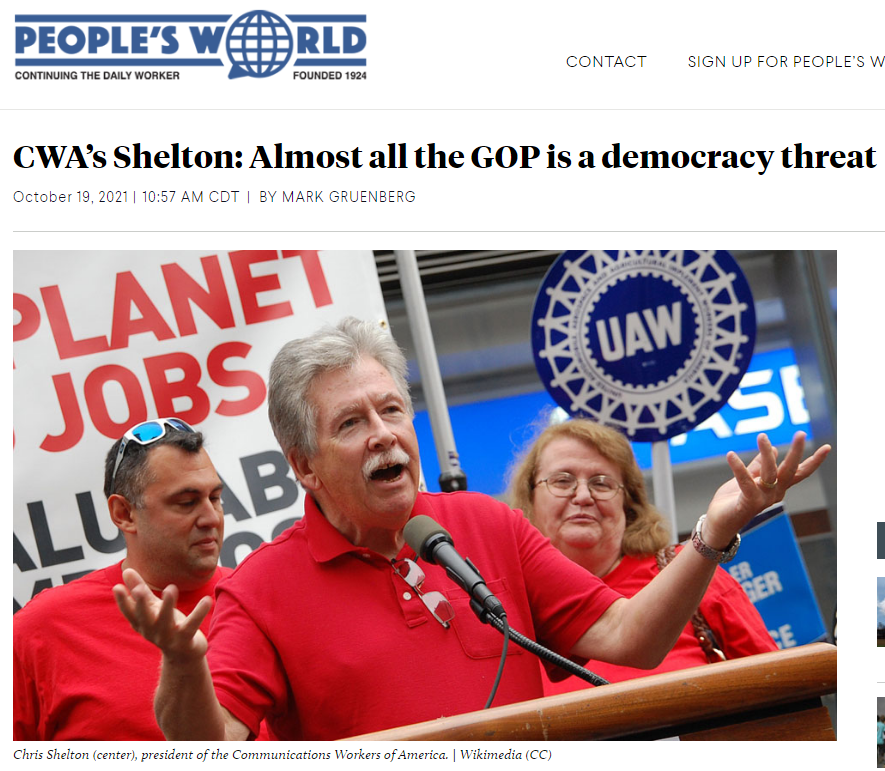 (WASHINGTON, D.C.) - At the last Communications Workers of America (CWA) Convention in Las Vegas back in 2019, Union President Chris Shelton - a blunt and tough Telephone Lineman from The Big Apple, excoriated then-GOP Oval Office occupant Donald Trump as a threat to Democracy.  Now, the Republican Party itself is that threat, he says.

This time, keynoting CWA’s virtual convention via Zoom, moved from New Orleans due to the resurgent Coronavirus Pandemic which has filled hospital ERs there to overcapacity, Shelton extended that threat classification to almost all of the GOP, citing Democracy along with public health.

“This has been a year and a half of political extremism,” Shelton told the delegates in mid-October.

It included, he said, “the decision of a sitting President,” Trump, “to refuse to accept the results of an election.

“And never before have extremists, carrying a Confederate battle flag, stormed the Capitol on behalf of a candidate who lost, lost, lost - by seven million votes.  And never before has a political party, with a few exceptions, lost its mind and accepted the spirit of hate in the insurrectionist mob of January Sixth,” he said.

That, of course is when thousands of Trumpites stormed and trashed the U.S. Capitol, determined, as their leader declared, to “stop the steal,” a war cry that Republicans from coast to coast, both officeholders and rank and file, are slavishly following.

“It’s migrated to the state capitals” in forms of invasions and threats, Shelton said.

There is one difference, though.

Now it’s “Republican State Legislators who wear suits,” not buffalo horns and camouflage fatigues, “and who want to make it harder to exercise the right to vote,” Shelton said.

“(But) They can’t win an election,” he continued. “So their Plan A is eliminating the right to vote of those they don’t want to vote.”

Electoral analysts say such anti-voter measures, which have passed in at least 15 states and have been introduced in 34 more, are deliberately aimed at People of Color and Workers of Color.

But they also delete voting rights of Women, other Minorities, young people, some of the elderly and Workers, too.

The foes’ “Plan B is to sow distrust of the elections and their outcomes” through repeated claims of voter fraud and botched recounts, first in Arizona and now in Wisconsin, Shelton said.

“And at the same time, the Proud Boys and the Oath Keepers are preparing for a violent civil war,” he warned.

Those White Nationalist Groups, along with their Nazi-like allies, led the January 6th invasion, urged on and commanded to march by their leader, Trump, though Shelton did not have to remind the CWA crowd of those facts.

But he did, in one sentence, vow Organized Labor in general - and CWA In Particular, will meet that threat.

“We will not sit back and let them destroy our Democracy!,” Shelton declared.

To Continue Reading This Labor News Story, Go To: www.peoplesworld.org/article/cwas-shelton-almost-all-the-gop-is-a-democracy-threat/