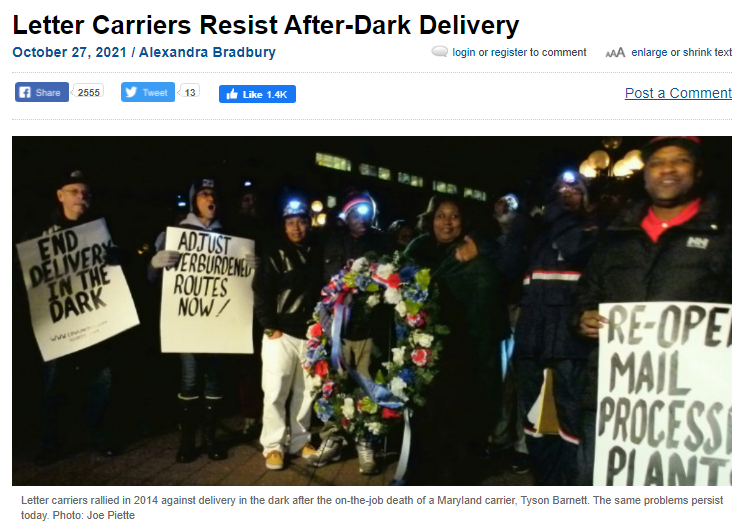 Once upon a time, a nip in the air and the crunch of leaves underfoot meant peak season for shipping - an annual onslaught of catalogs and Christmas cards and on-line shopping.

Those were the old days - since COVID-19 hit.

But the holiday rush and dwindling daylight can only intensify the crisis of understaffing and overwork at the United States Postal Service (USPS), where speed-up and harassment are management’s go-to when it can’t or won’t hire enough people to get the job done.

The National Association of Letter Carriers (NALC) in Chicago held a public protest in September against late start times and after-dark delivery.

NALC Branch 11 President Mack Julion said the Union won’t go along with giving out flashlights to new carriers on his watch.

Delivery after dark is dangerous - and not just in high-crime neighborhoods.

“Try doing anything in the dark,” he said. “Try cutting the grass.  Yeah, you maybe can get it done, but it’s a whole hell of a lot easier when the sun is out, isn’t it?”

Besides, Julion said, it is worse service: “Say it wasn’t dangerous.  Do you want your mail delivered to you at nine o’clock at night?”

Chicago Letter Carriers are so understaffed that every day about 100 routes go partially or completely undelivered.

Management denies this, so the Union started tallying the data to prove it.

Stewards in every Post Office send daily reports to the branch headquarters, where a spreadsheet is compiled.

Julion shares the data routinely with members of Congress.

And it’s not just in Chicago.

“There’s more hours than anyone wants, and more days,” said Dave Staiger, a Rural Carrier in Kalamazoo. “For example, I’m on day eight in a row of at least eleven right now, including Saturdays and Sundays.  Really Amazon has been dictating the pace.  Sundays they call ‘Amazon Sundays’ - when we go in, that’s all we’re delivering.”

Rural delivery, done from a vehicle, poses its own hazards in the dark.

A postal truck pulled over at a roadside mailbox may be struck by a car or a customer who isn’t expecting you in the driveway may mistake you for a prowler.

And then there’s the danger of driving fatigued.

On a few occasions, Staiger and his Co-Workers have pushed back against the long hours with collective action.

Once everyone individually filled out the form to register a safety hazard.

Recently, buoyed by an agreement between the Rural Carriers and management that delivery after 8 p.m. should be avoided, four out of five Letter Carriers declined to take a last round of packages out at that hour.

“And we didn’t face any discipline,” Staiger said. “The Postmaster did ask to see the statement from the Union and pointed out it doesn’t say ‘never,’ it just says ‘try to avoid.’”

To Continue Reading This Labor News Story, Go To: https://labornotes.org/2021/10/letter-carriers-resist-after-dark-delivery