âWhile Weâre Saving The World, Theyâre Planning Our Demise, It Seemsâ - What Is The 'Two-Tiered Wage System' Fueling Worker Strikes? 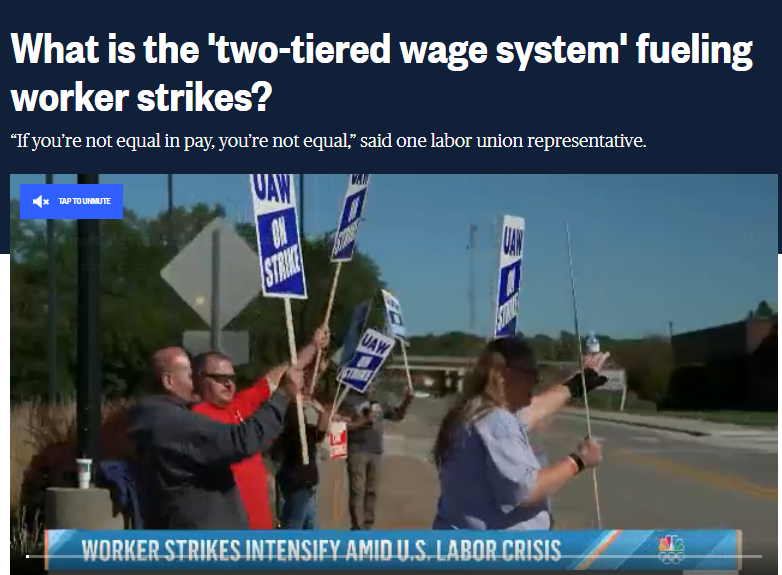 In growing numbers, Workers across the country are taking a stand and demanding better conditions, benefits and pay from their employers.

While their workplaces vary, ranging from Nabisco and Kellogg to John Deere to Kaiser Permanente, Employees are united in at least one of their grievances: Opposition to a Two-Tier Benefit and Wage System.

The policy, which is often adopted by companies as a way to cut costs, creates two different pay and benefit structures for existing and future Employees.

For the length of a given contract, existing Workers are grandfathered in and guaranteed certain benefits and pay rates, while future Employees are hired at a lower pay rate and often receive fewer or worse benefits.

Existing Workers oppose the policy for several reasons, including that it creates disparities among Workers doing the exact same job and essentially penalizes those who join the company later, which can hurt morale, create animosity and lead to high turnover.

“These future Workers are like ‘unborn babies,’” said David Woods, International Secretary-treasurer of the Bakery, Confectionery, Tobacco Workers and Grain Millers' International Union (BCTGM). “They don’t have a face or a name yet, but we know they’re coming behind us. Companies want to take away from future Employees and that isn’t acceptable.”

A Two-Tier Pay or Benefit System can also chip away at the power of Labor Unions since new hires may be less inclined to join, leading to lower Union Membership and divided workforces.

For existing Workers, there’s also the concern that adopting such a system could impact their future contracts, which might be subject to the lower-tier conditions.

While these Two-Tier Systems aren’t new, they’re certainly having a moment as Workers across industries actively resist them.

“Employers do them in waves because they tend to lead to low morale and if you institute them over and over again they cause more problems,” said Kate Bronfenbrenner, the Director of Labor Education Research at Cornell University's School of Industrial and Labor Relations.

“We see them whenever there’s an economic crisis.  There was a big push for them in the eighties, then a wave in the nineties and now we’re seeing them again.  It appears to be contagious,” she said.

Bronfenbrenner said these systems not only create frustration and tension - but can lead to productivity and safety issues.

She said it also doesn’t make sense to implement these systems when there are labor shortages like the ones currently being seen in low-wage jobs and health care.

In early October, Workers at Kaiser Permanente voted to authorize a Strike over unhappiness with workplace conditions and the possibility of a Two-Tiered System as they continue to struggle through the Coronavirus Pandemic.

“While we’re saving the world, they’re planning our demise, it seems,” said Kim Mullen, a Nurse at Kaiser South Bay in Los Angeles and a Union Officer who helped organize the Strike vote. “It’s so insulting after all we’ve done, that they’re being manipulative.”

To Continue Reading This Labor News Story, Go To: www.nbcnews.com/business/business-news/what-two-tiered-wage-system-fueling-worker-strikes-n1281938