74% Of Americans âSupportâ The Current Strike Wave - With Tens Of Thousands On The Picket Line, âSupport For These Actions Is At A 56-Year Highâ 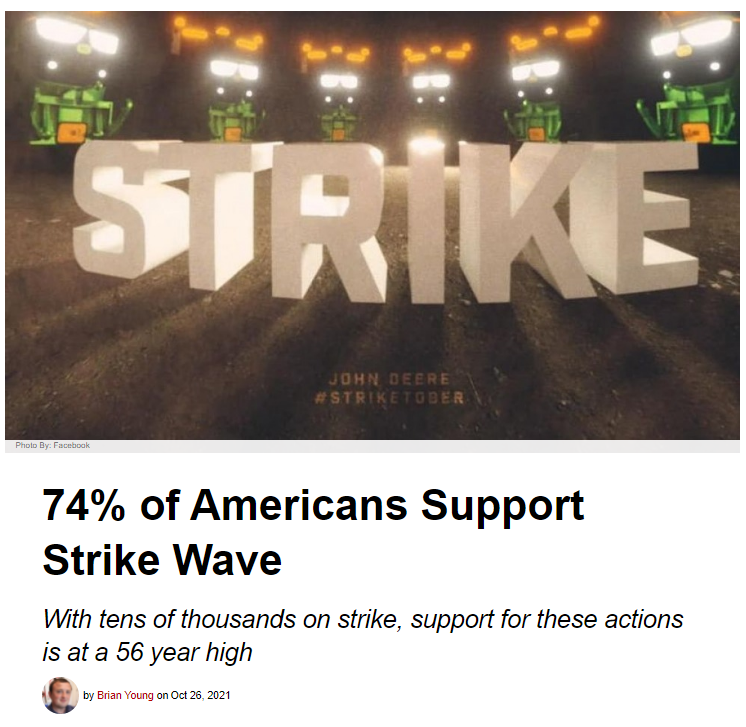 (WASHINGTON, D.C.) - A new poll from the National AFL-CIO shows huge support for the recent rash of strikes throughout the country.

The poll, which was conducted by the Progressive Pollster Data for Progress, asked 1,300 likely voters if they “approve” or “disapprove” of Employees going on Strike for better wages and benefits.

In the results, 74% of respondents either strongly or somewhat approved of the job actions.

This included 87% of Democrats, 72% of Independents and 60% of Republicans.

Support was highest among African Americans with 85% supporting them, while 72% of White voters supported the strikes.

“Voters of all ages, backgrounds and political parties agree: Working People can and should join together to win a better deal and a better life,” National AFL-CIO President Liz Shuler said through a spokesperson to HuffPost’s Dave Jamieson. “Every Union Member on a picket line today is stronger knowing the American people have their back.”

Data for Progress said that 74% approval of strikes was the highest level of support since 1965 when Unions were much stronger.

“I think across many dimensions the pandemic has really put Workers’ Rights at the forefront of public consciousness,” Winter told HuffPost. “The fact that we now see a bipartisan majority of voters who are backing Workers agitating for better pay, benefits, and working conditions, I think it’s reflective of the sea change the Coronavirus Pandemic has brought about.”

The increased support for strikes comes as Worker issues are moving to the forefront of many people’s minds.

With a tight job market, many employers are being forced to realize that years of low pay and decreasing benefits are causing their workforce to leave for greener pastures, causing many places to complain about their inability to properly staff their businesses.

At the same time, a huge wave of strikes that has not been seen in years has hit.

While some continue to drag on, strikes at Nabisco and Frito Lays won the Workers better contracts and just the threat of a Strike also led Hollywood studios to blink and reach a last-minute agreement with International Alliance of Theatrical Stage Employees (IATSE) to prevent a walk-out of 60,000 Workers that would have shut down TV and Film production.

That agreement is currently being voted on by IATSE Membership.

Workers are also using the tight labor market and approval for strikes to push back against the Two-Tiered Wage System that decreases wages for new hires and push for contracts that prioritize work-life balance.

This was a huge part of the reason Workers at Nabisco and Kellogg’s struck.

The Two-Tiered Wage System is also a big reason why 30,000 Health Care Workers at Kaiser Permanente have authorized a Strike and have prepared to walk out if negotiations go south.

To Directly Access This Labor News Report, Go To: https://ucommblog.com/section/union/74-americans-support-strike-wave?fbclid=IwAR3pAnkdSK3KbBV8WEGmi4fphxm_miRAYNsF7_cxZI8kSOBFIMVEueSw4vs