McDonald's Workers Walk Out At Restaurants In 12 U.S. Cities To Protest The Fast Food Giant's Handling Of Sexual Harassment Claims 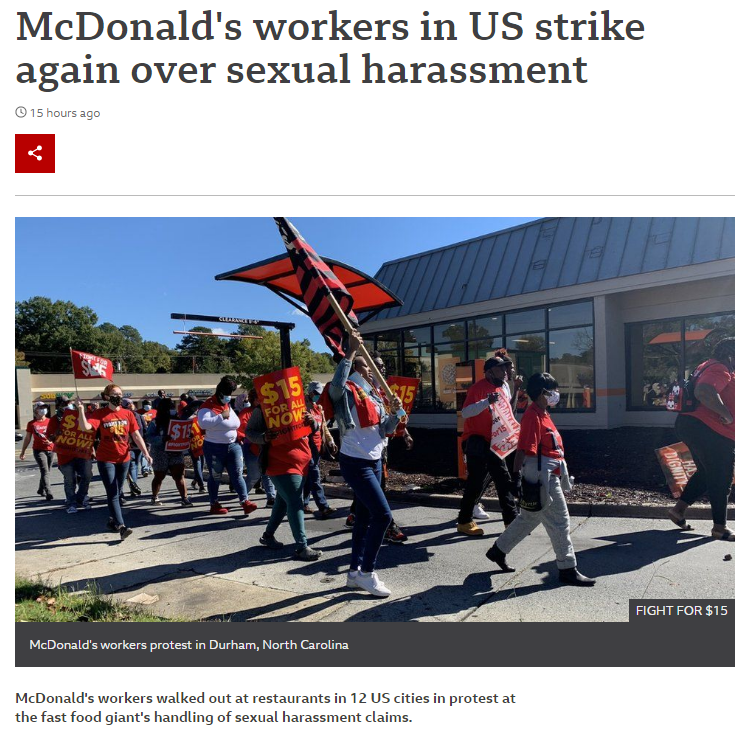 Organizers, who’ve held five strikes over harassment since 2018, say McDonald's has "largely ignored" Front Line Workers who complain.  As a result, Cashiers and Cooks walked out in Chicago, Detroit, Houston and Miami among other places on Tuesday (October 26th).

According to Fight for $15 Organizers, the campaign group that put together the national action, Workers have filed more than 50 complaints and lawsuits alleging harassment at corporate-owned and franchise McDonald's outlets since 2016.

Campaigners claim the chain does little to tackle the problem at franchise-run restaurants, which make up the majority, but also at corporate-owned outlets.

Moreover, Staff who’ve spoken out have faced retaliation, such as having their hours cut or being fired.

"I'm going on Strike because despite years of protests, McDonald's still refuses to take responsibility for the countless Women and teenagers who face harassment on the job at its stores across the globe," said Jamelia Fairley, a McDonald's Worker in Sanford, Florida. "No matter what McDonald's says, not much has changed for Workers like me."

In a 2020 survey of nearly 800 Female Workers at McDonald's restaurants and franchises, three-quarters said they were harassed at work.

In the same survey, which was commissioned by Labor Unions, 71% said they suffered consequences for reporting the behavior.

After a review of workplace safety earlier this year, McDonald's said it will require all Workers, at both corporate and franchise-owned stores, to undergo anti-harassment training from next January.

However, campaigners say the announcement is "short on specifics," including what might happen to those who fail to follow the rules.

To Read This Labor News Story In Its Entirety, Go To: www.bbc.com/news/business-59055359