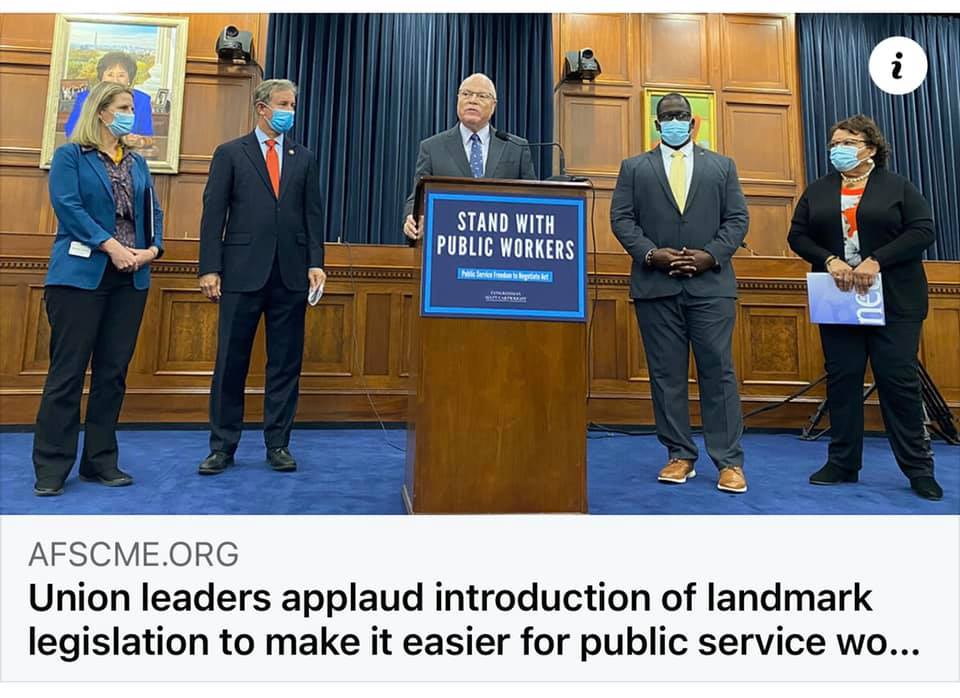 (WASHINGTON, D.C.) - The Public Service Freedom to Negotiate Act (PSFNA) has been introduced in the House of Representatives by U.S. Representative Matt Cartwright (Democrat-Pennsylvania) - a Bill that would set a minimum nationwide standard of Collective Bargaining Rights that states must provide.

The Act, which currently has 144 Co-Sponsors, would empower Workers to join together for a voice on the job not only to improve working conditions - but to improve the communities in which they work.

During a press conference held to announce the Bill’s introduction, American Federation of State, County & Municipal Employees (AFSCME) President Lee Saunders highlighted the sacrifices Public Service Workers have made over the past two years during the Coronavirus Pandemic.

“Health Care Workers, School Employees, Corrections Officers, Sanitation Workers, Behavioral Health Professionals and many more - they have stood fearlessly on the front lines to protect their neighbors from this pandemic,” Saunders said. “For all their service and sacrifice, they deserve the freedom to negotiate - to sit down with management, discuss terms of employment and hammer out a fair contract.”

The Freedom to Negotiate Act will blunt a decades-long effort by Anti-Worker politicians and their wealthy corporate donors to deny Workers the chance to join strong Unions.

Specifically, the Act will give Public Service Workers the freedom to: Join togetherâ¯in a Union selected by a majority of Employees; Collectively bargain over wages, hours and terms and conditions of employment; Resolve disputes with their employers through an unbiased process; Useâ¯voluntary payroll deduction for Union Dues;â¯Engage in concerted activities related to collective bargaining and mutual aid;â¯Have their Union be free from requirements to hold rigged recertification elections; and File suit in court to enforce their Labor Rights.â¯â¯â¯â¯

Currently, nearly half the states don’t have laws that provide for meaningful collective bargaining in the Public Sector.

The Freedom to Negotiate Act would allow Public Service Workers across the countryâ¯to join together in a Union toâ¯winâ¯respect and fair treatmentâ¯on the job.â¯

In a joint release issued by the American Federation of Teachers (AFT), the National Education Association (NEA) and the Service Employees International Union (SEIU), AFSMCE President Saunders added: Our communities are safer, healthier and stronger when Public Service Workers have the freedom to join a Union and speak up together for their communities.  The benefits that Unions provide are broad and powerful.  We know, for example, that Union Members earn higher wages and are more likely than Non-Union Members to have employer-provided health care and other benefits, like Paid Sick and Family Leave.  Particularly for women and Workers of Color, belonging to a Union closes income and wealth gaps.  For those who work in the Public Sector, belonging to a Union means pay more in line with Private Sector counterparts.  But Unions benefit not only those who belong to them, but even those who aren’t Members.  The COVID-19 crisis made even clearer that Unions are also a crucial tool for on-the-job safety.

Finally, there’s strong support for the Freedom to Negotiate Act: 70% of Americans support the Act - and with public support for Unions at its highest since 1965 - 68% - it’s time for Congress to pass the PSFNA, the Union Representatives said.

To Directly Access This Labor News Story, Go To: www.afscme.org/blog/public-service-freedom-to-negotiate-act-introduced