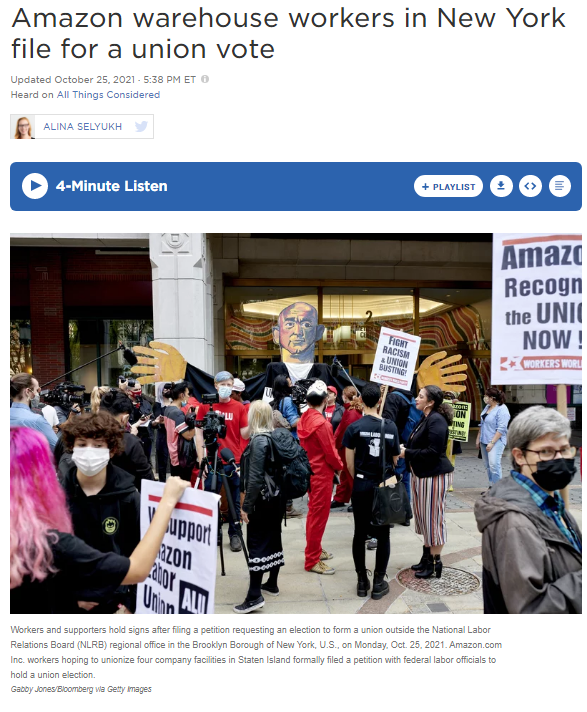 About a dozen Activists hand-carried four plastic containers filled with signed cards into a local Labor Office, petitioning it to authorize a Union Vote.

Outside, supporters chanted Pro-Union slogans against the backdrop of a giant cutout of Jeff Bezos, Amazon’s billionaire owner.

This Labor push stands out for being unaffiliated with any national Union.

It's a product of a self-organized, grassroots Worker Group called the Amazon Labor Union, financed via GoFundMe.

It is run by Chris Smalls, who led a walkout at the start of the Coronavirus Pandemic to protest working conditions and was fired the same day.

The group is now pushing to Unionize warehouses that employ an estimated 7,000 people and that pack and ship products for the massive New York market.

They hope to help Workers win longer breaks, better medical and other leave options, as well as higher wages.

The Staten Island campaign faces an uphill battle as Amazon has for decades successfully fought off Labor Organizing at its U.S. warehouses.

The company is now the second-largest U.S. private employer after Walmart with 950,000 full- and part-time Employees as of last month.

So far, the closest an Amazon warehouse has gotten to Unionizing was this Spring, when Workers in Alabama voted on whether to join the Retail, Wholesale and Department Store Union (RWDSU) and overwhelmingly rejected Unionizing.

Later, a Federal Labor Official found Amazon's Anti-Union campaign tainted that election and Alabama workers now await a ruling on whether they get a revote.

"Amazon's been around for twenty seven years and all these established Unions have been around, that have the expertise, the money, the resources," Smalls told NPR. "If it (Unionizing) was that simple, it would have been done already, so maybe it's something that's different that needs to be done, and not the traditional way."

Labor rules require Organizers to show support from at least 30% of the Workers they seek to Unionize.

The National Labor Relations Board (NLRB) will scrutinize eligibility of the collected signatures, among other things.

"I know I'm excited, but also exhausted, so I don't know how to feel right now," Smalls said, as he drove boxes with coveted signatures - "more valuable the money" - to the Brooklyn NRLB office earlier this week.