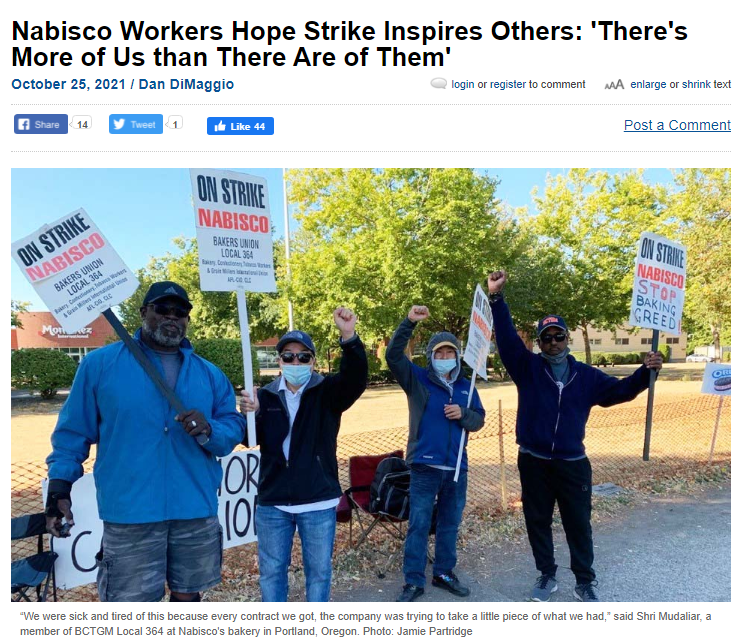 A month-long Strike by Nabisco Workers beat back the Snackmaker’s bid to introduce a two-tier Health Care Plan and switch them onto 12-hour shifts and now, Employer contributions to Workers’ 401(k) plans will be doubled.

One of the biggest issues in the Strike was the company’s effort to do away with premium pay for weekend shifts and work after eight hours.  The company wanted to put all Workers on an Alternative Work Schedule - consisting of 12-hour days, paid at straight time.

“The big issue for me is I just can’t do the twelve hours,” said April Flowers-Lewis, who’s been at the Chicago plant for 27 years. “Because the ‘twelve hours will be sixteen hours.’ And then if you do that and you’re not paying us for our time-and-a-half and double time, that’s like ($20,000) from everybody.”

Workers are currently scheduled for eight-hour shifts Monday through Friday, but they’re often forced to work on the weekends.  But they get time-and-a-half on Saturday and double-time on Sunday.

“Our kids are out of school on the weekends,” said Mike Burlingham, who works in pest control at the Portland, Oregon bakery. “Get-togethers with families, weddings, funerals - the weekend is a premium time personally.  So if the company is cutting into that personal time, the premium pay is the compensation for that.  That’s something you don’t want to lose.”

“You don’t have a lot of time with your family,” said Corey Waddy, who works in the packing department at the Richmond facility. “If I’m gonna work those hours I wanna be compensated for it financially.  You can keep the pat on the back because at the end of the day, it’s about the money.”

The agreement maintains the eight-hour shift for most Employees, but the company did win the ability to schedule new crews to work three 12-hour shifts on the weekends without paying overtime.  Current workers won’t be forced to switch to these shifts and will still be paid premiums for weekend work and overtime after eight hours.

The Strike started at the company’s bakery in Portland, Oregon on August 10.

By August 18th, it had spread to Nabisco’s two other U.S. bakeries in Richmond, Virginia and Chicago - as well as distribution centers in Aurora, Colorado and Norcross, Georgia.

Nabisco is owned by Mondelez, formerly known as Kraft.

The Strike was a long time in the making.

The company contracts some production with Non-Union Baker Hearthside Foods in the U.S.

The BCTGM lost an election to represent the 1,300 Workers at Hearthside’s McComb, Ohio bakery last December.

To Continue Reading This Labor News Report, Go To: https://labornotes.org/2021/10/nabisco-workers-hope-strike-inspires-others-theres-more-us-there-are-them