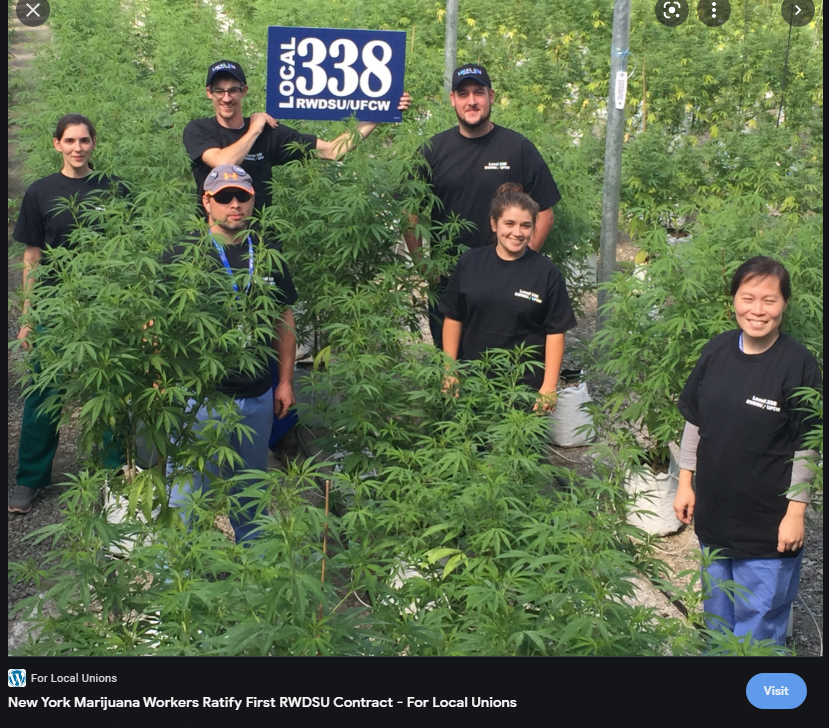 (HAMPTONBURGH, NEW YORK) - Local 338 of the Retail, Wholesale, Department Store Union (RWDSU)/United Food and Commercial Workers (UFCW) has announced Workers at PharmaCann - which operates as Verilife in New York, have ratified a new three-year Union contract.  The Bargaining Unit covers 60 Workers who are employed at the company’s cultivation and processing facility in Orange County.

“Our Members are dedicated to ensuring that New York’s medical cannabis patients are able to access safe and quality products.  They work hard for PharmaCann and proved that to the company at the negotiating table.  With strong starting salaries for new hires, wage increases for current Workers and improved benefits for Workers and their families, this contract continues to set a standard for not just careers at PharmaCann, but also what we should be creating in New York’s emerging Cannabis Industry,” RWDSU/UFCW Local 338Secretary-Treasurer Joseph Fontano said.

The PharmaCann contract was ratified by Local 338’s Members after months of negotiations.

The contract will be in effect for three years and includes critical wage and benefits enhancements, including: Annual wage increases and milestone bonuses over the term of the contract. The hourly rate of pay for Members will increase $1.25 per hour in the first year and 3.75% in the second and third year of the agreement; The Union secured language in the contract that significantly increases the minimum starting rate for all new hires; Workers will receive additional paid time off and two new paid holidays; and The company will provide Workers with an increase to their annuity benefit, as well as a new 401K Matching Program to ensure access to retirement security.

“I’ve worked for PharmaCann for over three years.  Joining Local 338 has been beneficial for myself, as well as my Co-Workers,” said Local 338 RWDSU/UFCW Member Alycesyn Siler, a Production Tech at PharmaCann. “There’s awesome perks and benefits such as ratification bonuses, zero cost to Members health care and annual raises.  While the Cannabis Industry is rapidly growing in New York, our Union has kept us growing in the company and personally.”

Local 338 RWDSU/UFCW Member Kevin Gilmartin, who’s worked at PharmaCann for two years as a Cultivation Tech, said: “I am very proud of our new contract.  We have competitive starting rates, raises for established Employees, bonuses and a more flexible PTO system with more days.  The addition of the 401k match gives us a great tool to help us invest for retirement.”

The Union will be entering into contract negotiations with PharmaCann on behalf of the Workers at the company’s four dispensaries next month.

PharmaCann is a multi-state cannabis company currently licensed to operate in seven states.

RWDSU represents 100,000 Members throughout the United States and is affiliated with the UFCW.

To Directly Access This Labor News Story, Go To: www.rwdsu.info/rwdsu_cannabis_workers_at_pharmacann_ratify_new_contract