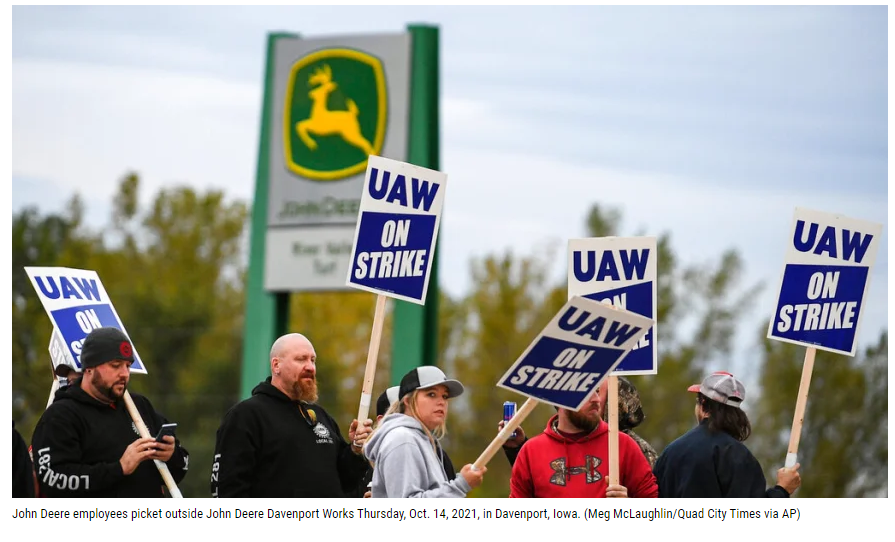 The nationwide job action is the largest in two years and has shut down production at the company.

With talks stalled between the Union and the company, John Deere’s Parent Company - Deere & Company, has gone running to the courts to limit the Union’s ability to picket the factory.

On Wednesday (October 20th), an Iowa Judge decided to agree with the company and issue a temporary injunction to limit the Union Members' ability to picket outside of the facility.

In the 11-page decision, the Judge limited picket lines to just four people at each gate of the facility.

The order barred Workers from the property until an agreement is reached and barred the Union from “unlawful mass picketing and/or parading, verbal and physical harassment, intimidation, vandalism, blocking, or impeding human and vehicular traffic to and from Davenport Works."

They are also required to name captains to watch the picket lines 24/7 throughout the strike to ensure compliance with the judge's rules.

Striking UAW Members were also barred from picketing outside of the contractor gate.

The Union has been given three days to provide the court with proof that they are following these rules.

If an individual does not follow the order, they could face a $500 fine and up to six months in jail.

Currently, the order only covers the Davenport Iowa location, but reports have stated that the company is looking to get a similar one at their other Iowa facilities.

John Deere Workers are also on Strike in Illinois, Kansas, Georgia and Colorado.

"It's divide and conquer,” said one of the John Deere Workers to Labor Notes Reporter Jonah Furman. “We are viewed as the softest target for an injunction to be successfully implemented, thus opening the door to stifling Harvester (Local 865) and Seeding (Local 434) across the river."

It appears that the push for the injunction came after a photo went viral on the Internet of Local 434 Workers blocking scabs from accessing the plant.

Workers also tell Furman that some have stopped receiving their CIPP payments - these are quarterly payments that are made based on work that was previously done before the Strike.

Furman estimates if John Deere stopped making all of these payments across the company it would result in potentially tens of millions of dollars being stolen from the Workers.

Strikers were also informed that John Deere would be cutting off their health insurance.

Both of these tactics are being used to starve the Members and inflict the largest amount of pain on them and their families so that the Union will accept a bad contract.

To Continue Reading This Labor News Report, Go To: https://ucommblog.com/section/law/judge-limits-john-deere-picketing-four-people