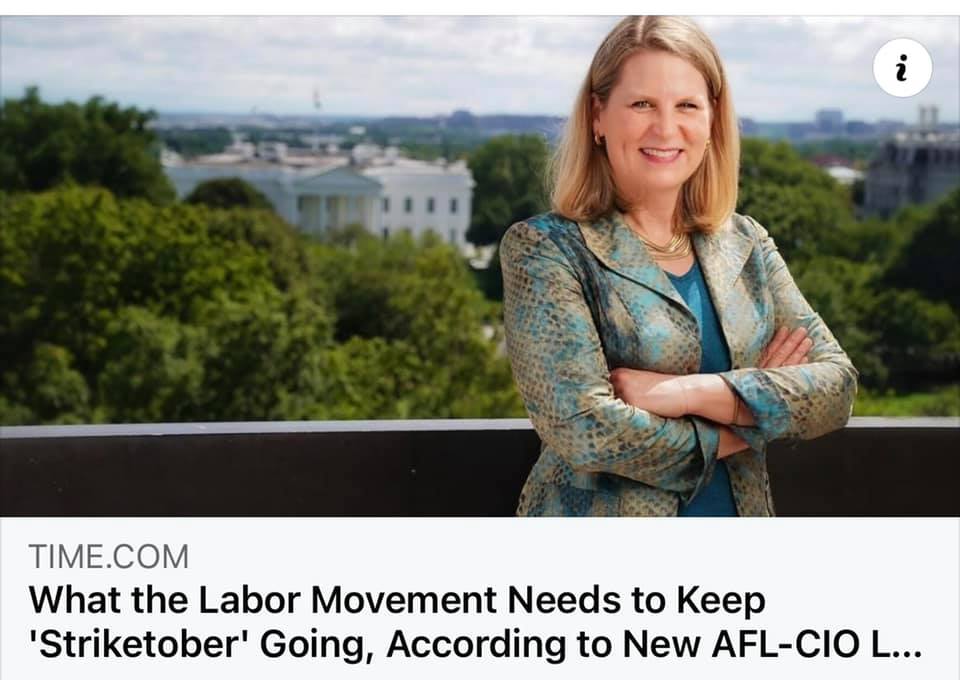 She was elected to fill the shoes of former National AFL-CIO President Richard Trumka, a beloved third-generation Coal Miner who cemented strong ties with the last two Democratic Presidents and with the Labor Federation’s roughly 12.5 million Members between 2009 and his unexpected death from a heart attack in August.

Shuler wasn’t merely taking the reins during a once-in-a-century pandemic, but also in the midst of a revolutionary inflection point, where Workers are emboldened by nationwide labor shortages to exact better wages, hours and general working conditions from their employers.

As a record-breaking 4.3 million Laborers voluntarily quit, swaths more decided not to resign for better opportunities elsewhere - but to strike for them at their current jobs.

Tens of thousands of Cameramen, Makeup Artists, Lighting Technicians and other behind-the-scenes Television Show Professionals represented by the International Alliance of Theatrical Stage Employees (IATSE) had threatened to Strike for bigger profit shares from the streaming boom and more humane hours, in an effort that could have resulted in the largest coordinated Labor action in Hollywood since World War II.

But the Union and management came to a last-minute agreement that produced what Labor Representatives described as a history-making contract.

But now, more than 10,000 United Auto Workers (UAW) Members from 14 John Deere facilities across the country have walked off their job sites after rejecting the Agricultural Behemoth’s latest contract offer.

And, over 14,000 Workers from Cereal Giant Kellogg’s have been picketing for weeks over what they call an unfair, two-tier system of benefits.

“They’ve had enough,” Shuler says of the season, which many have dubbed “Striketober.”

But as ripe as the current labor market conditions are for successful Strikes, the current moment is also a critical juncture for the future existence of the very Labor Unions that make such revolts possible.

Private Sector Union Membership has fallen from roughly 32% in 1960 to 6% today and stands to decline even more as older generations - who are more likely than younger ones to be in Unions - near retirement age.

“This is the challenge of our time.  Something like (10,000) people a day are retiring,” Shuler says, “and that ‘silver tsunami’ is about to hit us.”

Shuler spoke with TIME about what the Workers participating in this historic wave of strikes are fighting for, how Union Membership can help them get it, and what the National AFL-CIO is doing to bolster its ranks - especially with young people - to preserve its collective bargaining power in the decades to come.

To Continue Reading This Labor News Story, Go To: https://news.yahoo.com/labor-movement-needs-keep-striketober-110006618.html