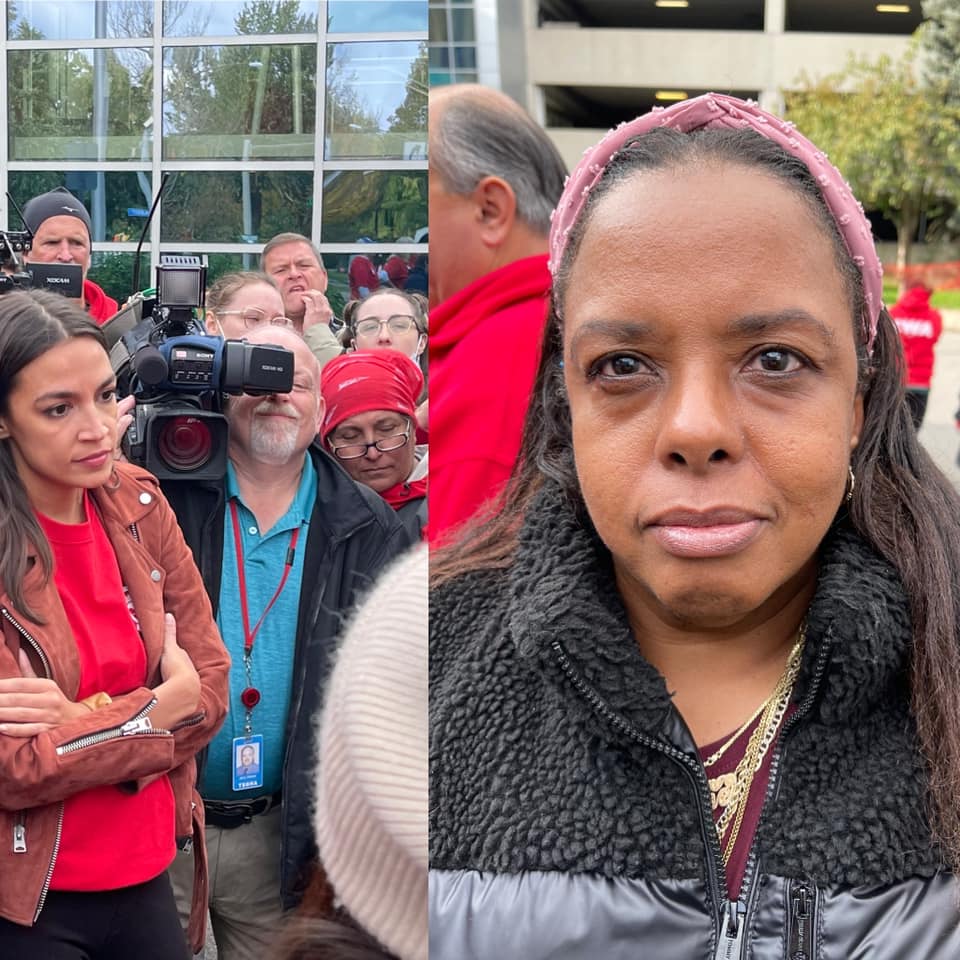 WNYLaborToday.com Editor’s Note: Pictured above, U.S. Congresswoman Alexandria Ocasio-Cortez (AOC) of New York City visited striking Mercy Hospital Workers in South Buffalo over the weekend to publicly support the Communications Workers of America (CWA)-represented Caregivers’ fight for safe staffing ratios, improved patient care and a fair contract.  During her address to the picketing CWAers, she publicly Thanked a CWA Member, Diane Peach, for her service during the Coronavirus Pandemic, which left a huge impression on the Environmental Service Technician.  (WNYLaborToday.com Photos)

(BUFFALO, NEW YORK) – For the past three-and-a-half years, Diane Peach has been employed as an Environmental Service Technician (EST) at South Buffalo Mercy Hospital where there are now nearly 2,000 striking Communications Workers of America (CWA)-represented Caregivers who are currently in their fourth week of a walkout over safe staffing ratios, improved patient care and fair wages.

Peach, a 50-year-old mother of three who has two grandchildren, was in the picket line outside the Catholic Health System-operated medical facility on Saturday (October 23rd) when U.S. Congressman Alexandria Ocasio-Cortez (AOC) of New York City showed up to voice her support for the Strikers, who are now part of a national wave of Labor Strikes led by fed-up and angry Workers of all occupations. 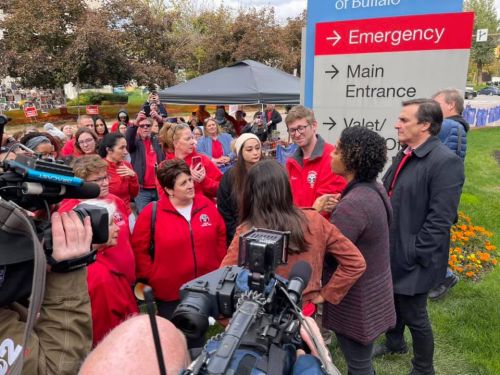 After listening to CWA Local 1168 President Cori Gambini (pictured below) provide a history of what has transpired at Mercy Hospital that brought about the work stoppage, AOC spoke to the assembled Strikers, thanking them for the work they’ve done through the Coronavirus Pandemic, before Peach was singled out. 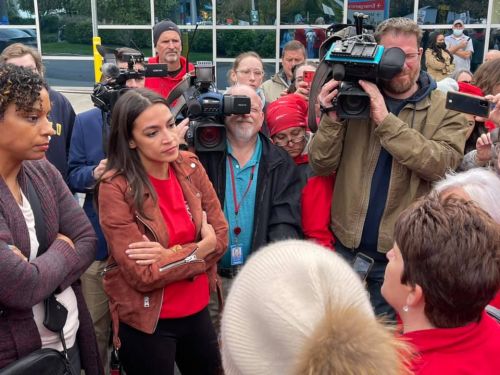 It was then that AOC took the time to personally thank Peach for the important job she performs as an EST.

Afterwards, Peach - whose low-wage job she told WNYLaborToday.com includes cleaning the Surgical Department of human “blood, guts and stitches” (Pictured Below, in the background, wiping away tears from her face as she is interviewed by WNYLaborToday.com Editor-Publisher Tom Campbell/Photo Courtesy of CWA Via Facebook) continued to wipe away tears as she tried to convey the emotions of being recognized for the job she does. 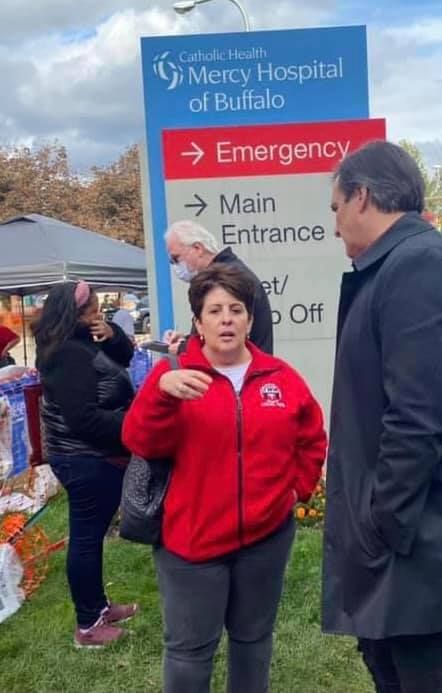 “I felt like the ‘lowest of the low.’  ‘(The recognition) was overwhelming.’  ‘(Now) I just felt like somebody sees me.’  ‘I’m not invisible,’” Peach (pictured below) told Your On-Line Labor Newspaper. 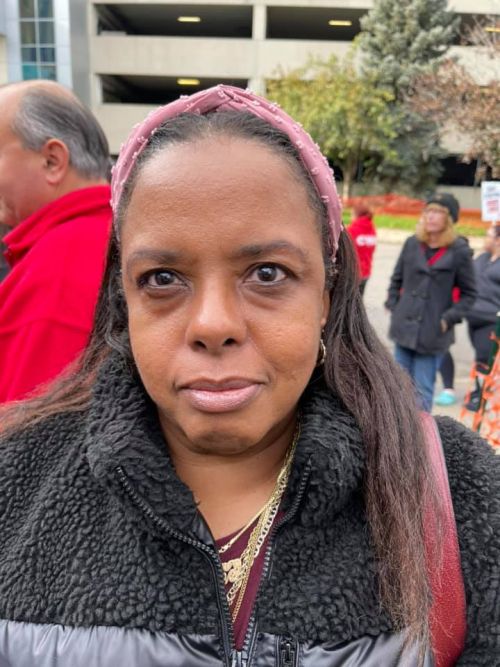 “Hopefully ‘it will help (Catholic Health) to see and up our wages so people will come and stay because we are so short staffed,’” she said, using her fingers to wipe away the tears that continued to fall from the corner of her eye.  “I ‘hope they give us what we deserve.’”

Support from AOC was the latest in an amazing series of visits from high-profile elected officials and Labor Leaders who’ve traveled to Buffalo to join with the striking CWAers, including (in the order of their appearance over the past several days) New York State Attorney General Letitia James, New York State AFL-CIO President Mario Cilento, Governor Kathy Hochul (who opted to make an unannounced and media-hushed appearance ), Public Employees Federation (PEF) President Wayne Spence and State Comptroller Tom DiNapoli, as well as Deputy and Senate Majority Leader ââMichael Gianaris. 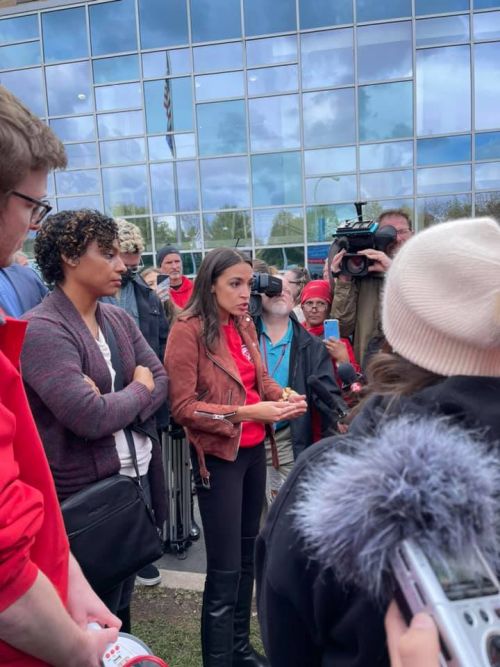 CWA Local 1168’s Gambini told AOC: “Safe staffing ‘is a problem across our Nation.’  ‘It was a very difficult and hard decision’ (to go on Strike), but when you have wages at ($10) an hour for some Workers and a CEO (Catholic Health’s Mark Sullivan) who’s making ($1.5 million) for a ‘non-profit’ hospital - ‘it’s unacceptable.’”

AOC responded: “You are ‘never only on Strike for yourself.’  ‘It’s for your patients, which is remarkable.’  ‘Your job is to care.’  ‘Thank you for that.’  You are ‘so selfless and you are bringing attention (to problems) that most people don’t know.’  That the person who cleans up the surgical room (this is when those in the crowd make reference to Diane Peach) ‘isn’t being paid a Living Wage.’  ‘It’s morally reprehensible.’  ‘I don’t want to go to a hospital that treats Workers like that.’  ‘It’s mindboggling.’  There is ‘no’ labor shortage - it’s a ‘job’ shortage.  So how do we mobilize in our work?  ‘There is power in a Union.’  ‘Thank you for making this choice to Strike.’  ‘It is not easy.’  ‘You are doing it because you care, because of poor’ staffing ratios.  ‘People’s lives are at risk.’  ‘Not enough’ Staff?  ‘Then raise wages.’  (With a hospital so understaffed) ‘to pay one person ($1 million for Catholic Health’s CEO) in Buffalo, it’s not right.’  ‘This is a misappropriation of value.’  ‘A paycheck is not a measure of your worth.’  ‘Stay strong.’” 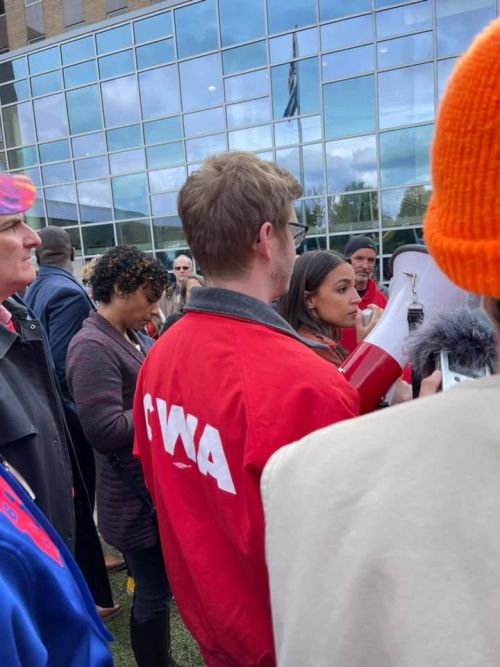 Meanwhile, and according to the CWA, bargaining occurred “all of last week,” but “on at least two occasions, Union Bargainers waited 12 hours for management to respond to their proposals.”

CWA called it an effort to keep its Sisters of Charity Hospital Union-free.

The Union also said it had learned Catholic Health is giving Employees and recruits at that hospital $20,000 sign-on bonuses.

On yet another front, the CWA took the time to set the record straight on the status of bargaining and responded to misleading claims that Catholic Health Officials have made publicly.

CWA District 1 Vice President Dennis Trainor said in a distributed statement: “I don’t know why Catholic Health keeps spreading false and callous claims about its own Employees when there is nothing we want more than to put this Strike behind us.  Our Union continues to engage in hard bargaining to achieve our Members’ key goals - guaranteed adequate levels of staffing and a fair compensation package that will enable the hospital to attract and retain Staff.  CH’s poor management of this entire situation, from the onset of COVID-19 to this Strike, has been a clown-show of miscalculation and ineptitude, failing their Front Line Staff, the community and their patients in the process.  It’s long past time for management to open its eyes, shed its self-serving preconceptions and get to work on settling this contract.  CH badly mismanaged its hospitals during COVID, leading to crushing shortages of Staff and supplies, while CH management continues to remain out of touch with the anger, fear and demoralization of its workforce caused by conditions in its hospitals.  CH refuses to believe, despite direct statements to the contrary from top CWA Leadership, that its Workers were so deeply frustrated by years of short staffing and CH’s lack of any action to solve the problem as it continued to worsen, that they were determined to Strike if management did not comprehensively address this concern before the contract’s expiration.”

CWA Area Director Deb Hayes, who has also had to deal with the passing of her elderly mother, added in a distributed statement: “Catholic Health still does not realize that this Strike has been entirely driven by the concerns and determination of its own workforce, not by CWA Union Officials, and (our) Members are determined to Strike as long as it takes to achieve a fair agreement.  It hurts when Catholic Health spreads lies about us and tries to intimidate us, after our Members have put everything on the line during the pandemic, but the truth is Catholic Health’s counter-productive statements only make us more determined to keep fighting for the care that patients deserve.”