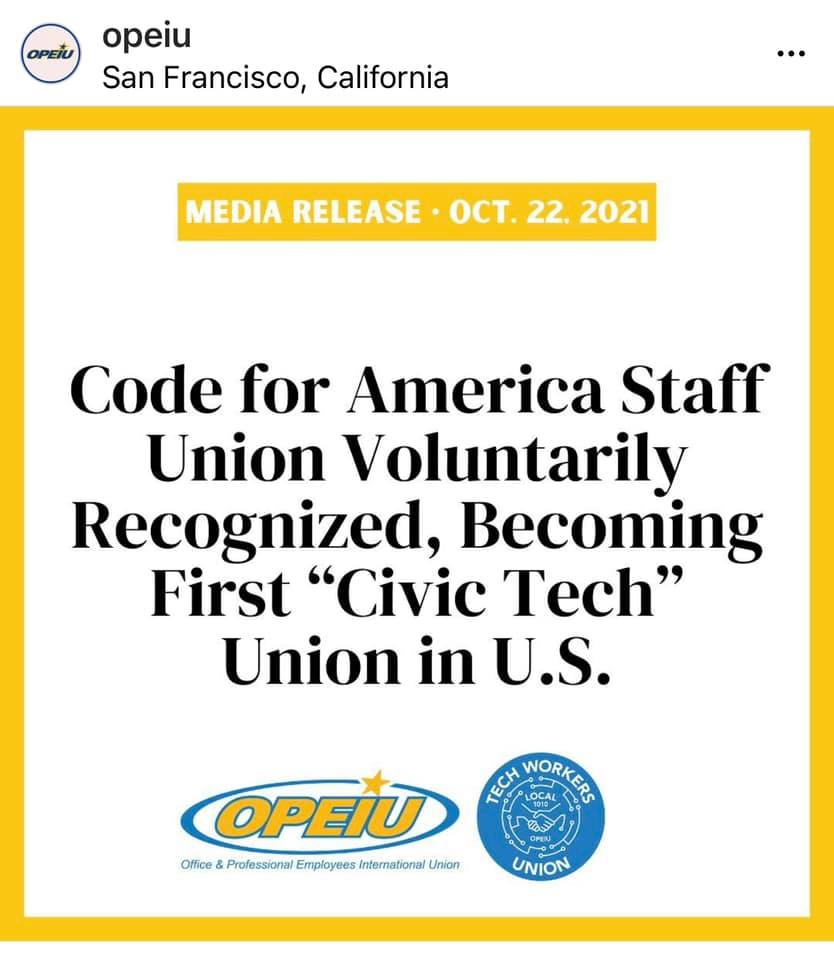 (NEW YORK CITY) - Staff at Code for America (CFA), a non-profit organization focused on closing the technology gap between the Public and Private Sectors, are the latest tech workers who have chosen to be represented by the Office and Professional Employees International Union (OPEIU) Tech Workers Union Local 1010.

Contract negotiations will begin in the coming weeks.

"Non-profit and Tech Workers alike are becoming increasingly aware of the power a Union brings them at work," OPEIU Organizing Director Brandon Nessen said. "Unionizing gives Working People agency to advance not only their own interests, but the mutual interests shared by both Staff and management."

Voluntary recognition of their Union avoids the often contentious and lengthy process of conducting an election via the National Labor Relations Board (NLRB).

Employers who insist on the procedure often do so in a way that conflicts with the stated mission, goals and values of their organizations.

"We are pleased Code for America management took the step to voluntarily recognize our Union, CFA Workers United, via a Democratic Card-Check process," said Aditi Joshi, who’s been with the organization for two and a half years. "We look forward to working together with CFA management to continue building a culture at the organization that empowers all Employees to show up to work as their full selves, each and every day."

OPEIU founded Tech Workers Union Local 1010 in January 2021 to raise standards for Workers in the Tech Industry, with a longer-term goal of providing all Tech Workers a better future in their workplaces through collective bargaining.

Beginning with its historic win at Kickstarter in 2020, and exacerbated by the COVID-19 Pandemic, momentum for Unionizing the Tech Sector has grown significantly.

"Our Union is creating a space for Tech Workers to learn from each other, coordinate together and show up in solidarity for each other," said R.V. Dougherty, a Local 1010 Tech Organizer.

"By doing so, we're building our capacity to run strong campaigns and, above all, win legally binding contracts that can help even out the imbalance of power between Tech Employees and their employers.  We are heartened by CFA management's decision to voluntarily recognize their Employees' Union and look forward to using the collective bargaining process to work together to realize and reaffirm the organization's core belief that those most impacted by policies should be involved in their design," Dougherty said.