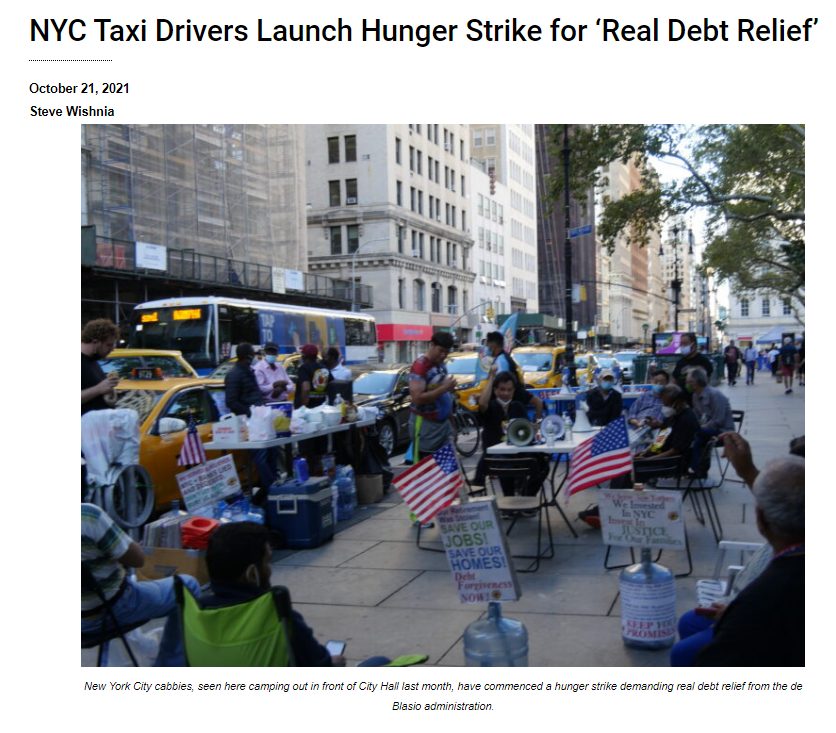 “The city is still not responding to our call for real debt relief,” New York Taxi Workers Alliance (NYTWA) Director Bhairavi Desai said before the rally announcing the Hunger Strike.

Debt relief, Assembly Member Zohran Mamdani (Democrat-Queens) told the rally, will make the difference between “merely postponing devastation and suicide and stopping it.”

Drivers chanted “We want justice…Talk to the Union.”

The Hunger Strike will not be like the Irish Republican Army one of 1981, in which 10 members of its Provisional faction starved to death in a British prison in Northern Ireland by refusing to eat for more than two months.

The Drivers and other participants will rotate, so no one damages their health.

On the other hand, Shahana Hanif, the Democratic City Council candidate in Brooklyn’s Park Slope and Kensington neighborhoods, said she was joining the Strike even though she’s in remission from Lupus, because “we have got to take this risk for Workers.”

It would give them $20,000 for down payments to lenders to restructure loan principals and set lower monthly payments, plus up to $9,000 to help with monthly payments during the first year.

As of October 16th, the mayor’s office said, the program had helped 102 Yellow Medallion Taxi Owners, reducing their average debt of about $325,000 by almost half.

The city-supported renegotiations with lenders eliminated the remaining debt for 21 who owed relatively small amounts, according to the TLC.

More than 1,000 other owners are in the pipeline, working with the Commission’s Owner/Driver Resource Center.

The TLC came up with the idea of grants for down payments last year, when, in its efforts to help Drivers survive the loss of work during the Coronavirus Pandemic, it found that having a down payment was the best leverage they had to get lenders to renegotiate, but Drivers usually had to borrow the money from family or friends.

It says it has been able to reduce some Drivers’ payments to less than $1,500 a month.

That level is still “not sustainable,” Desai says.

Richard Chow, one of the Hunger Strikers, echoes that point.

To Continue Reading This Labor News Story, Go To: www.laborpress.org/nyc-taxi-drivers-launch-hunger-strike-for-real-debt-relief/