âWe Need To Have Our Voices Heard, So We Decided To Join The Union And Fight For Our Rightsâ - Dollar General Workers âPush To Unionize Amid Hostility From Aboveâ 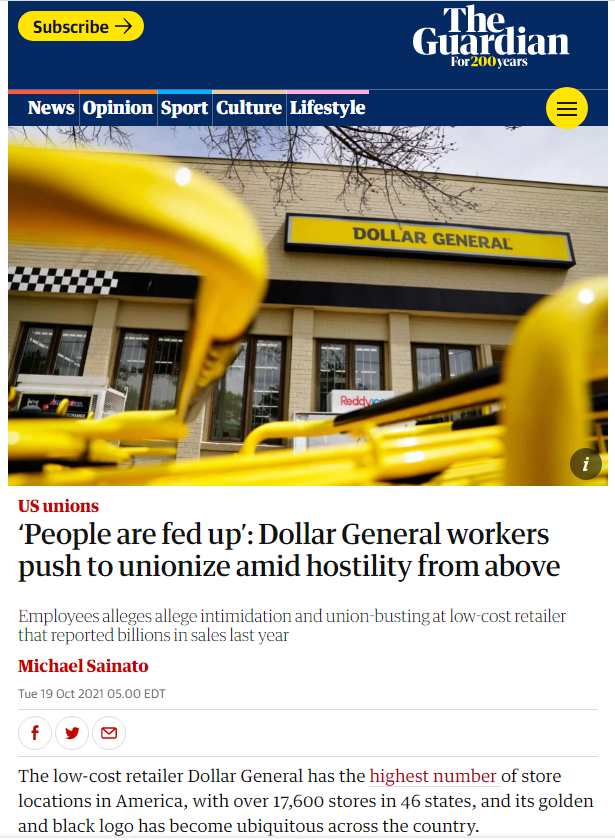 (BARKHAMSTED, CONNECTICUT) - The low-cost retailer Dollar General has the highest number of store locations in America, with over 17,600 stores in 46 states, and its golden and black logo has become ubiquitous across the country.

The company’s rapid footprint is continuing to grow, as a staggering nearly one out of every three retail stores opening in America this year is now a Dollar General.

All that business generates dizzying revenue too - the company reported $33.7 billion in sales last fiscal year.

Currently, none of the thousands of Dollar General Retail Stores are Unionized, as the company is aggressively opposed to Unions with a company philosophy of remaining “Union Free.”

Yet a handful of Workers at a Dollar General store in Barkhamsted, Connecticut are pushing to change that, with a Union Election scheduled for today (October 22nd) to join the United Food & Commercial Workers Union (UFCW).

Five Workers at the store are currently eligible to vote in the election, as a sixth Employee was abruptly fired just a day before an October 9th cut-off to be eligible.

They requested to remain anonymous for fear of risking other job prospects.

The Worker said they were covering a shift on October 8th when they were not originally scheduled.

While they were stocking refrigerated products, they were confronted by one of the corporate-level managers - who has descended on the store since the Union Election Petition was filed in late September - who criticized the company’s inventory system that often delivered products to the store they had no room to stock.

“After that I just continued with my day-to-day activities.  About an hour to two hours after my shift, I had been notified by my manager that all of his bosses had told him to terminate me,” said the Worker. “It’s no secret that I was more likely than not a ‘yes’ voter for the Union and he basically just kind of took advantage of me in a vulnerable moment.”

The Worker affirmed in the five months working at the Dollar General that he had no write-ups, was never late and was a model Employee.

The Union has filed an Unfair Labor Practice (ULP) charge with the National Labor Relations Board (NLRB) over the firing and will be challenging for his Union Election Ballot to be counted in the vote.

“I was terminated with absolutely no warning - (and) under false pretenses,” added the Worker. “People are fed up with working for the company.  They’re worth nearly ($50 billion) and our infrastructure is terrible, our corporate management is terrible.  Our store teams become more of a family than anything because we’re really all we have, so that’s why we felt like we needed to take these steps to get a Union.”

Dollar General has a record of retaliating against Employees for organizing or speaking out.