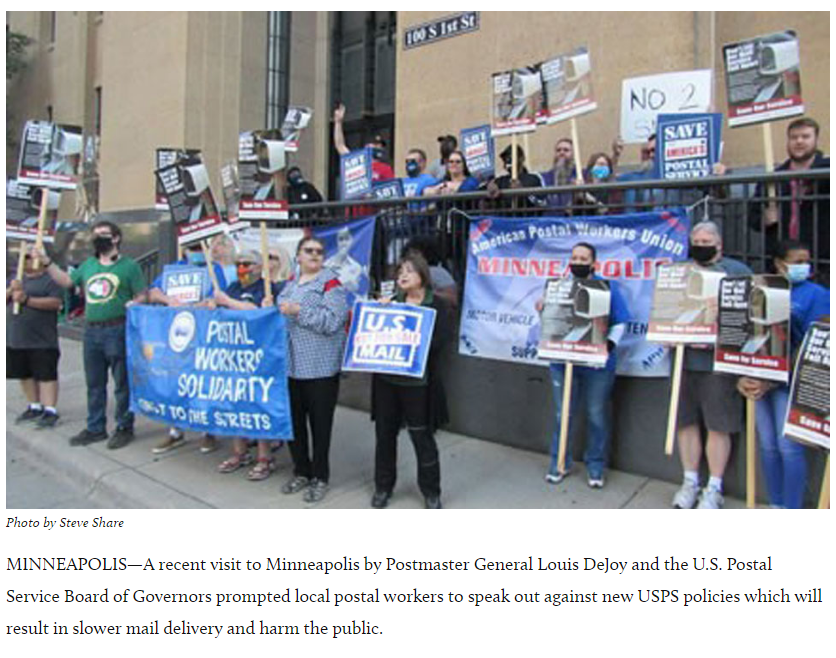 (MINNEAPOLIS, MINNESOTA) - recent visit to Minneapolis by U.S. Postmaster General Louis DeJoy and the U.S. Postal Service (USPS) Board of Governors prompted local Postal Workers to speak out publicly against new USPS policies which will result in slower mail delivery and harm to the public.

“We feel a passion and dedication for the mail,” said Peggy Whitney, Vice President of the Postal Workers’ Minneapolis area Local.

Whitney spoke to reporters outside the main Post Office in downtown Minneapolis in early October, joined by about 30 American Postal Workers Union (APWU) Members who marched in a picket line.

At issue: The move by DeJoy, a former corporate executive and GOP big giver, to implement new service delivery standards, which started on October 1st.

The new standards will result in a slowdown of mail delivery nationwide, but particularly in rural areas.

The new service delivery standard for first class mail, for example, increased from three to five days, an increase of one to two days from the previous standard.

The new delivery standards also will impact packages and periodical mail, including magazines and newspapers.

The slowdown in delivery standards coincided with an increase in postage rates.

Charging more and providing worse service runs contrary to most business practices, Whitney observed - a point members of Congress have made to DeJoy, too.

But it’s fallen on deaf ears, both his and the board’s, whose majority has refused to stop DeJoy’s delays.

And, Whitney added: “The financial rationale is miniscule compared to the potential damage to customers.”

“We’re really worried about the (delivery of) prescription medicines,” she said. “So many prescriptions are delivered by mail.”

As a result, a group of 20 State Attorneys General submitted a formal complaint earlier this month, asking the PRC to insist on undertaking a full review of the plan.

To Continue Reading This Labor News Report, Go To: https://peoplesworld.org/article/dejoys-minneapolis-visit-prompts-postal-workers-to-protest-his-plans/