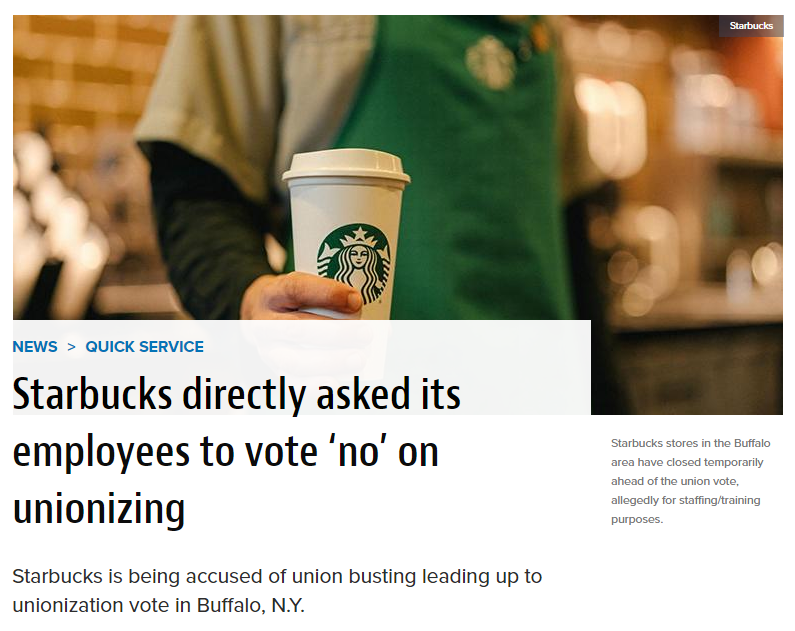 (BUFFALO, NEW YORK) - As Buffalo and Hamburg, New York-area Starbucks Employees edge closer to voting on what would be the company's first Union in the United States, the coffee chain is being accused of Union-Busting by the Union Organization Group, SBWorkers United.

SBWorkers United has tweeted out a letter that was originally sent to Starbucks Employees by Rossann Williams, President of Starbucks North America, that highly encouraged Employees to vote no on Unionizing: “Unfortunately, what I’ve seen and heard in the market shows we have partners who don’t feel the partnership we pride ourselves on having, which is heartbreaking to me.  The operational challenges like staffing, training, callouts or repairing equipment can only be solved by us, from within Starbucks.  So, we are asking partners to vote no to a Union - not because we’re opposed to Unions, but because we believe we will best enhance our partnership and advance the operational changes together in a direct partnership.”

Employees at all 8,000 company-owned stores have never been formally Unionized in the long-term and previous attempts to organize have often resulted in illegal terminations and subsequent lawsuits.

Originally, five Starbucks locations in the Buffalo/Hamburg area filed for petition to Unionize with the National Labor Relations Board (NLRB).

Since then, two out of the five stores that originally were interested in Unionizing have dropped out of the vote, according to Vice News.

Starbucks said in the subsequent hearings that they believe all Starbucks Workers in the Buffalo region should vote on unionization, regardless of if they were part of the original organization efforts.

A date for the Union vote has not yet been set by the NLRB.

Two of the stores involved in the Union vote have recently and temporarily closed, one for a remodel and one for hiring new Workers, Vice News reported on October 13th.

Although these types of closures are not unusual for major chains, SBWorkers United say these are one of the most common tactics corporations take when trying to clamp down on Union Organizing activities.

Starbucks has also hired Anti-Union Law Firm Littler Mendelsohn to represent them during these proceedings.

Starbucks Baristas at the affected stores have reported new out-of-state managers flocking to their stores, as well as visits from executives, including Rossann Williams, The New York Times reported.

In response to concerns of added staffing and temporary closures, and comparisons to Union-Busting, Starbucks has said that the company’s purpose for these activities is simply to address staffing and training challenges.

To Continue Reading This Labor News Story, Go To: www.nrn.com/quick-service/starbucks-directly-asked-its-employees-vote-no-unionizing?fbclid=IwAR2_7lW6xgF4IVKnrN-rvJzFPgm0JMfU65cG-ucVRIK0RqjgIT-TajP4_hY