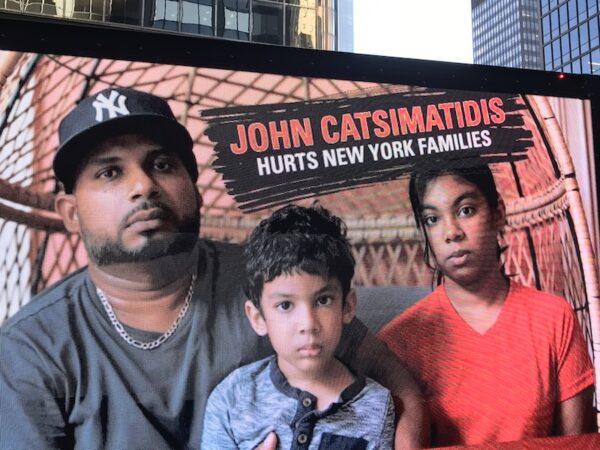 (NEW YORK CITY) - Workers on Strike at the United Metro Energy Corporation Fuel Terminal in Brooklyn marked the six-month anniversary of their walkout on Thursday (October 19th), with a rally outside the Midtown offices of billionaire owner John Catsimatidis.

“There’s a reason for this,” Teamsters Local 553 Secretary-Treasurer Demos Demopoulos told the roughly 50 supporters there. “The man can afford it.  We’re talking about paying fourteen people the same wages and benefits as the rest of the industry.”

The 14 Workers walked out on April 19th after more than two years trying to win their first Union contract.

The main issues are pay, benefits, and rights on the job, Union Activist André Soleyn told LaborPress before the rally.

For example, Soleyn gets $26 an hour, while Workers at other fuel companies in New York City get $36 for the same job.

Their current medical coverage, Soleyn says, has high co-payments and such a narrow network of doctors and hospitals that “you have to do a big exhaustive search to find anybody that accepts it.”

The Workers also want a real pension, while Catsimatidis is offering a 401(k) plan, says Demopoulos.

Finally, they can be fired - at will.

“You’re on edge - you are wondering will your number be next,” Soleyn said.

Eight of the 14 Strikers have been terminated, with Soleyn the first one, on April 19th.

A Terminal Operator, he ran the machinery that transfers diesel fuel, heating oil and gasoline from ships to storage tanks to trucks, while also keeping track of inventory and the trucks arriving.

Soleyn says a company lawyer told Demopoulos that his being axed first was “the luck of the draw.”

He laughs when it is suggested that the reason was “pour encourager les autres” - a sardonic French phrase for an execution intended “to encourage the others.”

Local 553 filed an Unfair Labor Practice (ULP) complaint with the National Labor Relations Board (NLRB) in September, alleging that the firings were illegal retaliation against the Union supporters.

The company has 100 other Employees at the terminal, on Newtown Creek in Greenpoint, including 25 Truck Drivers who are Local 553 Members and who are not on Strike.

With a net worth of almost $4 billion, those attending the rally said there’s no reason why Catsimatidis can’t pay 14 Workers what others get for doing the same kind of work.

Another issue is whether the eight sacked Strikers will be able to get their jobs back after being told that they’d been “permanently replaced.”

Employers have the legal right to hire permanent replacements in a Strike over economic issues, but not if the NLRB rules that it was retaliation for Union activity.

To Read This Labor News Story In Its Entirety, Go To: www.laborpress.org/brooklyn-oil-terminal-strikers-a-multi-billionaire-can-afford-fair-pay/