Back In High School, "Nobody Ever Talked About Apprenticeships" - âYou Don't Need A Bachelor's Degree To Land A High-Paying Jobâ 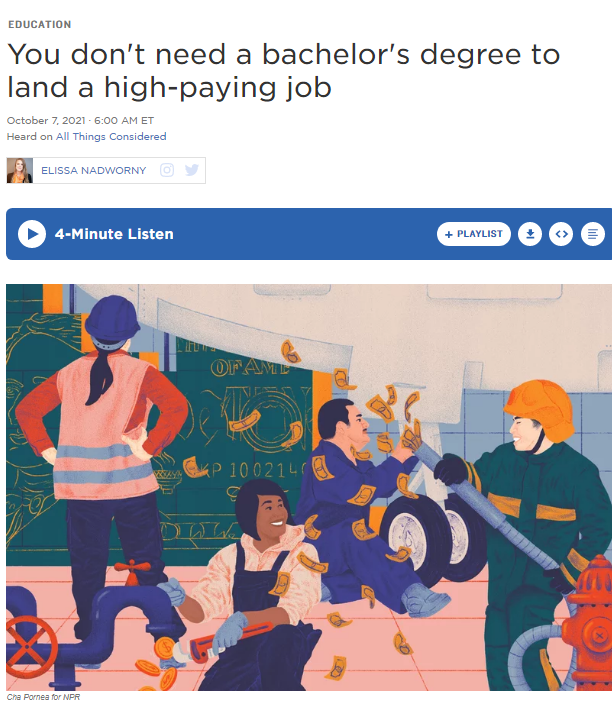 It is common knowledge at this point that the more education you have, the more money you'll make. Studies have shown that, on average, someone with a Bachelor's Degree will earn more than someone with an Associate Degree or a year-long certificate, but according to new and recently-released research, there are also a lot of exceptions.

A new study from Georgetown University's Center on Education and the Workforce finds a growing number of people without a Bachelor's Degree are now out-earning those with one.

The study found that in the years 2017 through 2019, on average, 16% of high school graduates, 23% of Workers with some college and 28% of Associate Degree holders earned more money than half of all Workers with a Bachelor's Degree.

Tony Carnevale, one of the report's authors, says these findings support the idea that "you have to go to college" isn't always the best advice for high schoolers.

"The level of education matters less," explains Carnevale, who also directs the Center on Education and the Workforce. "Where you go matters less ... which makes this whole experience and the set of decisions students have to make a lot more complicated."

The new report suggests that a student's field of study, the type of job they're training for and where they live can affect their earnings more than their type of degree.

"Your specific education has its value and the value varies enormously," Carnevale says. "That's why somebody who can do air conditioning will make more than somebody who becomes a School Teacher."

And not just air conditioning - Air Traffic Controllers, Construction Inspectors, Respiratory Therapists and cardiovascular Technicians all earn more than, or about the same, as the median Bachelor's Degree holder.

Back in high school, Isis Harris never imagined herself working as an Electrician - everyone around her was just so focused on college.

"College was the thing, the big thing, in high school," remembers Harris, 44. "The friends that I had there were going to college ... that's what the big excitement was around."

After meandering for more than a decade - taking some college classes and holding lots of different jobs - Harris signed up for a course designed to let her sample different jobs in the Construction Industry.

One of the activities involved wiring a lightbulb.

Now she's just a few months away from becoming a licensed Journeyman Electrician in Portland, Oregon.

She spends her days working on a new construction site, where her most recent task was running low voltage wire underneath a new floor to connect a thermostat.

Harris says she wishes she had found this path sooner.

Back in high school, "nobody ever talked about Apprenticeships," she says.

"I ‘think there was always a misconception about’ Trade Workers and Skilled Trades and the viability of that career and how it could actually provide the same type of lifestyle that a Bachelor's (Degree could)," she said.

To Continue Reading This Apprenticeship And Training Labor News Story, Go To: www.npr.org/2021/10/07/1043737586/college-degree-high-school-diploma-high-paying-trade-jobs