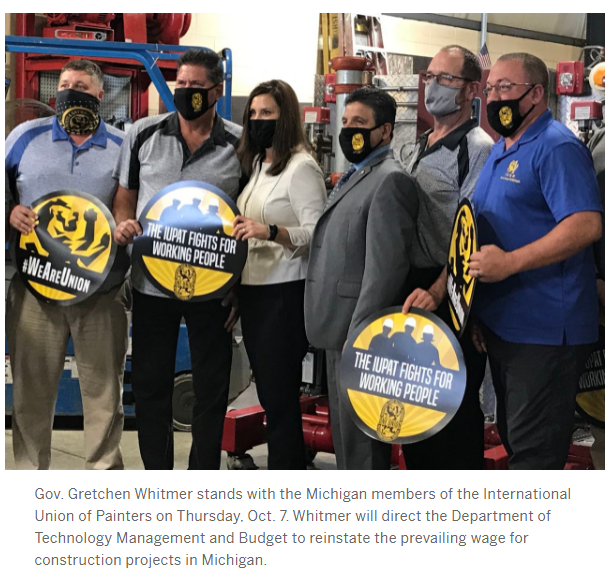 (LANSING, MICHIGAN) - Governor Gretchen Whitmer has taken action to reinstate Prevailing Wages for contractors and sub-contractors on construction projects funded by the state of Michigan.

The Governor met with Union Leaders and Union Members at the U.A. Pipefitters & Steamfitters Local 333’s Training Center in Lansing where she announced she’s signed an Executive Directive instructing the Department of Technology Management and Budget (DTMB) to require state contractors and subcontractors to pay the Prevailing Wage for construction projects in Michigan.

The DTMB Prevailing Wage Policy will only apply to projects bid out by that state agency.

“Anyone who’s doing business with the state of Michigan will have to treat Working People with dignity and respect, and that starts with paying them well,” she said. “Fair wages are absolutely foundational to building a strong Middle Class and state contracts are no exception.”

Union Leaders spoke of being undercut by out-of-state contractors and losing both jobs and state taxes.

Price Dobernick, who serves as President of the Michigan Pipe Trade Association, said a prevailing wage will help both Union and Non-Union Workers: “There’s no reason a contractor on a public project should find a competitive edge on the backs of Workers, it’s just simply not right.  Good contractors that choose to take care of their Employees should not have to compete against such unscrupulous contractors.”

Dobernick added Prevailing Wage could be a tool to recruit and retain new professionals into the Trades field: “We all hear day after day, with good reason, there’s certainly a shortage of trained, skilled Workers here in Michigan.  Prevailing Wage helps training centers like this one across the state of Michigan thrive.”

Michael Kersjes, who was attending class at the training center, is new to the field and has been training for the last six months.  He’s never worked in the industry with a Prevailing Wage, but said he thinks it will be helpful in the long run.

Kersjes and his classmates wore Gladiator-inspired Union T-shirts to meet the Governor that read: “He who sweats more in training, bleeds less in war.”

Prevailing Wage requirements were repealed by Michigan’s Legislature in June 2018 - despite the changes not having support from Republican Governor Rick Snyder.

Protect Michigan Taxpayers, a group funded largely by the Associated Builders and Contractors, circulated a petition to repeal the law that had been around for half a century.

The Associated Builders and Contractors stood firmly against Whitmer’s reversal and called it an “attempt to override State Law to enact her partisan agenda” in a statement.

The Michigan Republican Party called the announcement a power grab “to pander for votes” for her re-election campaign.

At the Union Training Center, Tom Lutz – the President of the Michigan Regional Council of Carpenters and Millwrights, told Union Members not to be swayed by political discussions.

“In a cynical way, they’ll say that this is just a higher cost to support political allies,” Lutz said. “Don’t you believe them, don’t be fooled.  Prevailing Wages are good for Michigan because it goes to Working People.  Don’t ever let them get you off that topic.”

To Continue Reading This Labor News Story, Go To: www.mlive.com/public-interest/2021/10/gov-whitmer-reinstates-prevailing-wage-for-michigan-construction-projects.html