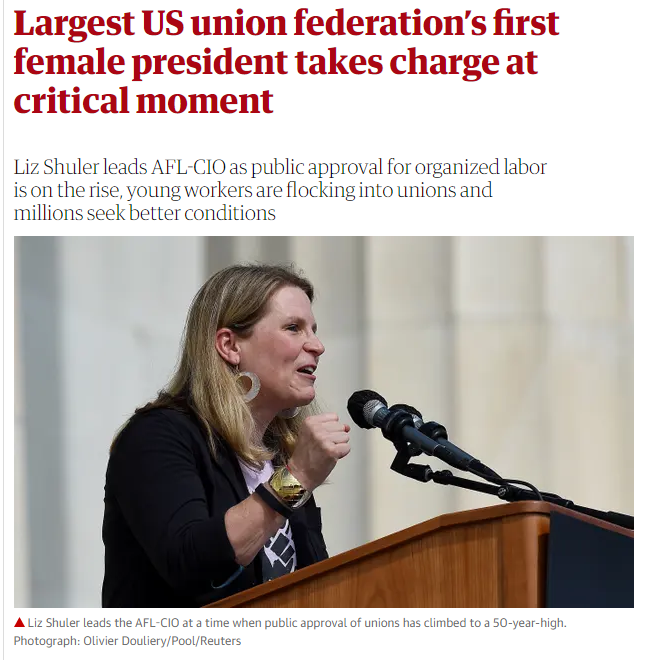 (WASHINGTON, D.C.) - For 12 years, Liz Shuler was #2 to Richard Trumka, President of the National AFL-CIO the main Union Federation in the United States, but after Trumka’s unexpected death in August, Shuler became the its first-ever Female President at a time that Organized Labor in the U.S. faces deep problems and extraordinary opportunities.

Many Union Members are hoping Shuler, a well-liked, hard-working 51-year-old, will figure out how to capitalize on those opportunities.

Public approval for Organized Labor in the U.S. has climbed to its highest level in more than 50 years, as many young Workers are flocking into Unions and millions of overstressed, underpaid Front Line Workers are impatient to improve their lot.

“The biggest challenge that Labor faces is whether we’re ready for the opportunities in front of us,” said April Sims, Secretary-Treasurer of the Washington State Labor Council, a Federation of that state’s Unions. “Union favorability is at a long-time high.  We’ve learned from COVID how much our society and economy depend on Workers.  We probably have the most ‘pro’-Labor President since FDR.  The challenge for us as a Labor Movement is, are we able to take advantage of this moment?”

At the same time, Shuler - and all of U.S. Labor - face some daunting obstacles.

A mere 6% of Private Sector Workers are in Unions, the lowest level in a century.

The Republican Party is intent on weakening Unions, and most U.S. corporations - led by behemoths Amazon and Walmart - are fiercely opposed to Unionization.

Among many Union Leaders, there is an eagerness, sometimes bordering on desperation, to reverse Labor’s decades-long decline.

“My cry for thirty years is our biggest challenge is that collective bargaining has been systematically rubbed out – Private Sector collective bargaining now covers just (6%) of Workers, having dropped from (30%),” said Larry Cohen, the former President of the Communications Workers of America (CWA), who now serves as Chair of Our Revolution, a Progressive Group spun out of Bernie Sanders’ 2016 campaign.

“I think Liz Shuler and the AFL-CIO have to be almost singularly focused on that,” he said.

There are many encouraging stories of Workers pushing to Unionize, Cohen said, pointing, for example, to Starbucks Employees in Buffalo.

Shuler will undoubtedly back these efforts, Cohen said, but he said she needs to press the Nation’s Unions to do more to support and expand organizing.

The field of battle has changed vastly for Labor, Fletcher said.

There are far more Gig Workers, Tech Workers and Immigrant Workers and corporations have grown more sophisticated in battling Unions, all while young Workers are showing more interest in Unionizing than in decades.

“That’s what Liz Shuler and other Labor Leaders have to think about,” Fletcher said. “This is a completely different Labor Movement and what does that mean for the AFL-CIO?”

To Continue Reading This Labor News Story, Go To: www.theguardian.com/us-news/2021/oct/14/liz-shuler-afl-cio-labor-movement-expansion