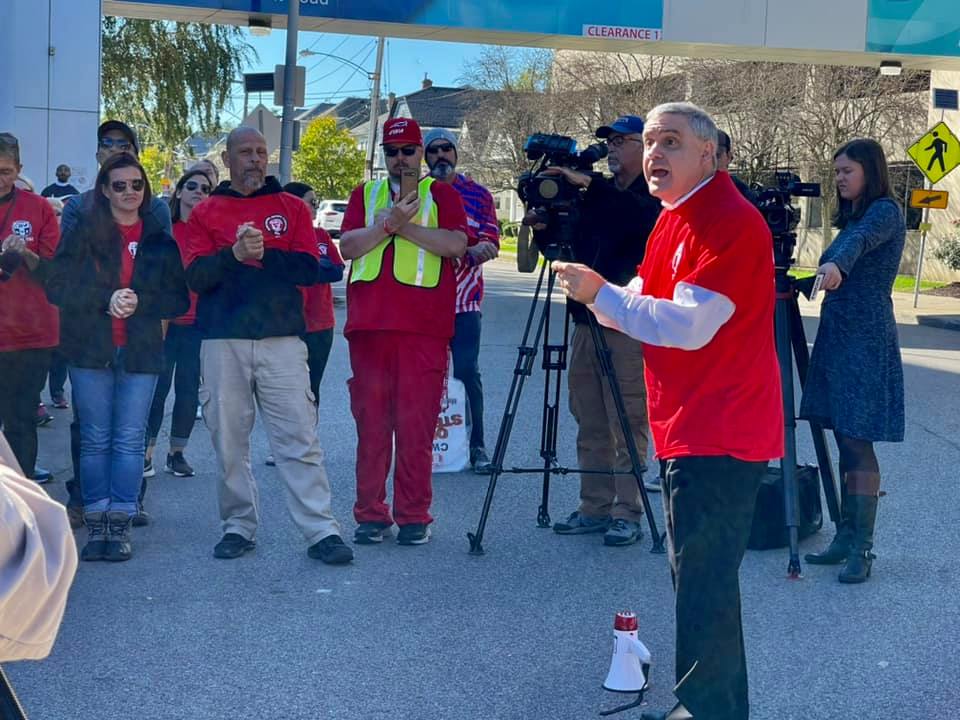 (BUFFALO, NEW YORK) – As the Communications Workers of America’s (CWA) Strike at Buffalo’s Mercy Hospital hit Day 19 on Thursday (October 19th), New York State AFL-CIO President Mario Cilento traveled to Buffalo to address the Unionized Caregivers who seek better staffing and workplace conditions, as well as fair contract, telling them that they “are not alone” and that “their fight is the fight” of the Statewide Labor Federation’s 2.5-million Members.

“I have a ‘very simple’ message for you,” said Cilento, wearing a red CWA T-shirt, as he addressed the CWA Strikers and fellow Western New York Unionists who’d come out in support of the Unionized Caregivers. “You ‘are not in this alone’.  We represent (2.5 million) Union Brothers and Sisters (across New York State) ‘and your fight is our fight - for dignity and respect, it is everybody’s fight.’” 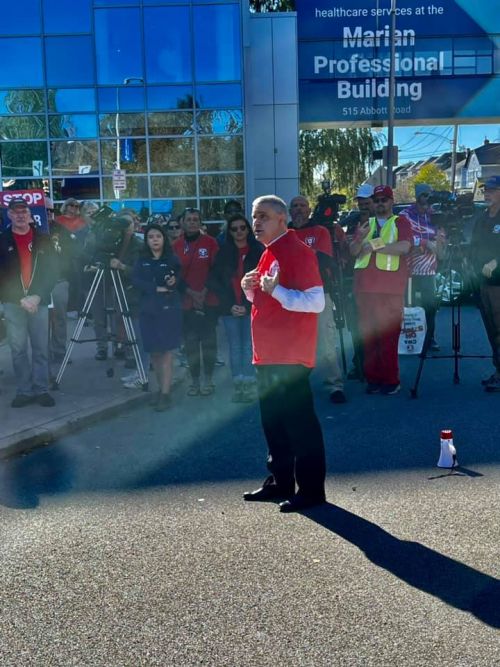 Around 1,900 CWA Local 1133-represented Caregivers are heading toward their third week on the picket line at the Catholic Health System’s South Buffalo Hospital over what they say is chronic understaffing, poor working conditions and low pay.

CWA sources told WNYLaborToday.com the two sides are talking and that the temperature at the negotiation table has gotten a bit better, but that there would be no media briefing today regarding the on-going talks. 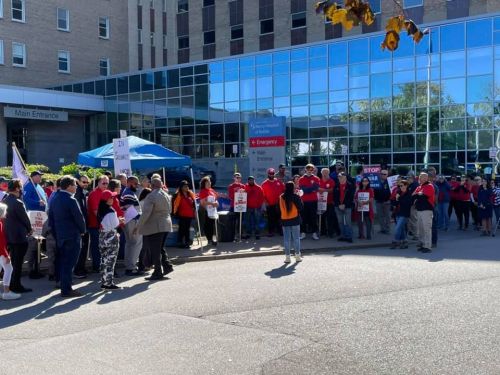 Later in the day, Local 1133 President Jackie Ettipio answered a texted inquiry from WNYLaborToday.com about the status of bargaining, but would only say the CWA Bargaining Team met today, adding Union negotiators “went over some tough areas.”

Cilento, who later walked the picket line with Western New York AFL-CIO Area Labor Federations (WNYALF) President Peter DeJesus (Pictured Below/WNYLaborToday.com Photo), told those in attendance: “You’re ‘doing this for the right’ reasons, for values and ideals - ‘that’s what it is all about.’  And, God bless you for ‘more than’ (working through the) COVID (19 Pandemic), ‘for what you did and what you do for the (Buffalo) community.’  ‘We are a family.’  ‘You don’t have to be blood related.’  ‘When one of us falls down, they have to deal with all of us.’  ‘We will win this fight - together, but only if we stand together.’” 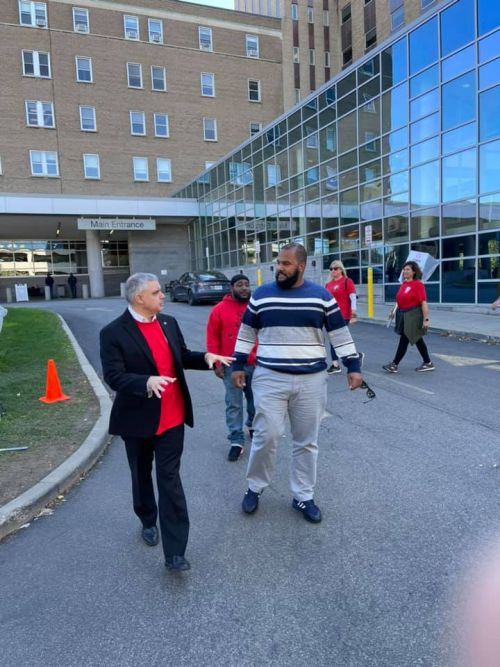 CWA Local 1133 Caregivers were joined at the event and on the picket line with representatives from a number of area Unions, including the United Auto Workers (UAW), the United Steelworkers (USW), the Civil Service Employees Association (CSEA), the New York State United Teachers (NYSUT), the International Union of Painters and Allied Trades (IUPAT), the Screen Actors Guild - American Federation of Television and Radio Artists (SAG-AFTRA), the Teamsters and the United Food & Commercial Workers (UFCW), to name a few. 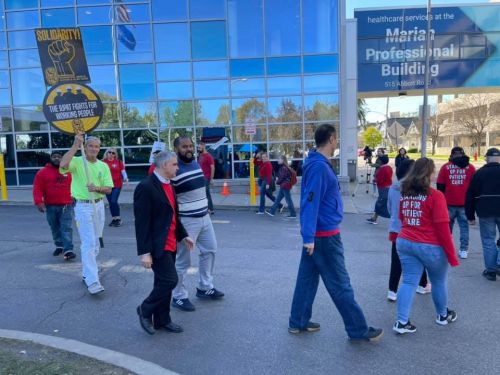 In other recent developments:

New York State Attorney General Leticia James has sent a cease and desist letter to Huffmaster, the Temporary Staffing Agency employed by Catholic Health to provide replacement Staff during the Strike, due to illegally operating in the state without proper licensing.

CWA District One Area Director Hayes issued the following response: “It is unacceptable Huffmaster, the company with which Catholic Health has contracted to provide replacement Nurses and Security at Mercy Hospital during the Strike, is knowingly operating illegally in New York State.  Huffmaster is violating the law in two ways - by acting simultaneously as an employment agency and as a security company, and because it is not registered to provide either of these services in New York.  Sadly, this is all too typical of Catholic Health’s conduct throughout this entire time period.  We applaud New York State Attorney General Tish James for taking swift action to terminate Huffmaster's role in this dispute.  And instead of wasting millions of dollars on this illegal Temporary Staffing Agency, Catholic Health should invest in its own long term Employees, by negotiating a fair agreement that provides adequate wages to attract and retain staff, and that guarantees adequate levels of care in the hospital.”

James, who traveled to Buffalo on Friday (October 15th) to walk with and address the CWA Mercy Hospital Strikers herself, later tweeted: The @CWADistrict1 Members put their lives on the line to protect our communities during this pandemic and they deserve a fair contract, period.  I’m proud to join their picket line at Mercy Hospital in Buffalo to demand real pay, real benefits and real safety.

Meanwhile, Strike Pay has now kicked in for the striking CWA Members at Mercy Hospital.

The Caregivers are now getting weekly $300 payments - weekly.

Should the Strike continue, on Day 29, those Union-represented Members on the picket line will start getting $400 payments, weekly.

More than 1,500 checks have already been dispersed, CWA Officials say.