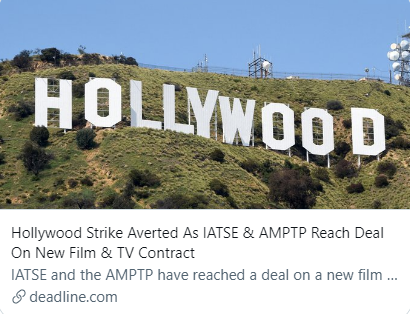 (HOLLYWOOD, CALIFORNIA) – It appears the International Alliance of Theatrical Stage Employees (IATSE) got much of what it was asking for in a deal with the Alliance of Motion Picture and Television Producers (AMPTP) that averted a nationwide Strike, including more rest between workdays, a significant investment in the health and pension plans, improved wages and working conditions on streaming shows.

“This is a ‘Hollywood ending,’” said IATSE International President Matt Loeb after news of the agreement became public.

“Our Members stood firm.  We are tough and united,” he added with a full brief coming for all Members before they vote on ratifying the deal.

“We went toe to toe with some of the richest and most powerful entertainment and tech companies in the world and we have now reached an agreement with the AMPTP that meets our Members’ needs,” Loeb said.

The leadership of IATSE Local 800 went for ever greater blunt brevity with Art Directors Guild president Nelson Coates and other top Local execs saying: “Hands down this is the strongest contract we have achieved in our history.”

In an earlier message to their members, IATSE Chief Loeb and the Leaders of the Union’s 13 Hollywood Production Locals praised the Members’ solidarity for securing a fair contract.

“Everything achieved was because you, the Members, stood up and gave us the power to change the course of these negotiations,” they said in a statement. “Our solidarity, at both the leadership and Rank-and-File level, was the primary reason that no Local was left behind and every priority was addressed.  Because of you we realized: Living wage achieved; Improved wages and working conditions for streaming; Retroactive scale wage Increases of 3% annually; Employer Funded Benefits for the term; Increased meal period penalties, including Prevailing Rate; Daily Rest Periods of 10 hours without exclusions; Weekend Rest Periods of 54 and 32 hours; Dr. Martin Luther King Jr.’s Birthday Holiday; Diversity, Equity and Inclusion Initiatives; 13th and 14th checks for pre-August 2009 Retirees; Additional MPI Hours for On-Call Employees; and Expansion of Sick Leave Benefit to the entire country.”

“Your Strike Authorization Vote, your preparation for a Strike and your willingness to risk your livelihood to fight for yourselves and each other has profoundly changed our Union,” IATSE Leaders said. “We thank you for your unwavering support.”

Members will be provided with more details about the new contract over the next few days.

After that, they’ll have to ratify it.

In the meantime, as Members and the rest of Hollywood began to catch their breath and digest the deal, IATSE exec Mike Miller offered a big picture perspective.

“Our Members will see significant improvements, but our employers also will benefit,” said the Union VP and Motion Picture Director for IATSE. “This settlement allows pre-production, production and post-production to continue without interruption.  Workers should have improved morale and be more alert.  Health and safety standards have been upgraded.”