Across The U.S., 'A More Militant Mood Among Workers Is Beginning To Make Itself Feltâ 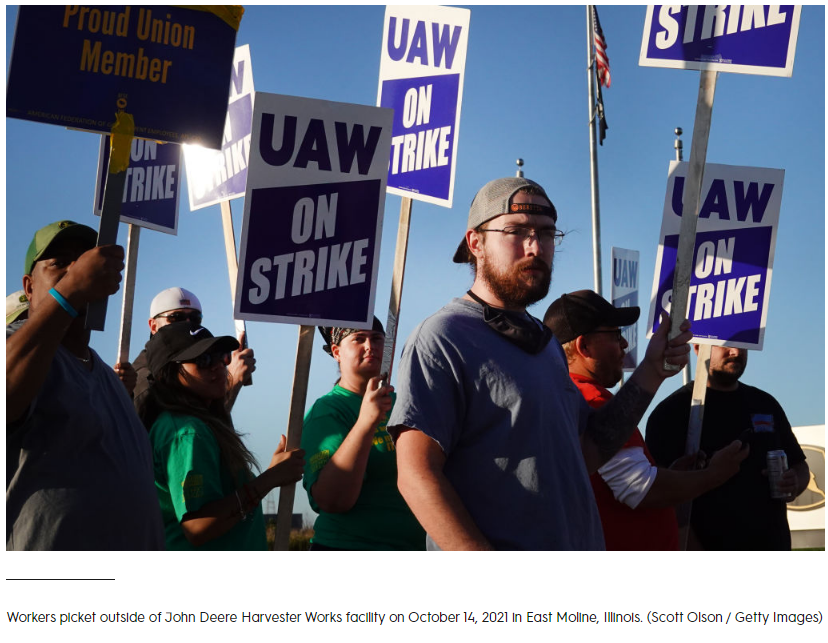 Evidence is growing of an uptick in Labor Militancy across the United States.

Ten thousand United Automobile Workers (UAW) Members at John Deere have begun their first Strike at the company since 1986, and there are several other Private Sector strikes still ongoing, including 2,000 Communications Workers of America (CWA) Nurses at a Catholic Health Hospital in Buffalo, New York, 1,400 Workers at Kellogg’s Cereal Plants across the country, 1,100 coal Miners at Warrior Met in Alabama, and 420 United Food & Commercial Workers (UFCW) Members at Heaven Hill Distillery in Kentucky.

While these actions do not add up to a strike wave, they might if we were to add two more huge — by recent standards — impending potential strikes, one by 60,000 International Alliance of Theatrical Stage Employees (IATSE) Members in the Film and Television Industry (who just secured a fair contract before their Strike deadline) and another by 2,400 Workers at Health Care Giant Kaiser Permanente.

Joining these Private Sector strikes is a restiveness among the broader Working Class, one that can be discerned in data released by the U.S. Department of Labor (DOL) last week.

The biggest takeaway from the DOL report is that people are quitting their jobs in record numbers, with some 4.3 million quits in August, about 2.9% of the country’s workforce.

Sectors with particularly high quit rates are hospitality - restaurants, bars and hotels - which saw 892,000 people quit last month, and retail, which saw 721,000 people quit (health care is another significant one, with 534,000 quits).

These, too, are seeing the highest “switch” rates - Workers moving to a different sector.

This should come as no surprise - these are sectors where Workers are at higher risk of COVID-19, raising the stakes of remaining at the job.

The numbers reflect what some have called the “Great Resignation,” a trend among Workers across the country who are responding to their increased bargaining power as labor demand outstrips supply, as well a reevaluation of priorities brought on by the traumatic event we have all been living through, by jumping ship in search of a better deal.

Indeed, a Gallup Poll from July of this year found that at the time, 48% of the workforce was “actively job searching or watching for opportunities.”

Strikes in a range of industries across the Private Sector - where only 6.3% of Workers are Unionized, compared to 34.8% of Public Sector Workers - and the record number of quits by individual Workers are two expressions of a shared situation.

As to the unusually low Strike numbers in the Public Sector, part of the story may be about Unions taking contract extensions to get them through the Coronavirus Pandemic, as well as the focus of their activity being on bargaining over safely returning to work, as has been the case with the Chicago Teachers’ Union, to name one example.

If you have a union, you fight for more.

While it’s true that some Union Workers have left their jobs, too, and that there has been a lot of organizing among Non-Union Workers who are willing to stick it out and fight - see, to name but one high-profile example, Amazon Worker organizing - the broad story remains.

A Union is a means by which to improve one’s wages and benefits, one’s hours, one’s working conditions.

So, if you’re one of the many more Workers without a union - you’re on your own.

You can ask the boss for a raise, for a better schedule, but if he won’t part with his profits, your only option is to leave in search of a better deal.

To Continue Reading This Labor News Report, Go To: www.jacobinmag.com/2021/10/american-workers-labor-militancy-covid-19-strike-unions