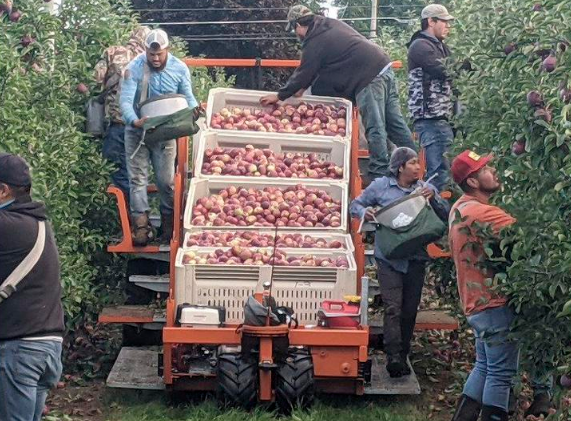 (APPLETON & ALBANY, NEW YORK) - As the 2021 picking season draws to a close for Niagara County Fruit Grower Jim Bittner, he’s worried his payroll costs could soar if a little known state panel decides to mandate that Farmers pay their Workers overtime for all time worked in a week in excess of 40 hours

The current weekly overtime threshold for Agricultural Workers in New York is 60 hours, which was put in place two years ago.  Before then, New York Farm Workers did not qualify for overtime, as Employees in other industries do after working 40 hours.

Bittner said if the three-member New York State Farm Laborers Wage Board drops the overtime threshold to 40 hours or even 50 hours per week, the effort to put more pay in the pockets of Farm Workers could boomerang, leaving those Employees with fewer hours of work and a reduction in earnings.

"We would limit the number of hours we give to where the threshold is set," said the operator of Bittner-Singer Orchards in Appleton, noting his farm is in no position to absorb an increase in payroll costs.

"We are just not going to pay overtime," he said.

The New York Farm Bureau and numerous lawmakers representing Upstate Districts dotted with farm fields are bracing for hearings on the issue.

They must be held by December 15th, though they have yet to be scheduled by state Labor Commissioner Rebecca Reardon.

They are expected to get an earful from both farmers and groups advocating for the rights of Farm Workers.

New York is one of just six states that provide Farm Workers with overtime coverage.

California is slated to move to a 40-hour threshold in the coming year.

The other states where Farmers qualify for overtime are Minnesota, Hawaii, Maryland and Washington.

Labor Groups and Immigrant Advocates note state overtime exemptions for Farm Workers are an outgrowth of the Fair Labor Standards Act in 1938.

They contend the exclusions were hatched in the Jim Crow Era of racist laws and policies and would not have continued if the majority of Farm Workers were not Hispanic as they are now, but Caucasian.

To Continue Reading This Labor News Report, Go To: www.lockportjournal.com/news/local_news/farmers-say-overtime-mandate-would-weaken-ny-agriculture/article_c9f16cba-329c-5205-b138-31cfe3ad2bd7.html