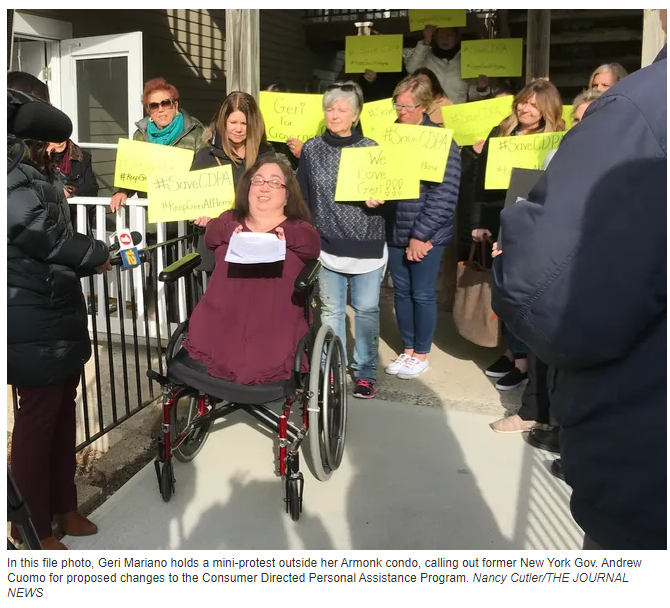 (YONKERS, NEW YORK) - A state Bill to raise wages for Home Care Workers in New York has hit a regulatory snag as lawmakers push to help a fast-growing industry composed predominantly by Immigrant Women of Color who are among the lowest paid Workers.

State Legislators, advocates, Workers and patients from Rockland and Westchester Counties are urging passage of the Fair Pay for Home Care Act, which would increase state funding for salaries of Home Care Workers who take care of seniors and people with disabilities.

The Bill, advocates say, would also allow more patients to live in their communities, not in facilities away from family or friends.

During the Coronavirus Pandemic, nursing homes and other group settings became hotbeds for COVID-19.

“Because I don’t want to die alone in a nursing home, I do what I must to stay safely at my home, in my community,” said Geri Mariano, 53, a Disabilities Advocate from Armonk who has dwarfism.

She was joined by her aide, Ana.

“Aren’t the (Personal Assistants) worth more for providing invaluable health care?,” she asked.

In New York, Home Care Workers earn about $22,000 annually, one of the lowest salaries by occupation, according to a March report from the City University of New York funded by the Association of Aging in New York.

There are about 470,000 Home Care Workers in the state, the Department of Labor reported.

Most of these Workers depend on public benefits for their own families.

About 90% are Women and most are People of Color and Immigrants.

With an aging population, there is growing demand for Home Care Workers.

But New York will face an estimated shortage of 80,000 Workers by 2025, according to Mercer, a Consulting Firm.

“Unfortunately, if we continue to underpay this workforce, we will not have enough Home Health Care Workers to be able to meet that caregiving gap,” she told The Journal News/lohud. “Right now, we’re in the midst of a caregiving shortage crisis.”

The State Bill would establish a base pay for Home Care Workers of at least 150% of the Regional Minimum Wage, which is currently $15 in New York City, $14 in Long Island and Westchester County, and $12.50 elsewhere.

It would also pull dollars from Federal spending to states for Medicaid programs.

The Bill's cost is unclear.

To Continue Reading This Labor News Report, Go To: www.lohud.com/story/news/2021/10/15/new-york-bill-wages-home-care-workers-legislature-albany-disabilities/8455153002/