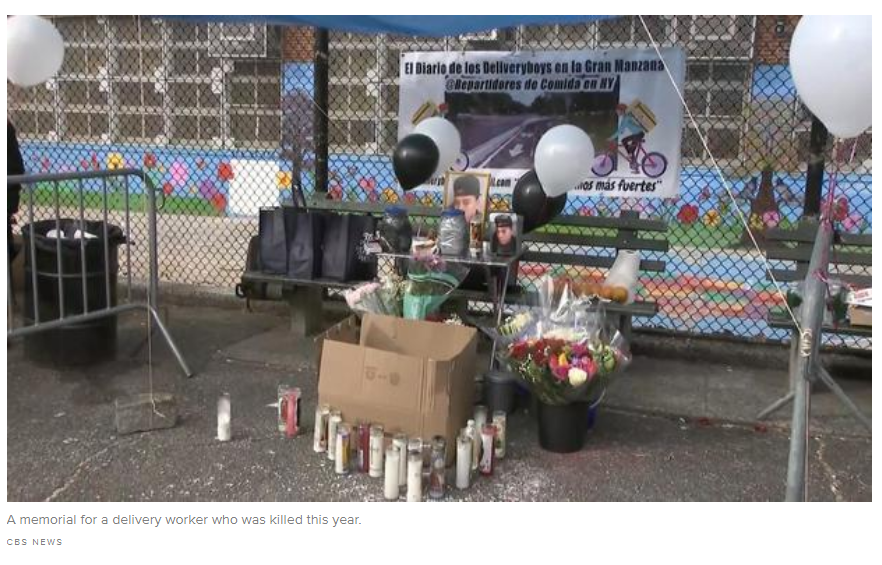 (NEW YORK CITY) - In the worst of the Coronavirus Pandemic, with New York City on lockdown, an army of 65,000 Delivery Workers risked their lives to keep the city fed.

But in addition to a global pandemic and hazardous weather, these Workers also faced threats to their lives - and now, one group is fighting to keep them safe.

A particularly dangerous area is a dark, isolated stretch along the Willis Avenue Bridge, which connects Manhattan and the Bronx.

That's where thieves ambushed one man, hit him in the face and made off with his $2,000 electric bike.

This sort of violent attack has happened dozens of times in recent months - and Delivery Workers Sergio Solano and Juan Tapia are out to stop it.

"We don't want to fight with anybody.  We just protect ourselves," Tapia told CBS News.

The "Delivery Boys," as they're known, patrol the area after their shifts to help other Workers cross the bridge safely.

Cheick Mohamed, a 26-year-old Immigrant from Mali, said he regularly worries about getting hurt while on the job.

Mohamed, who's been a Delivery Worker for two years, said in addition to getting hit by cars and taxis, he's also had his bike stolen.

"Every day I'm worrying that something else can happen to me on the street," he said.

In a recent survey from Cornell's School of Industrial and Labor Relations and the Workers Justice Project, 54% of New York City's Delivery Workers - many of them Immigrants - reported being robbed, and 30% said they were assaulted during the robbery.

To combat the violence, the Delivery Boys communicate in real time over Apps, sending alerts whenever someone is in trouble.

"When (thieves) see those guys all together they can't do anything," Tapia said.

Nevertheless, the men who work to keep others safe said they worry about getting hurt themselves.

"Last week we had a guy shot because they wanted to take his bike," Tapia said.

At least 10 New York City Delivery Workers have been killed on the job this year.

That prompted the Delivery Boys to start protesting and lobbying city officials.

"If there was nobody protecting this bridge like you are, what would happen?," asked CBS News.

"So you have to stay?" CBS News asked.

"We have to stay," he replied.

To Directly Access This Labor News Story, Go To: www.cbsnews.com/news/delivery-workers-band-together-in-new-york-city-to-fend-off-violent-attacks/