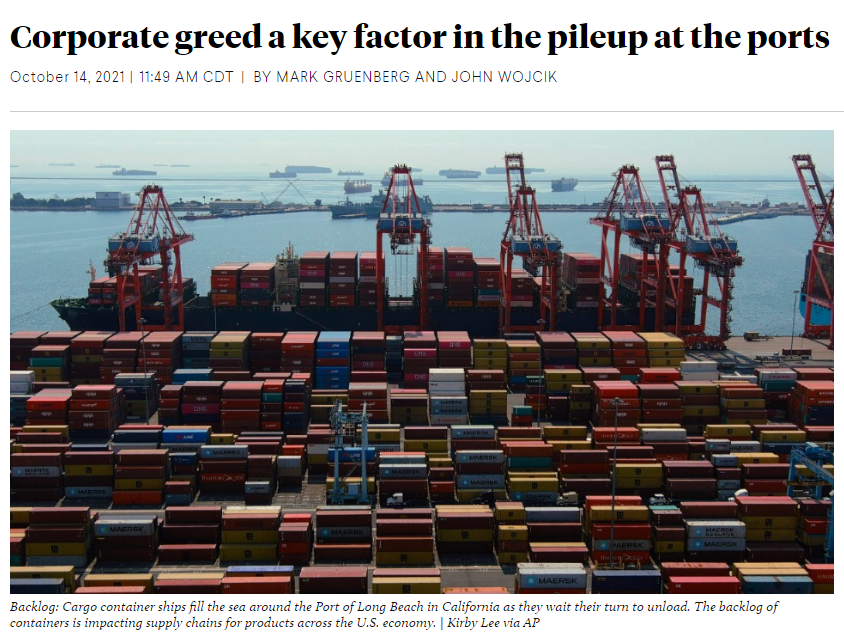 (WASHINGTON, D.C.) - Vice President Kamala Harris met in a closed-door session this week with corporate execs, Union Leaders and Transport Giants to break the bottleneck at the Los Angeles and Long Beach Ports in California, which combined - handle 40% of all containerized U.S. commerce.

While the major media have been reporting on some of the decisions made at the meeting, they left out discussion that happened concerning one of the most important reasons the Nation’s ports are now in deep trouble: Corporate greed, reflected in misclassification of Workers as “Independent Contractors,” has intensified the disaster.

A severe shortage of Port Truckers and not enough rail lines and Workers to staff them is behind the backlog affecting product supplies and prices across the country, a key Labor participant at the closed-door meeting Wednesday (October 13th), told People’s World.

National AFL-CIO Transportation Trades Department President Greg Regan said in a telephone interview that the problem goes beyond what’s been reported in the mainstream press.

Joining Harris, Regan, Teamsters President James Hoffa, the International Longshore and Warehouse Union’s (ILWU) William Adams, and U.S. Secretary of Transportation Pete Buttigieg were corporate participants, including the Presidents and/or CEOs of UPS - which the Teamsters have Unionized - FedEx, Walmart, the Chamber of Commerce, Home Depot, the National Retail Federation, and Target, among others.

Regan told People’s World Hoffa bluntly offered a solution to the problem of a lack of Truckers: “Make Port Trucker Jobs attractive by making Workers ‘Employees’ and ‘not’ Independent Contractors under Labor Law.”

Then the Drivers could organize and bargain for decent pay and for the firms to cover expenses such as gas, tires, and insurance.

The Teamsters have been trying to organize the Drivers for five years.

Hoffa told of one Port Truck Driver working for more than 40 hours a week, “and after deductions, he took home a paycheck of zero.”

“Make sure they’re properly classified with decent wages and benefits,” Hoffa added, and there’ll be more Drivers, according to Regan.

After the back-and-forth, the group reached an agreement they said was designed to both solve the Nation’s immediate shipping problems before the holiday shopping season hits and to get started on permanent fixes.

It’s those fixes - which involve ending attacks on Worker Rights to organize - that were ignored by most of the media.

To Continue Reading This Labor News Report, Go To: https://peoplesworld.org/article/corporate-greed-a-key-factor-in-the-pileup-at-the-ports/