âWe Are Coming Together To Improve Working Conditions And Secure Better Wagesâ - City Of Lawrence, Kansas Workers File Petition To âGo Unionâ With The Teamsters 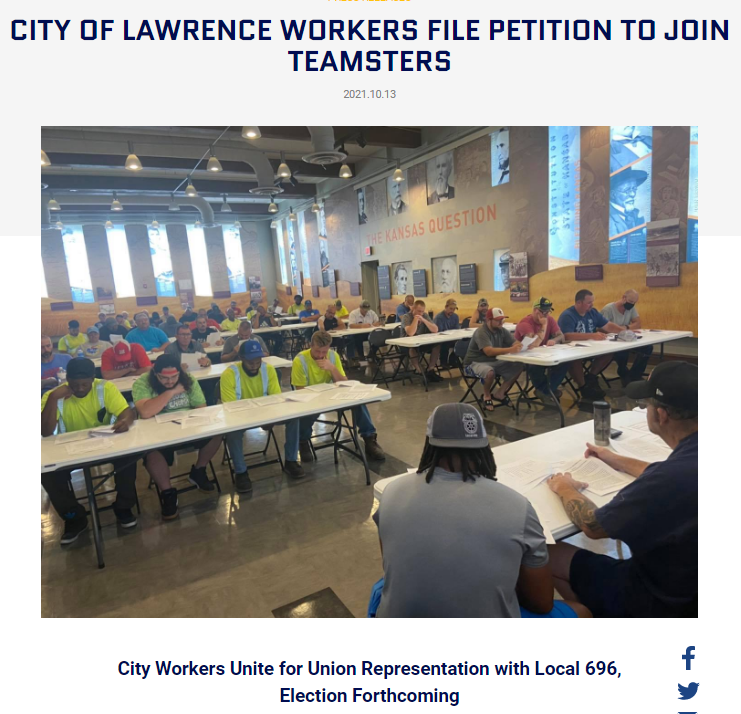 (LAWRENCE, KANSAS) – Teamsters Local 696 in Topeka announced that the Union has filed a petition with the City of Lawrence, asking that they conduct a Union Election for Workers employed by the City of Lawrence Municipal Services and Operations Department.

“We are coming together to improve working conditions and secure better wages.  We know that the Teamsters will give us the voice and strength to address the issues that matter most to us,” said Dave Osborne, a Utilities Worker for the City of Lawrence. “We are very excited about this election.  The support is overwhelming.”

The petition for a Union Election was filed with overwhelming support from Workers in all three departments.

The Lawrence City Commission is expected to set a date for the election in the coming days.

“After seeing Sanitation Workers organize with the Teamsters and win a strong contract, the decision to follow suit was a no-brainer.  I’m not doing this for me.  I’m doing this for the next generation.  We’ve had too many City Workers quit.  The turnover rate is too high and we need the Union to bring us stability and respect,” said Steve Demaranville, a Worker for the City of Lawrence Municipal Services and Operations Department.

In August 2020, Sanitation Workers employed by the City of Lawrence voted overwhelmingly, 65-to-1, to join Teamsters Local 696 in Topeka.

“This campaign is about fairness and respect,” Teamsters Local 696 President Mike Scribner said. “We will continue to stand with Workers employed by the City of Lawrence.  These Workers have seen the impact of the Union firsthand thanks to their Brothers and Sisters who work in sanitation.  We are thrilled more Workers in Lawrence are looking to join them by uniting as Teamsters.  When Workers win respect, the entire community thrives.”

Founded in 1903, the Teamsters represent 1.4 million Members throughout the United States, Canada and Puerto Rico.