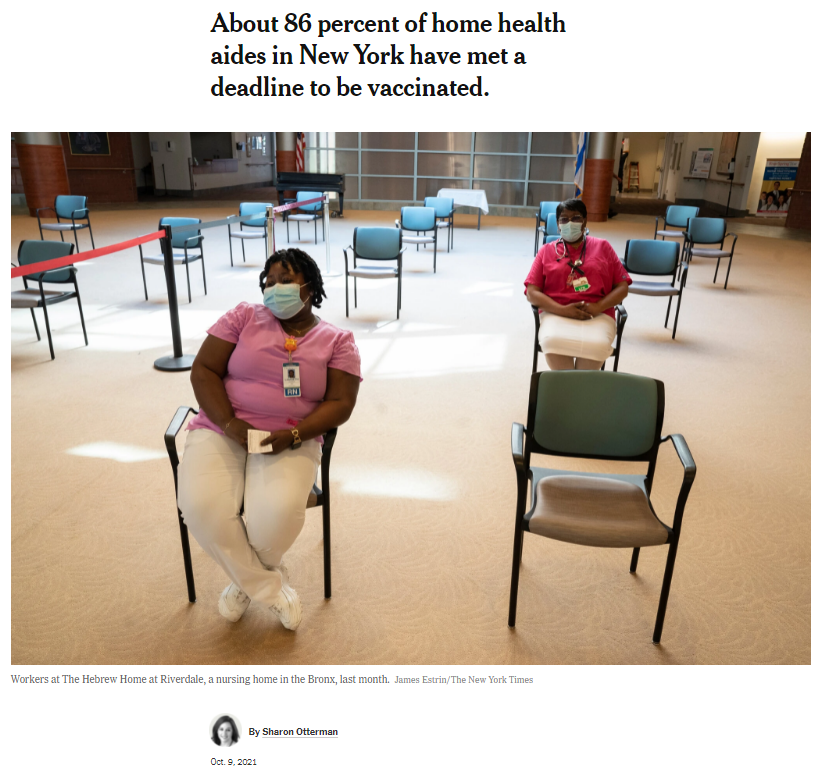 (ALBANY, NEW YORK) - The vaccination rate among Home Health Workers in New York as a deadline arrived late last week for them to get COVID-19 shots was about 86%, exceeding the expectations of some Union and industry leaders, and suggesting thousands may have made a last-minute decision to be inoculated, according to preliminary state data.

But the state’s survey of agencies providing home health care also showed that at least 34,000 Workers appeared to have missed the deadline to get vaccinated under the new state mandate, rendering them unable to work and deepening a labor shortage in the industry.

Some industry leaders had predicted that as few as 70% of Workers were likely to be vaccinated before the deadline, and the higher-than-expected rate suggested some Workers may have chosen to be immunized to save their jobs.

Faced with a similar cutoff the previous week, Hospital and Nursing Home Staff in New York accepted the shot in greater numbers than Home Health Aides, who typically make just above minimum wage.

About 92% of Hospital and Nursing Home Workers had received at least one shot when their deadline arrived on September 27th.

Though Home Health Workers have largely been out of the spotlight during the Coronavirus Pandemic, New York State has at least 250,000 of them, with some estimates rising to more than 500,000.

The deadline applied to Employees of the state’s 1,500 licensed home health agencies.

Another 30% of Home Health Aides statewide were hired directly by patients through a Medicaid Program and were not subject to the mandate.

New York had never before released data on what percentage of Home Health Aides have been vaccinated, making it impossible to draw comparisons with the new numbers, which were released late last week.

The numbers came from a Department of Health survey of all licensed home care agencies, which asked them to report their vaccination levels last week.

The U.S. Food & Drug Administration (FDA) authorized booster shots for a select group of people who received their second doses of the Pfizer-BioNTech vaccine at least six months ago.

That group includes: Pfizer recipients who are 65 or older or who live in long-term care facilities; Adults who are at high risk of severe Covid-19 because of an underlying medical condition; and Health Care Workers and others whose jobs put them at risk.

People with weakened immune systems are eligible for a third dose of either Pfizer or Moderna four weeks after the second shot.

The Home Health Care Work Force in New York has suffered from sharp shortages that have only been intensified by the pandemic, as has been the case in other states.

At the same time, demand for home care has risen as people have tried to keep their loved ones out of nursing homes, in part because of the poor conditions in homes that the pandemic exposed.

Though the loss of Workers was not as steep as feared, some industry leaders warned that losing even 5% or 10% of Aides in a field already suffering from a labor shortage could lead to the curtailment or elimination of care for thousands of patients.

The losses might also create backlogs of patients at hospitals that typically discharge patients to home care, the leaders said.

To Read This Labor News Story In Its Entirety, Go To: www.nytimes.com/2021/10/09/nyregion/covid-new-york-home-health-aides-vaccination.html