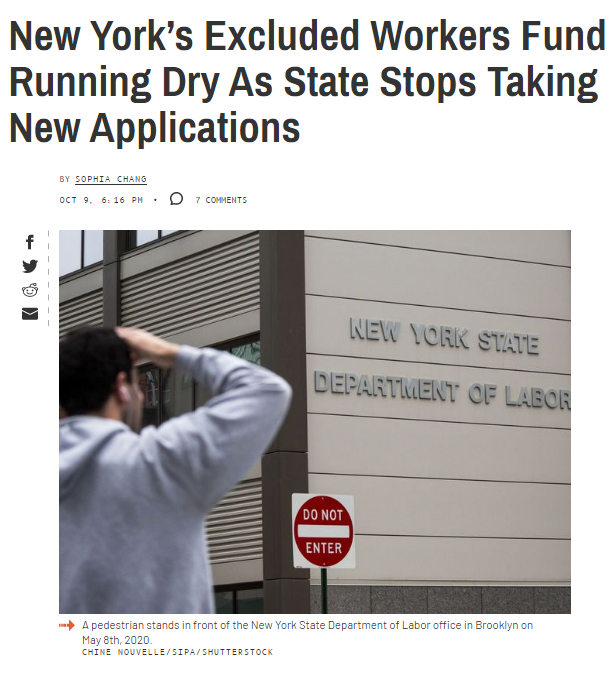 The Excluded Workers Fund, which provides help for people not eligible for other programs like unemployment or pandemic relief because of their immigration status, stopped taking new applications late last week.

The fund has already disbursed $1.2 billion in benefits to nearly 120,000 people who applied since the State Department of Labor launched the program this Summer, with more to come for pending applications.

By the end of October the fund will have paid out more than $2 billion, according to Governor Kathy Hochul’s Office.

"We must ensure that immigrant communities are supported in our recovery and I made a commitment from my first day in office to get relief to New Yorkers in need as quickly as possible," Hochul said in a press release.

Hochul had promised to expedite application approvals and payment processing in her first week in office.

The New York State Department of Labor (DOL) also worked with 75 community groups across the state on outreach about the program and education on applying to the Excluded Workers Fund - and nearly all the approved applicants were granted the maximum funding amount of $15,600, the state said.

To qualify for the fund, applicants had to show that they were a resident of New York prior to March 2020 (and continue to be) and did not qualify for unemployment or other aid; made less than $26,208 in the year before April 2021; and lost at least half of their weekly earnings between February 23rd, 2020 and April 1st, 2021 - due to the pandemic.

Advocates said the rapid exhaustion of the Excluded Workers Fund demonstrates the breadth of the need across the state.

The Fiscal Policy Institute has estimated that 290,000 Workers across the state could benefit from these funds, including 213,000 people in New York City alone.

“The fact that this fund has been depleted barely two months after it first opened is a testament to how badly New Yorkers need this lifeline,” said Bianca Guerrero of the Fund Excluded Worker Coalition in a statement. “The Hochul Administration should be commended for getting the funding out the door so quickly - but now it's time to finish the job.  Thousands of applicants are still under review and awaiting adjudication.  Not even all of the Workers who bravely went on hunger strike for twenty-three days to win this fund have had their applications approved.”

Guerrero said many eligible Workers were shut out of the program due to “Geographic hurdles and outstanding policy issues,” most notably in upstate New York where there were fewer community groups to assist with outreach and application help.”

“Workers around the state have struggled to obtain the necessary paperwork, especially with consulates facing months-long delays,” Guerrero said, adding: “We can't let Workers get left out in the cold.  Our coalition is committed to fighting for additional funding, and we look forward to working with the Governor and State Legislature to ensure full, equitable access for excluded Workers across the state."

To Continue Reading This Labor News Story, Go To: https://gothamist.com/news/new-yorks-excluded-workers-fund-running-dry-as-state-stops-taking-new-applications