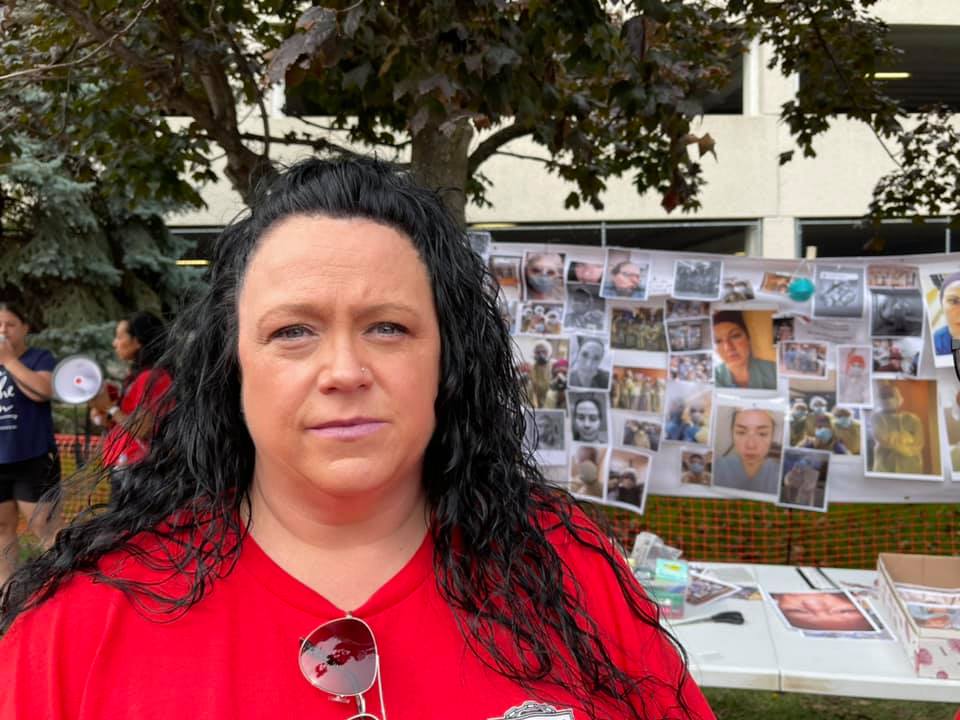 A Note From WNYLaborToday.com Editor Tom Campbell: I met Heather Lawrence (Pictured Above/WNYlaborToday.com Photo), a Registered Nurse (RN) represented by Communications Workers of America (CWA) Local 1168 and employed at the Catholic Health System’s St. Joseph’s Campus in Suburban Buffalo, over the weekend - where she was one of several Caregivers who told their personal stories of surviving the Coronavirus Pandemic while continuing to treat their patients.  Lawrence stood near a COVID Wall of Heroes that had been set up outside Catholic Health’s Mercy Hospital in South Buffalo where 1,900 CWA Local 1133-represented Caregivers are currently in their second week on Strike over chronic understaffing, poor working conditions and low pay.  The words that she took the time to read were so compelling, riveting and sad that Your On-Line Labor Newspaper asked if she would be willing to submit them for publication on WNYLaborToday.com.  She said she would and also provided several photos that we’ve used to help illustrate her and so many other Nurses’ plight.  It appears here, in its entirety:

I am an RN (Registered Nurse) at St Joe’s and I have been a loyal Employee for nearly 22 years.

I was a Telemetry Nurse there pre-COVID and I also started and spent my entire nursing career there.

Back in March of 2020 we found out that St Joe’s would be the only all-COVID designated hospital in the (Buffalo) area.

Many of us actually found out by watching the news.

It was a complete shock to most of us when we were told by (the Catholic Health) Administration that this was happening and we were given a very short amount of time to make a very important decision: To decide if we were voluntarily willing to stay at St Joe’s or be sent elsewhere.

It was no surprise that nearly all of us stayed on, knowing we were taking a risk of being exposed ourselves and possibly taking it home to our families.

St Joe's was a family and we stuck together.

I had no idea what was to be expected or what was to come, nor did any of us imagine this would become our lives for more than a year to follow.

We watched as almost immediately the hospital began to transform - walls were built, doors were blocked, areas that once served as our Emergency Department and Ambulatory Surgery Departments were turned into massive ICUs (Intensive Care Units).

The entire hospital turned into a military-like war zone. 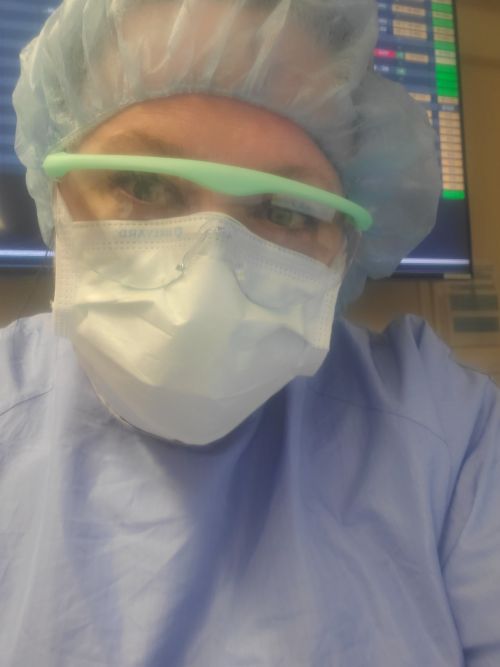 We welcomed so many incredible people who selflessly volunteered to join us from other hospitals (including those from Catholic Health’s South Buffalo Mercy and Kenmore Hospitals).

Our little St Joe’s family grew and unbroken bonds and friendships were formed.

We all came together and did incredible things.

We were proud, we were determined and we were called HEROES.

The work was not easy.

It was hot and we were under full PPE (Personal Protection Equipment) for (our) 12-plus hour shifts.

Not being able to take a sip of water or go to the bathroom until you were able to get a break and fully undress from the PPE was a lot harder than any of us had ever imagined.

We all had times where we had an itch on our noses and couldn’t touch it, when you sneezed inside your mask and couldn’t wipe it.

Our noses were running.

The sweat dripped down our backs and (our) gowns were soaked through with sweat. 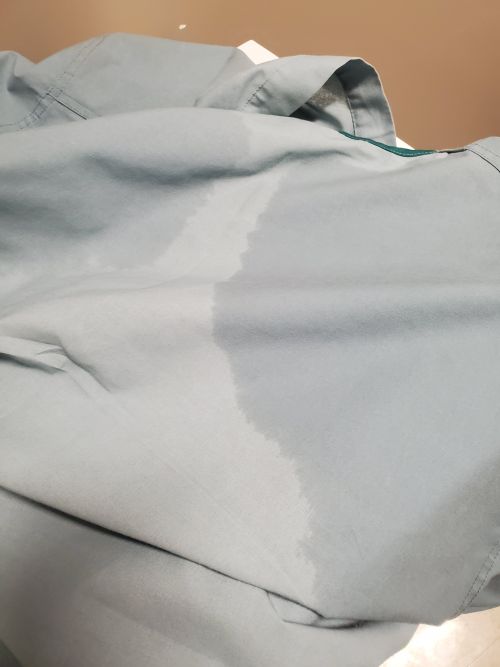 The bridge of my nose was raw from the N-95 (mask) rubbing against it. 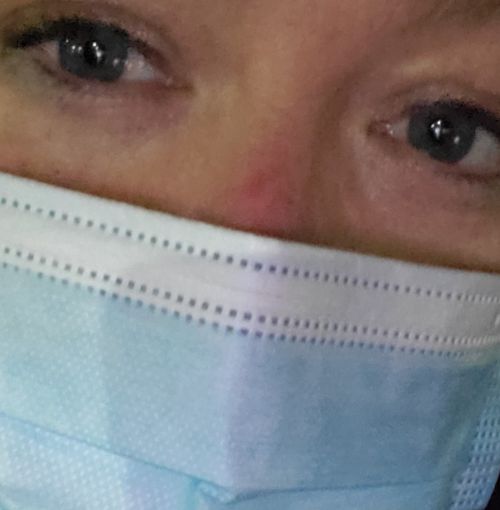 My face was burned from the chemicals they used to clean our goggles.

My hands broke out from the cheap gloves and pooled sweat. 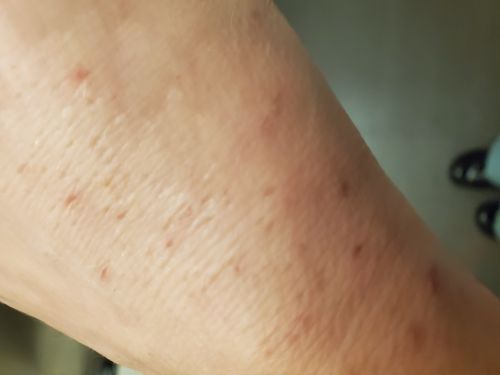 But I was a Nurse and this is what I needed to continue to do.

As time went on, the appreciation we received in the beginning of the pandemic quickly began to fade away, but the grief and heartbreak we witnessed continued to grow.

It became an everyday thing to take an iPad or phone into a patient’s room so that a family could say their final goodbye.

This never got easier.

I can’t tell you how many times I promised families that I wouldn’t let their loved one die alone.

We held the hands of so many patients as they took their last breath, knowing we were the only ones they had at that time.

Far too many times we would stay with these patients who couldn’t even see our faces or knew our names.

I cried almost every day, feeling desperate and hopeless.

Even now a year and a half later, I don’t think the grief and emotional toll has even begun to impact most of us.

As I said in the beginning, I work at St Joe’s and several months ago Catholic Health essentially closed all of our Med-Surgery Units and our ICU and turned us into an Ambulatory/Orthopedic Center.

Many of us were displaced, some disposed of.

This also came as a complete shock to us.

But I guess after the HEROES work was done, they didn’t need us anymore.

Catholic Health may have forgotten, but I will never forget what each and every one of us have sacrificed.

This has changed us.

I am not sure it was in a good way or not - but there is one thing I am sure of: I’ll never forget each and every one of you who worked alongside me.

And you will always be HEROES to me.

To my (striking) Mercy Hospital Brothers and Sisters, you had our backs then and I promise you we have your backs now. 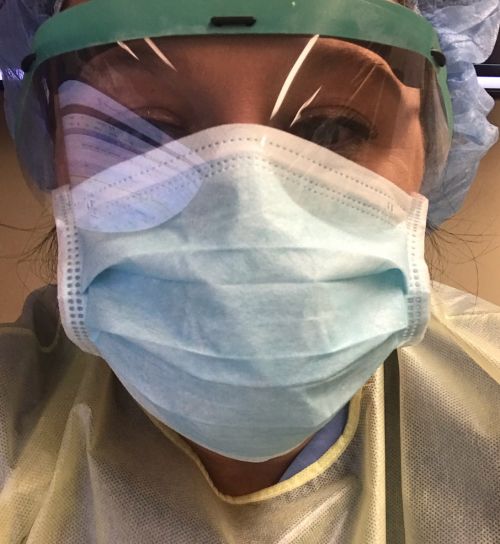 Heather: Thank You so much for sharing your amazing, compelling story. And Thank You for all the work you did working during COVID - being the lifeline for so many patients and their families. I hope you will get the mental health support needed to come out of such a traumatic experience. Stay strong and I wish you a satisfactory end to your Strike! I am a CWA Retired District 1 Staff from NYC and NJ. I came out of the first hospital bargaining unit CWA organized in NJ back in 1975. Sending a 'giant' hug. Posted by Donna Dolan on October 14, 2021 at 9:14 pm
Holding hands, holding phones and iPads as family members said their last goodbyes. Pulling beds to the windows so a family of over two dozen could sing to their mother, grandmother and great grandmother on Mother's Day. Those moments will be with me forever. Posted by Colleen Brown Nowak on October 14, 2021 at 10:09 am