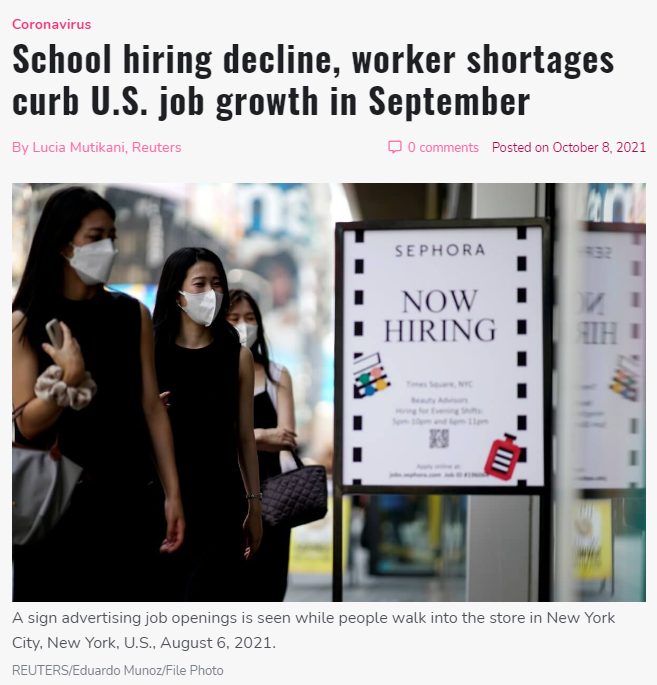 The U.S. economy created the fewest jobs in nine months in September amid a drop in hiring at schools and Worker shortages, but ebbing COVID-19 cases and the end of generous Unemployment Benefits could boost employment gains in the months ahead.

The Labor Department’s closely watched employment report showed the unemployment rate dropping to an 18-month low of 4.8%, but that was in part due to people leaving the labor force.

However, there were signs of labor market tightness.

“The biggest problem is not that growth has slowed, it is that people are still scared to go back to work,” said Brad McMillan, Chief Investment Officer for Commonwealth Financial Network.

Data for August was revised to show 366,000 jobs created instead of the previously reported 235,000 positions.

Employment is five million jobs below its peak in February 2020.

The unemployment rate of 4.8% was down four-tenths of percentage point from August, while average hourly earnings increased 0.6% from 0.4% in August.

The average work-week also lengthened by 0.2 hours to 34.8 hours.

Employment gains were restrained by a drop of 161,000 in state and local government payrolls.

Most back-to-school hiring typically occurs in September, but recruitment last month was lower than usual, resulting in a decline after stripping seasonal fluctuations from the data.

Pandemic-related staffing fluctuations in education have distorted the normal seasonal patterns, making it difficult to interpret the data, the government said.

The drop in public education jobs led to a decrease of 123,000 in government employment.

That was offset by an increase of 317,000 in private payrolls.

Employment in leisure and hospitality rose by 74,000 in September, with hiring at restaurants and bars rising 29,000.

There were also gains in professional and business services payrolls.

To Continue Reading This Labor News Story, Go To: www.amny.com/news/school-hiring-decline-worker-shortages-curb-u-s-job-growth-in-september/