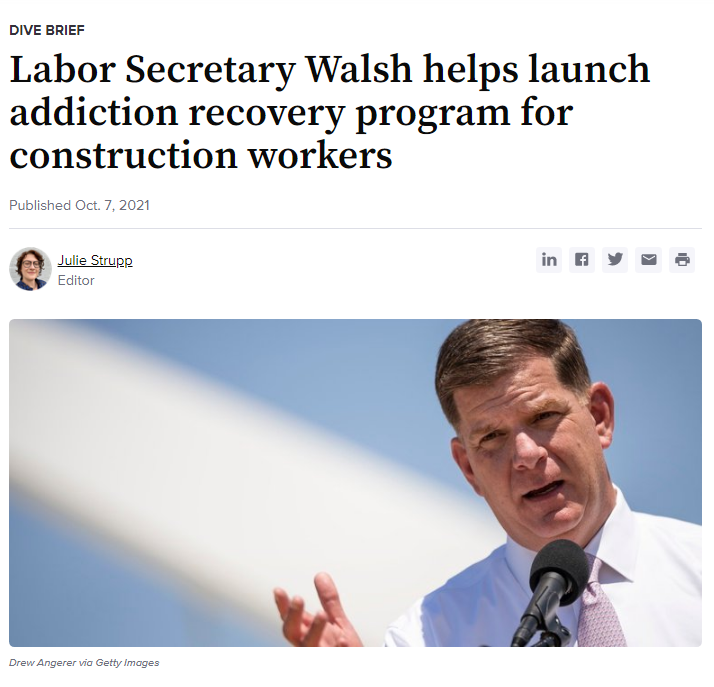 (BOSTON, MASSACHUSETTS) - Labor Secretary Marty Walsh joined the Massachusetts Building Trades Council (MBTC) to launch a new initiative to address drug and alcohol addiction among its members and their dependents.

The MBTC represents more than 75,000 Construction Workers and other Building Trade Union Members in the state.

The Massachusetts Building Trades Recovery Council coordinated the existing anti-addiction efforts that individual member Unions have established and created a new on-line portal with resources - including a calendar of recovery meetings, treatment and counseling services and 24/7 phone numbers for Members who need help.

Construction work is a physically and psychologically demanding job, and some Workers use drugs and alcohol to manage stress or self-medicate physical pain, according to the Health Care Company American Addiction Centers (AAC).

Others become addicted to opiates after taking them as prescribed for a job-related injury.

Addiction can be especially dire on jobsites since construction work requires full concentration, and anything that impairs it increases the risk of potentially deadly mistakes.

Walsh, also a former head of Laborers’ Union Local 223 and the Boston Metropolitan District Building Trades Council - as well as a former Boston mayor, has been open about his recovery from alcoholism during his time as a public figure.

Now sober for more than 20 years, he joined the new initiative to help ensure other Workers get the same support he did from his Union decades ago.

"As a former Construction Worker and someone in long-term recovery, I am grateful to my partners and friends at the Massachusetts Building Trades Council for taking their support for recovery to the next level," Walsh said in a press release shared with Construction Dive.

"This report and these new initiatives will help countless Workers get access to recovery services, reduce the stigma that prevents people from getting help, and advance our fight to end the epidemic of addiction that impacts every part of our country," he said.

Construction Industry Workers in the U.S. have nearly twice the rate of substance abuse (15%) as the general adult population (8.6%), according to the AAC.

About 12% of Construction Workers have an alcohol use disorder, compared to 7.5% nationally.

The Trades have been particularly hard-hit by the opioid epidemic.

From 2015 to 2017, Construction Workers' opioid fatality rate was seven times the average for the General Worker population in Massachusetts, according to a 2019 American Journal of Industrial Medicine study.

Almost a quarter of the state's opioid deaths among Workers during the same period were in construction.

To Continue Reading This Labor News Report, Go To: www.constructiondive.com/news/labor-secretary-walsh-helps-launch-addiction-recovery-program-for-construct/607690/