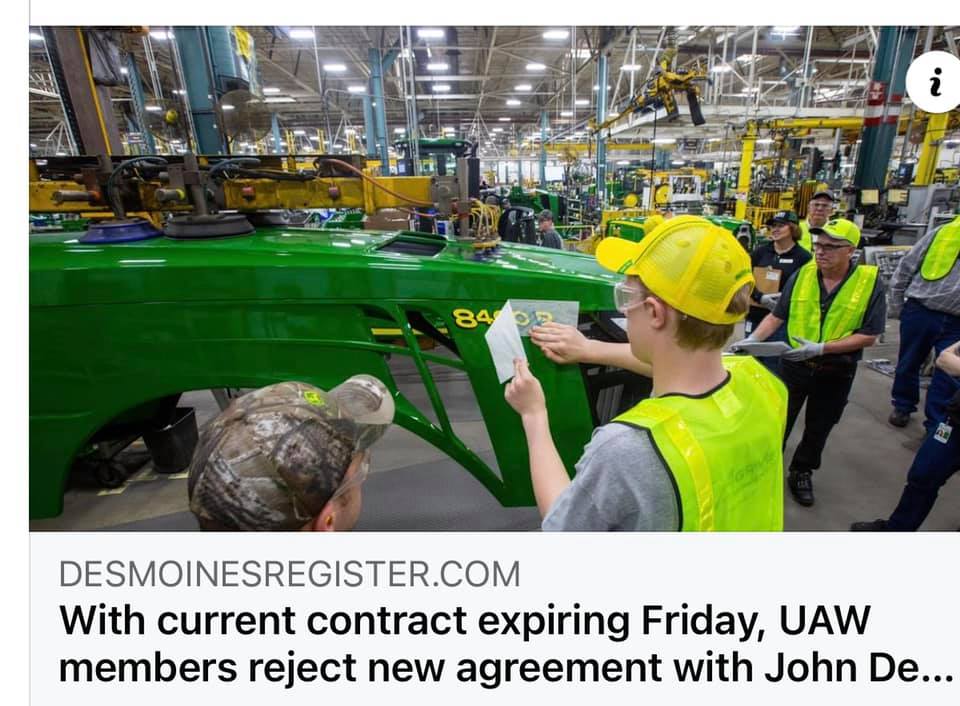 UAW Vice President Chuck Browning, who has led negotiations with the company, said in a statement that 90% of the Union’s Members voted against a contract that the two sides proposed.

The UAW represents 10,100 Deere Employees across Iowa, Illinois and Kansas - about 61% of them at Iowa factories.

Browning said UAW International Staff, along with Presidents and chairs of nine Locals, will return to the bargaining table today (Monday, October 11th).

Some Locals in Iowa posted on Facebook that Workers will go on Strike if Deere doesn't meet the UAW’s demands by the end of Wednesday (October 13th).

Many Workers who spoke to The Des Moines Register on Sunday said they wanted the Union to go on Strike.

The last Strike among Deere Workers was in 1986 after the company laid off thousands of Employees during the Farm Crisis.

Deere executives said Sunday night that they will hear the UAW out.

"John Deere remains fully committed to continuing the collective bargaining process in an effort to better understand our Employees’ viewpoints," company officials said in a statement. "In the meantime, our operations will continue as normal."

All of the Locals in Iowa roundly rejected the agreement, with each voting no by more than 85%.

Throughout Sunday, Members loudly protested the proposed contract, which called for modest wage gains and enhanced retirement benefits - at the cost of future Workers.

On the drive into Des Moines' Saydel High School, where Deere's Ankeny Employees voted, someone planted signs reading: "REJECT THIS PIECE OF TRASH" and "YOU DESERVE BETTER."

Members yelled at him about a 2018 vote, when Union Delegates approved a 31% pay hike for UAW Leaders, according to videos of the event provided to The Des Moines Register.

In East Moline, another video showed, an Employee asked Union Leaders why the UAW hadn't told the Members to walk after Workers voted to authorize a Strike in September.

The vote comes as Deere takes in record profits, fueled by high corn and soybean prices.

The company projects it will earn $5.7 to 5.9 billion this fiscal year, which ends in November.

That would be at least 61% higher than the company's previous record year in 2013.

At the same time, Deere managers say they are struggling to hire enough Workers.

To Continue Reading This Labor News Story, Go To: www.desmoinesregister.com/story/money/business/2021/10/10/uaw-united-auto-workers-members-overwhelmingly-reject-john-deere-contract-sunday/6020190001/