âWe Didnât Know If We Were Going To Die Or Not, But We Worked Through It, We Went To Work, Every Dayâ - CWA-Represented Catholic Health Caregivers Unveil âCOVID Heroes Wallâ As Strike Continues At Mercy Hospital In South Buffalo 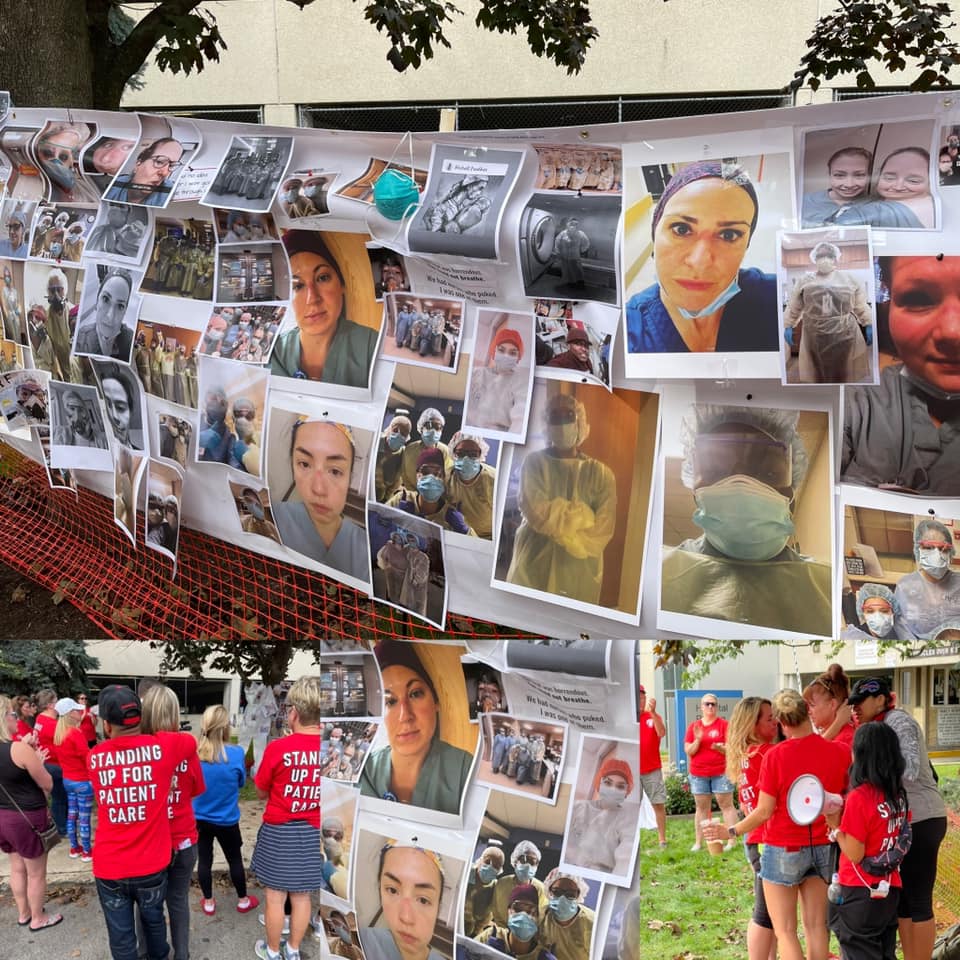 (BUFFALO, NEW YORK) – The many photos taken of Communications Workers of America (CWA)-represented Mercy Hospital Workers during the COVID-19 Pandemic that combined to create a COVID Wall of Heroes set the stage for an emotional Sunday afternoon (October 10th) of personal stories told by those who now walk a picket line outside the South Buffalo Medical Facility in a fight for better and safe staffing and a fair contract.

The Catholic Health Workers shared their experiences of contracting the virus on the job due to the scarcity of Personal Protection Equipment (PPE), a lack of essential supplies to care for patients, and being thrown into situations where they were not fully trained for the work or had to care for an overwhelming number of patients due to Catholic Health’s staffing crisis. 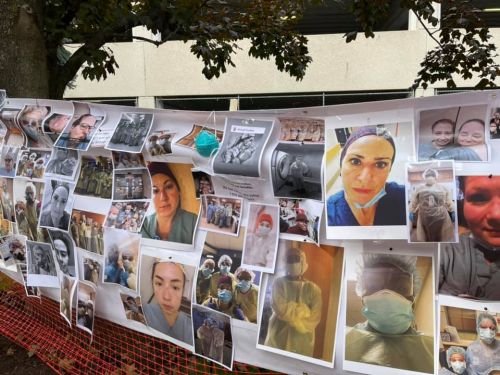 Nearly 200 submitted photos for the COVID Wall of Heroes - pictures the Workers took of themselves during the height of the pandemic alongside their written comments and stories, and photos honoring colleagues who were lost due to COVID-19. 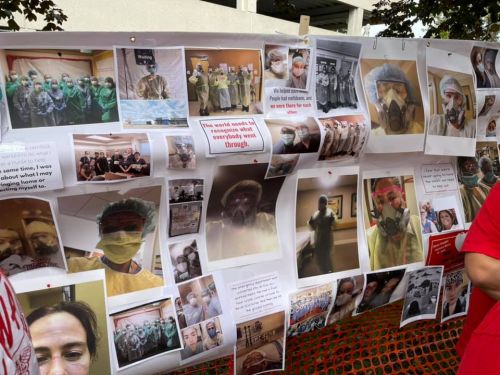 It became so emotional at times that the bodies of some of those who shared their stories shook so noticeably that several of their fellow Nurses moved forward and wrapped their arms around them in not only a sign of physical and mental support, but as a renewed commitment to make sure what they have already and continue to experience will never happen again.

“I ‘saw a whole lot of suffering,’” said Jackie Ettipio (pictured below), President of CWA Local 1133, whose 1,900 Members began their 11th day of their Strike on Monday (October 11th). 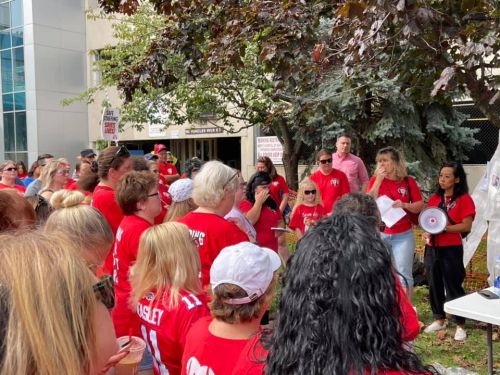 “How ‘we had to put a phone in a (plastic) baggie so our COVID patients could say goodbye to their loved ones.’  ‘But we came together and did everything we could for each other and our patients.’  ‘And it was incredible.’  ‘We stuck together.’  Now, looking at this wall, ‘we want everyone to know what we are fighting for.’  The community ‘is with us and we are doing this for the love of other people,’” said a tearful Ettipio, a 30-year Registered Nurse (RN) who works at Mercy Hospital. 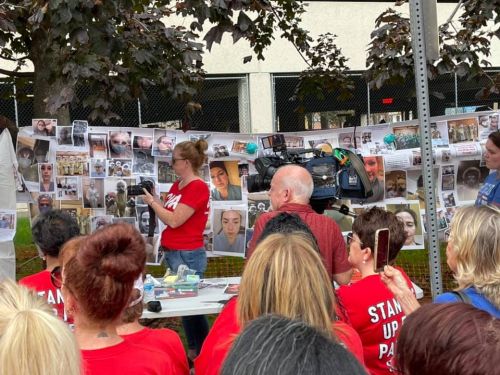 “This ‘has been an emotional time,’” offered Cori Gambini, President of CWA Local 11668, whose Union represents Catholic Health System Caregivers at the Suburban St. Joe’s Campus, a hospital that was transformed into a COVID-only facility during the pandemic.

“You were ‘all amazing.’  ‘I’ve heard the cries’ of our Members and I’ve been left thinking: ‘How the hell do we help these people?’  ‘We are standing by you.’  ‘I look at these photos and see the marks (pressure sores) on their faces.’  ‘We didn’t know if we were going to die or not, but we worked through it - we went to work, every day.’  ‘We agreed to extend our contract, but Hospital Administrators turned their backs on us.’  ‘We’re fighting not only to keep our patients safe, but ourselves.’  ‘For every mark I see (on the photos of the faces of the Nurses on the wall), we’re not going back until you guys get what you want,’” Gambini, an RN herself, said. 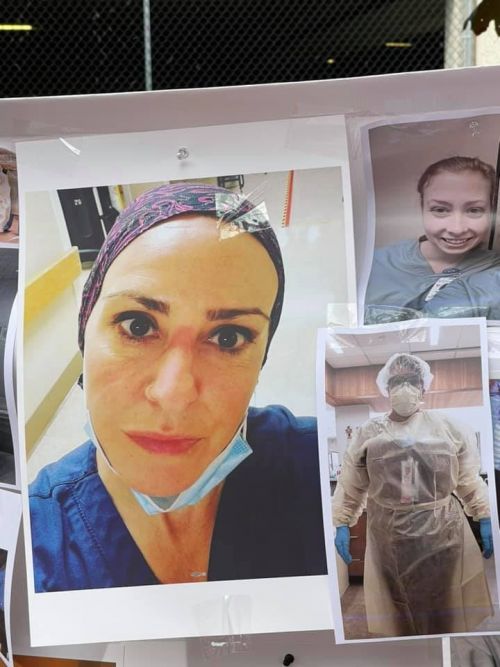 Their voices cracking, many cried while speaking through a bullhorn to address the 100 or so who’d gathered to listen, including CWA Local 1133 Vice President Carrie Dilbert: “I see the ‘pressure sores’ on their faces (in the photos).  Catholic Health ‘was not providing what we needed and this is proof what is going on behind their closed doors.’” 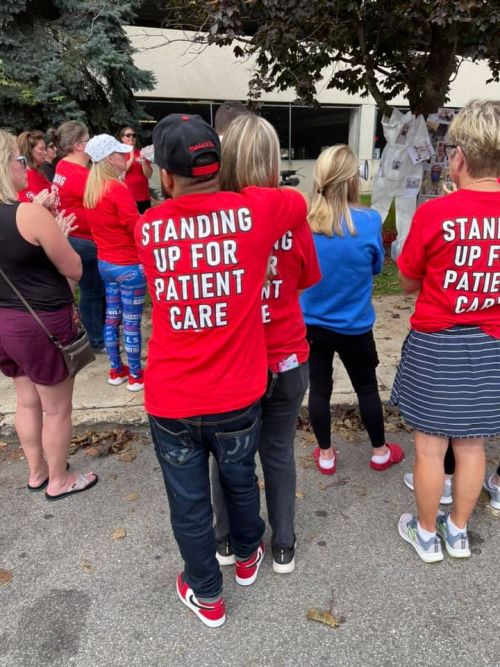 “A number of these Nurses on this wall ‘are in my’ Unit,” said Corey Webb, an RN at Mercy Hospital.  “We ‘begged’ Catholic Health ‘for help, but we were told it was a logistical nightmare’ (getting the PPE needed by Nurses to do their jobs).  ‘This is why so many (Nurses) have quit.’  ‘This why so many (Nurses) have had (mental) breakdowns.’  But Catholic Health ‘didn’t care.’  ‘It fell on deaf ears.’  ‘But we are done with you.’  I am a Member of the (CWA) Negotiating Team ‘and we will fight for all of you.’”

Heather Lawrence, an RN at St. Joe’s, said: “We worked in an ‘all-COVID’ hospital.  ‘We found out by watching the (local) news.’  ‘Nearly all (Nurses at the hospital) signed on.’  ‘It was like a military hospital in a war zone and we were scared of taking it home to our families.’  They called us ‘heroes.’  ‘We worked twelve-plus-hour shifts, with little (not enough) PPE.’  ‘We couldn’t take a sip of water or take bathroom breaks’ (while wearing protective gear to administer to COVID patients).  ‘After our heroes’ work was done, I guess (Catholic Health) didn’t need us.’” 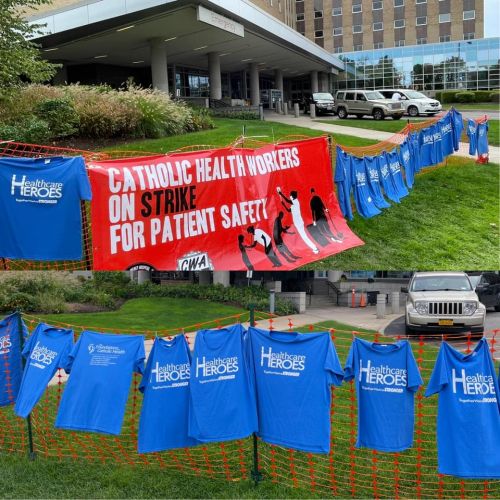 Some progress was said to have occurred during bargaining sessions that were held last week, but apparently not enough for both sides to come anywhere near a final agreement that could be presented to striking Caregivers.

If anything, the multitude of support the CWA has received from the Buffalo Community and local Labor, which turned out in force last week - as many as 3,000, to take part in a candlelight vigil held outside the South Buffalo hospital shows it is more than just the Union and the Caregivers they represent who support safe staffing and a resulting fair contract for the 1,900 Healthcare Heroes who continue to walk the life for themselves and their patients. 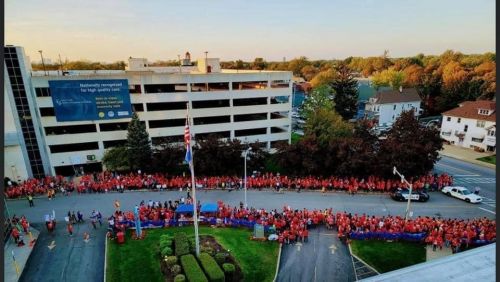 WNYLaborToday.com Editor’s Note: All the photos that appear with this Labor News Report were taken by Your On-Line Labor Newspaper but the last – of the crowd taking part in last week’s candlelight vigil.  That photo is courtesy of the CWA.