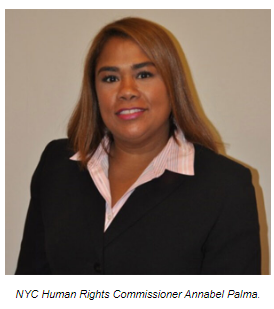 Palma will now lead enforcement of New York City’s Human Rights Law - considered one of the most comprehensive Civil Rights Laws in the Nation.

“From fighting inequities laid bare by COVID-19 to her work launching critical programs at the Department of Social Services to representing her community in the City Council, Annabel has dedicated her career to making government work better on behalf of the most vulnerable New Yorkers,” said Mayor de Blasio said in a statement.

“As Commissioner and Chair of the New York City Commission on Human Rights, Annabel will continue to use her talents to protect the Civil Rights of all New Yorkers,” he said.

Palma most recently served as the Chief Equity Officer of the City’s COVID-19 Test & Trace Corps, where she worked to get New Yorkers across the five boroughs vaccinated.

“Whether as a Nursing Assistant, a Union Organizer or Council Member, Annabel has a proven track-record of fighting on behalf of communities.  Her experience and commitment in this fight make her the perfect choice to lead the City’s Commission on Human Rights,” said Deputy Mayor for Strategic Policy Initiatives J. Phillip Thompson.

“In her role as chair and commissioner, I am confident that Annabel will work tirelessly to ensure all New Yorkers are aware of and protected by the city’s Human Rights Law.  New Yorkers are lucky to have a Civil Rights champion like Annabel on their side,” Thompson said.

Palma served her community as a Nursing Assistant and was elected a Union Representative in 1994.

In 1998, Annabel enrolled at Monroe College and earned her Associates Degree in Business Administration, while she worked a full-time job and raised her son.

After her service in the City Council, Palma was appointed by Mayor de Blasio to serve as Deputy Commissioner of Strategic Initiatives in the Department of Social Services-HRA/DHS.

To Directly Access This Labor News Report, Go To: www.laborpress.org/former-1199seiu-organizer-is-nycs-new-human-rights-chief/