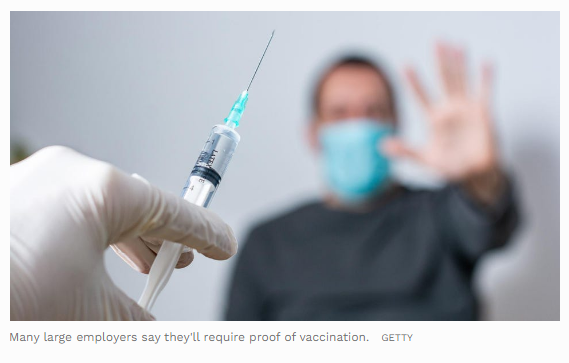 As businesses and lawmakers increasingly require Workers to get a COVID-19 vaccine, thousands of holdouts are losing their jobs - and likely can’t collect Unemployment Benefits.

However, there may be exceptions, depending on a Worker’s situation, according to employment experts.

Some State Legislatures are trying to change their rules altogether.

“If you don’t want to be vaccinated, don’t have a religious or disability exemption, and you lose your job, chances are you will be found ineligible for unemployment compensation,” said Christopher Moran, a partner and employment attorney at Law Firm Troutman Pepper Hamilton Sanders.

And Kaiser Permanente, which is based in California, said it put more than 2,200 Employees on unpaid leave nationwide.

In all these cases, the Employees affected represent a small share of the companies’ overall workforce.

But the issue may soon affect many more people - about 46% of organizations plan to institute a vaccine mandate, according to survey published by Gartner, a consulting firm, last month.

The U.S. Department of Labor is also soon expected to issue a rule mandating vaccines (or regular COVID testing) among businesses with at least 100 Employees.

The White House is also requiring vaccines for all Federal Workers, contractors who do work for the Federal Government and Health Care Workers at facilities receiving Medicare and Medicaid reimbursements.

Earlier this year, 28% of employed Americans said they wouldn’t get a COVID vaccine - even if it costs them their job, according to the Society for Human Resource Management.

The group surveyed 1,000 people in January and February.

Workers qualify for Unemployment Benefits in cases of “eligible job separation,” according to Anne Paxton, an Attorney and Policy Director at the Unemployment Law Project, which represents individuals in appeals cases when their benefits have been denied.

States somewhat differ in their definitions.

In most, Workers can collect benefits after they are laid off, quit a job for “good cause” or get fired for a reason other than “misconduct,” Paxton said.

However, a Labor Agency would likely deem refusal to comply with a vaccine mandate as “misconduct,” she said.

Losing one’s job as a result would therefore likely disqualify a Worker from benefits (if the refusal hadn’t been for a medical or religious reason).

Similarly, quitting to avoid a mandate would also likely not be viewed as “good cause.”

To Continue Reading This Labor News Report, Go To: www.cnbc.com/2021/10/07/fired-for-refusing-a-covid-vaccine-you-likely-cant-get-unemployment-benefits.html