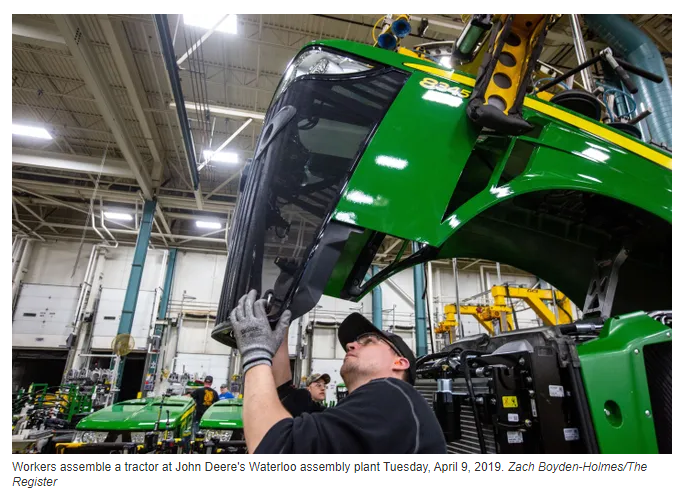 The UAW, which represents thousands of Workers in Deere's Iowa facilities, offered no details about the agreement in a news release, saying only that the deal includes "significant economic gains."

The UAW and Deere began negotiating in August, as the company celebrated record profits while still struggling to hire enough Workers to meet booming demand.

The Union will present the terms of the new contract to members by October 10th.

It is subject to a vote by the Workers.

Minutes after the previous six-year contract expired, UAW Locals began posting on their Facebook pages that the Union and the company had agreed to temporarily extend the previous contract as they continued hammering out a new deal.

Inside the factories, Deere Employees, who had voted to authorize a Strike - if necessary, halted their work, only to resume a short time later.

The UAW represents 10,100 Deere Employees across Iowa, Illinois and Kansas - about 61% of them at Iowa factories.

Under the just-expired contract, minimum starting wages at Deere range from $19.14 to $30.04 an hour, based on experience.

The UAW and Deere began negotiating as the company, based in Moline, on the Illinois side of the Quad Cities, celebrated its most profitable year ever.

The manufacturer reported $4.7 billion in net income for the first nine months of the fiscal year, which ended on August 2nd.

To Read This Labor News Story In Its Entirety, Go To: www.desmoinesregister.com/story/money/business/2021/10/01/john-deere-strike-avoided-uaw-union-agree-extend-labor-contract-negotiations-continue/5943017001/