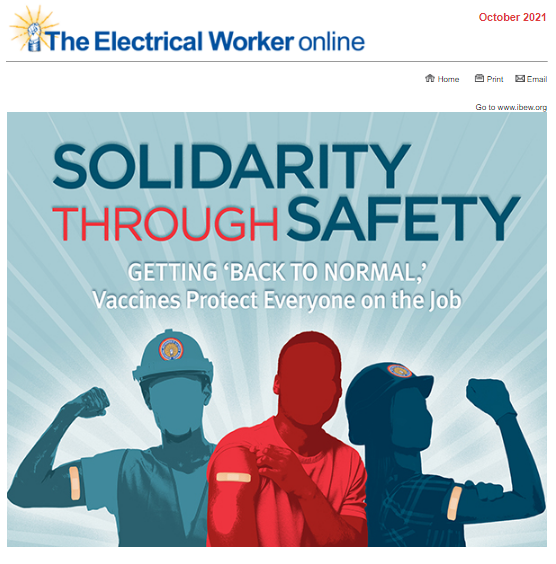 The COVID-19 vaccine is a modern medical miracle, the result of a decade of American-led research into mRNA vaccines and a half decade of research into SARS and Coronaviruses.

Its rollout was a bipartisan triumph, developed under a Republican President, distributed under a Democrat, and nearly every dose used in the United States was developed and produced in a facility built and maintained by the International Brotherhood of Electrical Workers (IBEW).

At the beginning of September, nearly 180 million Americans had received full doses of the vaccine and the evidence is clear that they work far better than even the most optimistic of Epidemiologists had predicted.

In August, the U.S. Food & Drug Administration (FDA) gave full approval to the Pfizer vaccine for people over the age of 16 and was expected to follow course with the Moderna and Johnson & Johnson vaccines in short order.

Side effects have been mild and rare and breakthrough infections even rarer.

And when a vaccinated person is infected, the course of the disease is far less severe than when it is allowed to run its natural course.

"These vaccines are one of the greatest scientific triumphs since America landed the Apollo missions on the moon," IBEW International President Lonnie Stephenson said. "I could not be prouder of the IBEW's involvement in bringing them to the world."

But to interrupt the spread of the virus, 80%-to-85% of the population must be vaccinated.

As of late Summer, that number had stalled at only about 50%.

For many reasons, some more scientifically grounded than others, a significant portion of the population hasn't been vaccinated, including some IBEW Members.

According to a Carnegie Mellon study published in August, Construction Workers had the lowest vaccination rate of all occupations.

That has to change.

"I’ve been telling people - and this is a charged deal, I know - if you don't have a real health or religious reason by the end of this year, if you don't have the vaccine, you will not have any place to work," said Orlando, Florida IBEW Local 606 Business Manager Clay McNeely.

The largest employer in his jurisdiction, Disney, announced an agreement with Service Unions representing nearly 40,000 Workers that will require vaccinations.

It isn't hard to predict what’s next.

"They haven't imposed a site-wide rule yet, but Federal properties are doing it already and I just can't see any other way it will go," he said.

To Continue Reading This Labor News Report, Go To: www.ibew.org/articles/21ElectricalWorker/EW2110/Vaccines.1021.html