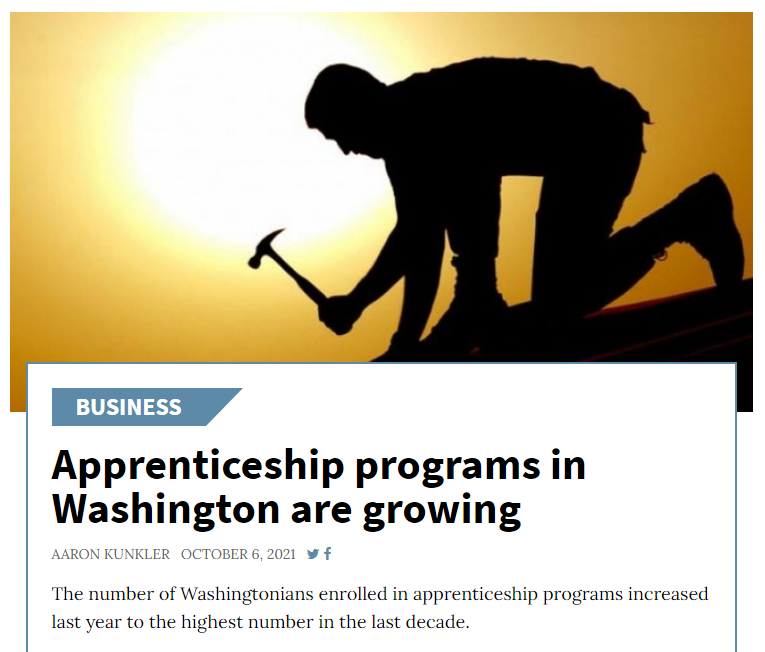 (OLYMPIA, WASHINGTON) - The number of Washingtonians enrolled in Apprenticeship Programs increased last year to the highest number in the last decade.

From September 2020 to August 2021, there were 21,710 active Apprentices in the state, up from 19,808 over the previous year and higher than in 2019.  This includes both Construction and non-Construction Apprenticeships, and 6,627 newly registered Apprentices.

“This could be a new record as we close out 2021 in terms of new Apprentice registrations,” Robbins said during a presentation to the Senate Labor, Commerce and Tribal Affairs Committee this week.

Of those enrolled in Apprenticeships, 15% are in Non-Construction Trade Occupations, and 11% are Female Apprentices.

The state has focused on increasing the amount of Non-Construction Apprenticeships, which includes programs for Cosmetology, Behavioral Health and Practical Nursing.

These non-traditional Apprenticeships are becoming more interesting to Washington employers, Robbins said: “It’s becoming a reality for employers, both public and private, if you don’t pay attention to the talent development pipeline, you’re going to struggle with talent going forward.”

Apprenticeship Programs for Electricians, Laborers, Carpenters and Ironworkers still top the list of active participants, but other non-traditional Apprenticeships like Medical Assistants, Software Developers and Workers’ Comp Adjudicators have reached the list of top 25 Apprenticeships.

The Non-Construction Trades in general have more diverse participation in Washington State.

In 2021, 31% of Non-Construction Apprenticeships were held by Women compared to 7.8% in Construction Trades.

Robbins said this could be due to an expansion of trades like cosmetology, but even the Construction Trade percentage is higher than the national of roughly 3%.

In 2022, a Pilot Apprenticeship Program with the State Department of Health is scheduled to begin for Behavioral Health Professionals and Licensed Practical Nurses (LPNs).

Cosmetology programs are also set to expand, along with training capacity for Commercial Electricians and Para-Educators.

Senator Karen Keiser, chair of the Senate Labor, Commerce and Tribal Affairs Committee, said she plans on introducing legislation to make it easier for Apprentices to turn their hands-on education into an associate’s degree.

One of the challenges is that community colleges only get 50% funding for an Apprentice who attends college, so there’s a funding disincentive to add Apprenticeship education to their roster.

Apprenticeships in the state are mostly funded by industry through employers, Workers, Unions and industry groups - however, Washington State allocated $12.3 million in State and Federal funding to expand and diversify existing programs in the 2021-23 biennium, Robbins said.

Of that, $11 million came from state funds.

To Directly Access This Apprenticeship And Training News Story, Go To: https://washingtonstatewire.com/washington-apprenticeship-programs-are-growing/