âThe Company Continues To Threaten To Send Additional Jobs To Mexico If Workers Do Not Accept Outrageous Proposalsâ - 1,400 Kellogg Cereal Factory Workers Strike Across The Country After Year-Long Negotiations On A Contract Break Down 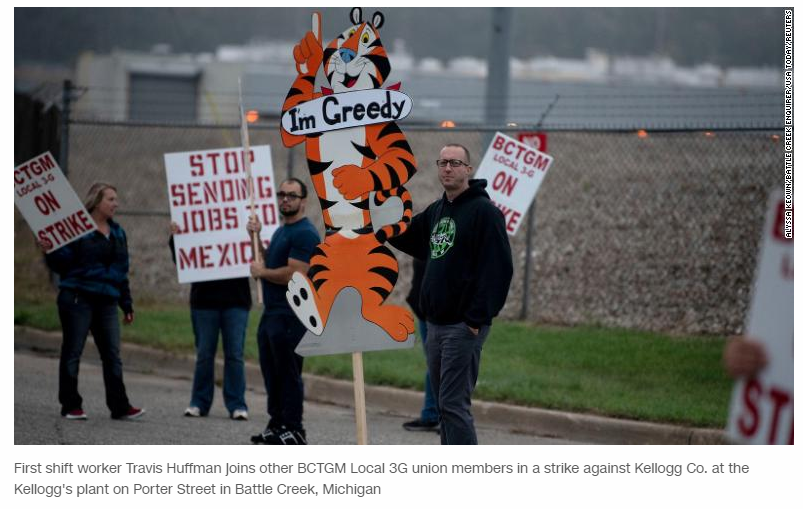 Union-represented Workers at the Kellogg Company – the maker of breakfast staples such as Corn Flakes and Rice Krispies - are on Strike after year-long negotiations between the Bakery, Confectionery, Tobacco Workers and Grain Millers (BCTGM) International Union and management broke down.

The BCTGM said in a press release that 1,400 of its Members in the company's hometown of Battle Creek, Michigan, as well as Lancaster, Pennsylvania, Omaha and Memphis, hit the picket lines Tuesday (October 5th) morning.

"For more than a year throughout the COVID-19 Pandemic, Kellogg Workers around the country have been working long, hard hours - day in and day out, to produce Kellogg ready-to-eat cereals for American families," BCTGM President Anthony Shelton said. "Kellogg's response to these loyal, hard-working Employees has been to demand these Workers give up quality health care, retirement benefits and holiday and vacation pay.  The company continues to threaten to send additional jobs to Mexico if workers do not accept outrageous proposals that take away protections that Workers have had for decades."

A shortage of available Workers much of this year, with a record number of job openings and many more Employees quitting jobs, has led to increased wages across the economy, and made more employers ready to settle with Unions - so there have been fewer strikes this year.

The Labor Department reported nine strikes of 1,000 or more Workers through the end up August, compared to 17 in the same period of 2019, ahead of the pandemic.

Kellogg had a total of 31,000 Employees as of the start of this year, according to a company filing, meaning that less than 5% of its Workers worldwide are on the picket line.

The company lists factories in: California; Georgia; Kansas; Kentucky; Michigan; Ohio; Pennsylvania; Tennessee; and New Jersey - in addition to the ones that are being struck.

Although the Union is concerned about the company shifting U.S. jobs to Mexico, many of its Foreign Employees are working providing products to overseas markets.

For the first half of this year Kellogg reported that excluding currency adjustments and special items, sales were up 2% from a year earlier and earnings were down 3%.

Overall sales for the company have been flat for an extended period, rising only 6% total in a five-year period from 2016 through 2020.

But Kellogg was trailing the broader cereal industry in its sales, especially recently.

During the early days of the pandemic, people rushed to stock up on breakfast cereals, leading to shortages in some brands.

The surge in cereal sales marked a dramatic turnaround: In 2019, industrywide cereal sales dropped 0.6%, following a 1.4% drop in 2018, according to Nielsen data.

Before the pandemic, ready to eat cereals were passed over by many consumers who were looking for fresh ingredients or ate breakfast on the go, but restrictions designed to curb the spread of COVID-19 led more people to eat breakfast at home, and stock up on familiar, shelf-stable products.

To Read This Labor News Story In Its Entirety, Go To: www.cnn.com/2021/10/06/business/kellogg-cereal-plants-strike/index.html