Speaking At A IUOE Training Center In Michigan, President Biden Says The U.S. âRisks Losing Our Edge As A Nation Withoutâ Infrastructure Investment 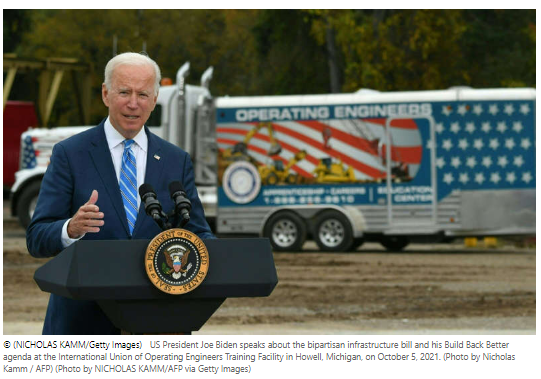 (HOWELL, MICHIGAN) – Speaking at an International Union of Operating Engineers (IUOE) Training Center in Howell, Michigan earlier this week, President Joe Biden delivered a dire warning about the status of America and American competitiveness if his infrastructure and domestic spending packages do not win Congressional approval, saying "we're at an inflection point" and "we risk losing our edge as a Nation" and being surpassed by other nations if the investments are not made.

"These Bills are not about Left versus Right or Moderate versus Progressive or anything that pits Americans against one another.  These Bills are about competitiveness versus complacency. They're about opportunity versus decay," Biden said during a visit to Michigan, a state he flipped from Red to Blue with a narrow victory in 2020.

Citing the U.S. slippage in world rankings on infrastructure and education, Biden said it's "about leading the world or continuing to let the world pass us by, which is literally happening."   "To oppose these investments is to be complicit in America's decline," the President added grimly.

Biden was speaking in the home district of U.S. Representative Elissa Slotkin, a Moderate Democrat who narrowly won the district carried in 2020 by former President Donald Trump.

The price of that package is being scaled back in ongoing negotiations that have taken a more optimistic turn in the past days.

As Congressional Democrats extended their self-imposed deadline for passing the two Bills to October 31st, Biden is traveling to pitch the packages to the American Public.

However, polling shows that voters are not Biden's obstacle on those issues.

A Quinnipiac University Poll released this week, for example, found that 62% support the Infrastructure Bill with 34% opposing it, and 57% support a $3.5 trillion plan to spend on child care help, free community college, Paid Family and Medical Leave and other domestic programs, while 40% oppose it.

Support is slightly less than in August, when 65% supported the Infrastructure Bill and 62% backed the bigger spending package.

The survey did not inquire about the more recent price range of the Domestic Spending Bill.

Further, the survey found, the public has at least qualified support for the sort of government spending Biden wants to help pay for domestic needs.

A minority of 24% said the Federal Government does not need to do any more to help Americans.

The President instead needs the help of two Democratic U.S. Senators - Joe Manchin of West Virginia and Kyrsten Sinema of Arizona, both of whom have balked at the $3.5 trillion price tag.

To Continue Reading This Labor News Story, Go To: www.msn.com/en-us/news/politics/biden-us-risks-losing-our-edge-as-a-nation-without-infrastructure-investment/ar-AAPaBk8