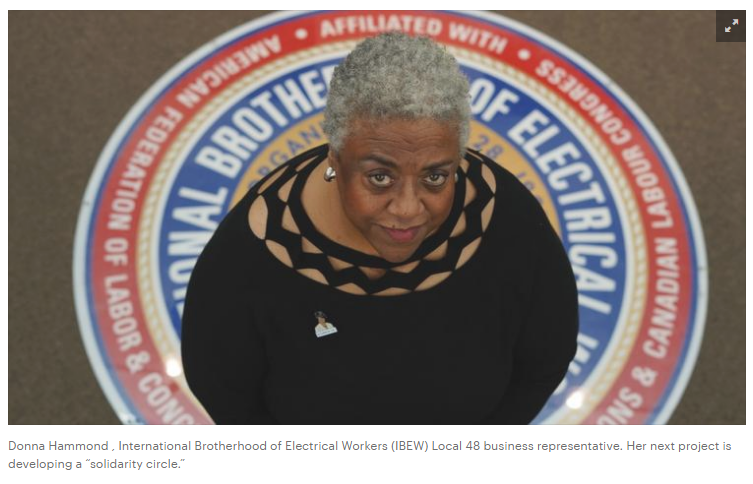 (PORTLAND, OREGON) - From being bused to a previously all-White school as a young student to having two Foremen actively try to cause her physical harm, the days of International Brotherhood of Electrical Workers (IBEW) Local 48 Business Representative Donna Hammond experiencing overt racism are mostly in the past.

Hammond hopes that sharing the experiences she’s had throughout her life and in the construction industry will help illuminate the wiring for a brighter future.

These days, part of her work as a Business Representative serving the greater Portland area is to address harmful biases that interfere with workforce cohesion.

She abides by Dr. Martin Luther King Jr.’s doctrine that “hate cannot drive out hate, only love can.”

When she was assigned an Apprentice who had been caught using the N-word on Social Media, Hammond didn’t make a snap judgment.

After sitting him down for a conversation, she determined that he wasn’t truly racist, just unaware.

She furnished a list of books, podcasts and films for him to consume to broaden his horizons and found him to be receptive.

At first the joint trust (National Electrical Contractors Association/IBEW Local 48) had been set on revoking the Apprentice’s membership, but Hammond reasoned with the committee, pointing out that this culture was pervasive within the Building Trades - and he just happened to get caught.

He was allowed to stay in the program and recently graduated into Journeyman status.

Spurred by this incident to effect greater change, she contacted a consultant to evaluate the pervasiveness of the problem and provide recommendations to the training center.

Hammond’s career in the Trades began in 1978 when she was one of the first Women, and second Black Woman, to be accepted into the NECA (National Electrical Contractors Association)/IBEW Apprenticeship.

Growing up, she was encouraged to follow whatever path she chose, with a few caveats.

Her parents were both proud Union Members and they stipulated that she get a Union job and love her occupation.

After pursuing an International Business Major at the University of Oregon and Portland State, then stints as a Garageman and Directory Assistant for US West, Hammond learned of an opening for the Electrical Apprenticeship at the Unemployment Office’s Apprenticeship division.

The office directed her to the Urban League of Portland, which helped her prepare for her interview.

In the early 1970s, just prior to Hammond becoming an Apprentice, a group of primarily Black IBEW Brothers and Sisters formed the Electrical Workers Minority Caucus.

It was through this group that Hammond was struck by the power of representation - it was the first time she had seen a Female or Black Business Manager and International Representative.

“I had no idea that was even a possibility.  I was taught I was going to be a Pipe and Wire Girl, but there are these other options out here.  Seeing someone that looked like me in those leadership roles made me see that could be an option for me,” Hammond said.

To Continue Reading This Labor News Story, Go To: https://www.bizjournals.com/portland/news/2021/10/01/changing-the-status-quo-in-the-trades-to-build-sol.html