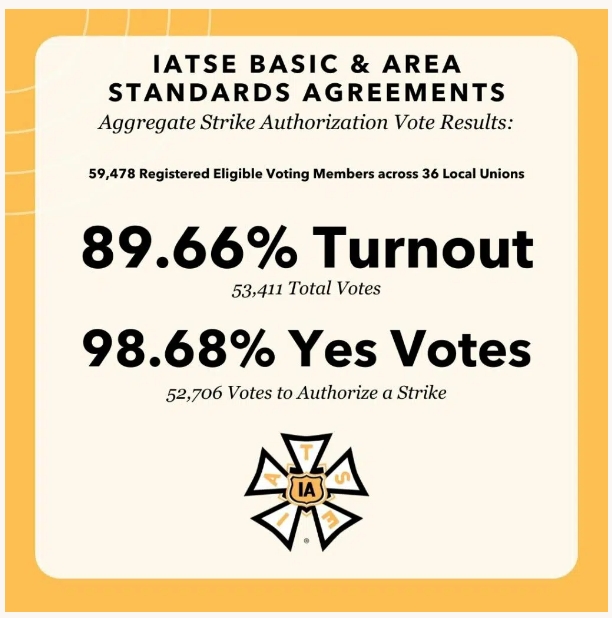 (LOS ANGELES, CALIFORNIA) - The International Alliance of Theatrical Stage Employees (IATSE) has announced its 60,000 Members, who work in television and film production across the country, have voted - by a nearly unanimous margin - to grant IATSE International President Matthew Loeb the authority to call a Strike.

This is the first time in IATSE’s 128-year history that Members of the Union have authorized a nationwide Strike.

“The Members have spoken loud and clear,” said Loeb. “This vote is about the quality of life as well as the health and safety of those who work in the Film and Television Industry.  Our people have basic human needs like time for meal breaks, adequate sleep and a weekend.  For those at the bottom of the pay scale, they deserve nothing less than a living wage.”

Beginning on Friday (October 1st) and concluding on Sunday (October 3rd), 60,000 IATSE Members who work on film and television productions received ballots and voted on whether to empower the International Union’s President to call a Strike.

In the 13 West Coast Local Unions, where Members work under the Basic Agreement, it was required that 75% of Members voting in each Local Union approve the Strike Vote for that Local Union to authorize a Strike.

The same conditions applied to the 23 Locals across the Nation located in production hubs - including Georgia, Louisiana, Illinois, and New Mexico, operating under the Area Standards Agreement.

That threshold was exceeded in all 36 Local Unions with none reporting less than 96% voting to authorize a Strike, IATSE said.

Support for Strike Authorization was more than 98% nationwide.

“I hope that the studios will see and understand the resolve of our Members,” Loeb said. “The ball is in their court.  If they want to avoid a Strike, they will return to the bargaining table and make us a reasonable offer.”

Loeb informed the Alliance of Motion Picture and Television Producers (AMPTP) of the election results on Monday (October 4th), saying he “emphasized the need for the studios to adequately address the Union’s core issues.”

In an interview in last Thursday’s Los Angeles Times, Loeb provided further information on what is required to reach a settlement.

For More On This Labor News Report, Go To: https://iatse.net/by-a-nearly-unanimous-margin-iatse-members-in-tv-and-film-production-vote-to-authorize-a-nationwide-strike/