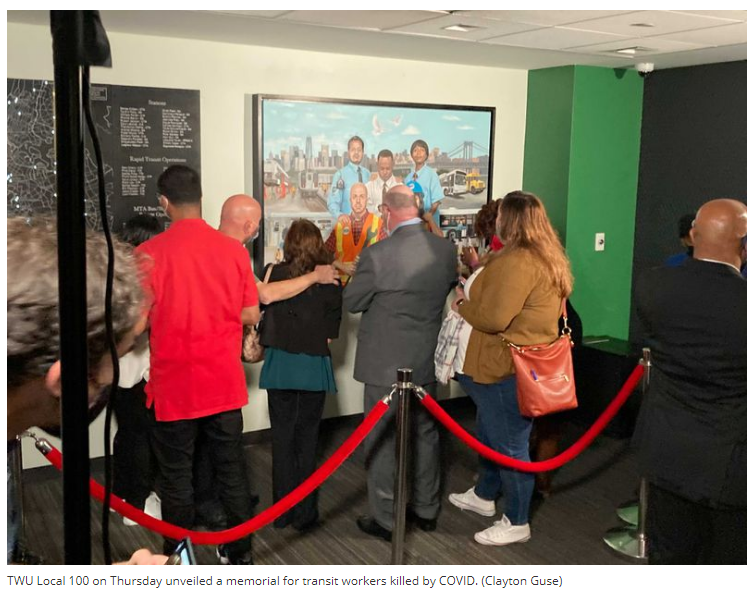 (NEW YORK CITY) – New York City’s largest Transit Workers Union has unveiled a memorial to its 110 Members whose lives have been taken by COVID-19 during a somber ceremony that featured two of the city’s most powerful politicians.

The memorial hangs in the Downtown Brooklyn Headquarters of Transport Workers Union (TWU) Local 100, which represents a majority of the Metropolitan Transportation Authority’s (MTA) 66,500 person workforce.

Transit Workers were hard hit by COVID, with at least 171 MTA Employees dying due to the virus.

The tribute includes a plaque with the names of each Local 100 Member who dies after contracting the Coronavirus and a light-up map showing where each of them worked.

The Union also commissioned a mural depicting Transit Workers on the job.

The late Train Operator Garrett Goble - who died in a subway fire in March 2020 cops say was sparked by an arsonist - also has his name on the plaque, even though he did not die from COVID.

“I remember in May (2020) I got a call, we had sixty-one Members die,” said a teary-eyed Local 100 Secretary Treasurer Earl Phillips. “It was tough for me that morning.  That was the first time on this job that I actually cried.”

Adams criticized an MTA policy from early March 2020 that prohibited most Transit Workers from wearing masks on the job, despite agency officials later saying they had a stockpile of them.

“We moved together when we fought to give you just masks,” Adams said. “The system had almost one million masks and they said you couldn’t get one.  I remember the fights that Tony and others had to have just to get the basic services as you were watching your Members get COVID and go home and potentially infect their family members.”

James urged Transit Workers to get vaccinated, which will be required for MTA Employees unless they submit a weekly negative COVID-19 test.

To Read This Labor News Report In Its Entirety, Go To: www.nydailynews.com/new-york/ny-twu-local-100-covid-memorial-20210930-vxp3okhs3nbf7lr4rsr7kty6ne-story.html